In his own words Alan Hermitage admits, “I’m a show-off and I love it, but I mean that in a good way!” And indeed, those words are true, for anyone who knows Alan knows that his joy in life is filling every little nook and cranny of his world with items he can show off.

Born in Rexton, N.B., and raised in Moncton, he spent most of his summer vacations with family here in Kent County, N.B. It was his love for the area that brought him back as a teacher in 1972. His first teaching job was in the First Nations community of Big Cove, which was later renamed Elsipogtog.

In 1973, he joined the staff at Richibucto Junior High, and later worked at our local high school, Bonar Law Memorial School, before retiring in 2001. 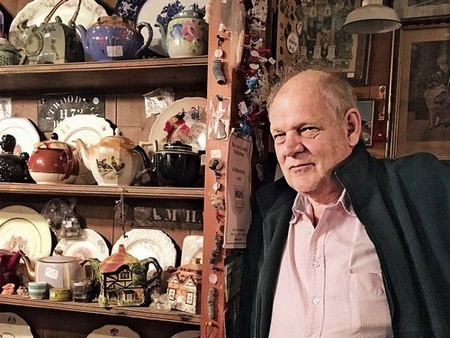 When Alan was 14, he met Margaret Hicks of Lutes Mountain, N.B. Both were students at Harrison Trimble High School when Alan asked Margaret the big question: “I am going on a bottle dig – do you want to come with me?” Margaret replied, “Sure,” and then asked, “What’s a bottle dig?”

And, as you might say, the rest is history. They were married in 1970, and their family extended to three children. Their mutual interest in antiquing grew to include thousands upon thousands of some beautiful, some charming, some unique, and some very odd items.

Thanks to Alan’s preoccupation with studying things of the past, the family spent many holidays scouting out the best treasures in New Brunswick, Nova Scotia and Prince Edward Island. When they returned from a vacation, Alan would jump in his pickup truck and retrace their journey, returning home with a truckload of new items.

Airbnb stays, are your options for staycationing this Christmas

The Fascinating History Behind One of Toronto’s Oldest Neighbourhoods

Nature’s Most Spectacular Light Show: What It’s Like to See the Aurora Borealis