If you’re reading this site and you know who Takashi Murakami is, chances are you discovered the Japanese artist and his self-proclaimed “superflat” work through a fashion collaboration.

Perhaps it was his rainbow-hued monogram handbags with Marc Jacobs for Louis Vuitton, or his signature colorful prints on a pair of Vans or emblazoned on a Supreme skate deck. Maybe you first learned about Murakami because he teamed up with Virgil Abloh for an art exhibition and soon, a collection of Off-White totes.

His work can be spotted on the covers of Complex (starring Kylie Jenner) and Pop with Britney Spears. Murakami has even walked the Macy’s Thanksgiving Day Parade back in 2010. His presence and contribution to fashion is abundant and always a delight.

His latest partnership is with Uniqlo’s UT series, which includes a collection of 18 graphic T-shirts and a plush toy that features artwork from Murakami’s large-scale painting “Anna koto iina dekitara iina.” The art was originally created for a touring exhibition in Japan, which centered around Doreamon, a cat-type robot from the famous Japanese manga series created by Fujiko F. Fujio in 1970. The collaboration with Uniqlo was exclusively released on Thursday at Uniqlo’s Fifth Avenue flagship in New York with an online and nationwide store release in May.

After weaving through the tourists outside of Uniqlo, as well as the customers and fans lined up inside the store to shop the artist’s new collection, we sat down with Murakami to learn more about his detail-oriented process behind collaborating, as well as his thoughts on resellers in the fashion and art world. 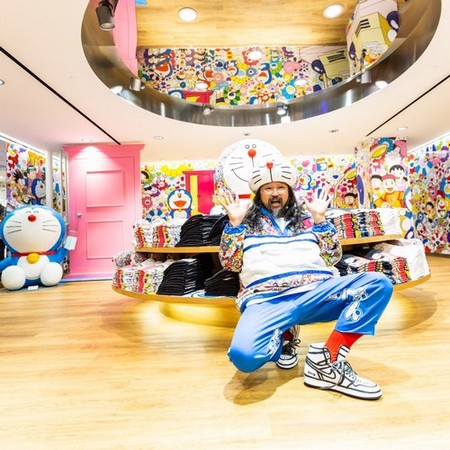 Your outfits for public appearances are always something to look forward to. What are you wearing for your event at Uniqlo?

Americans might not be able to quite get the Doraemon character but it’s such a national character and national manga, so I have to be respectful about it for the Japanese audience. My way of respecting it is to come up with a costume that reflects the collaboration. One point that I imitated is Virgil Abloh’s Off-White. I put the letters “Doraemon” on the inside of my pants. My Nike sneakers are a present from a friend.

You’re prolific when it comes to fashion collaborations, from high-end with Louis Vuitton to mainstream with Uniqlo. What’s your approach towards each one?

Basically, I approach everything with the same mentality because I really do study them seriously, so thinking about the background of the collaborator and what the context is. For this particular collaboration, the creator of this manga has already passed away, so there’s a lot on me to really research and think about this collaboration and what it should be. I really studied the manga and anime a lot.

If it’s a collaboration with people who are alive and active like Virgil and Marc Jacobs from Louis Vuitton, in that case I would just ask questions and we would exchange images and come up with a collaboration. There are some differences in the method but the difference in each collaboration is who the collaborator is, the person and what the content is. But the approach is always the same. 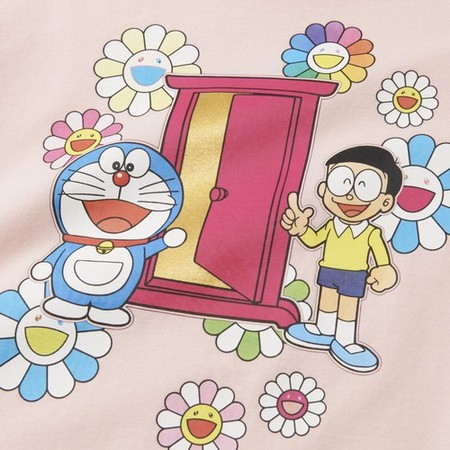 What inspires you to want to collaborate with a brand or designer, and is there anyone you still hope to work with?

If anyone wants to collaborate, maybe I will do mostly anything but not quite. If the collaboration has a reality within my context then I would probably do it. What’s common about all of the brands I’ve collaborated with so far is that they can share my idea of what the quality of the collaboration should be because I’m really, really detail-oriented. For example, the special room here at Uniqlo’s Fifth Avenue flagship, I had the wallpaper completely redone because there were some problems. Sometimes I make requests that seem like it’s a little bit too much, but I can’t collaborate with people who can’t go with me on that. Otherwise, I can’t keep up the high quality and standard that I hold.

Just looking at my work, people may not really understand how much goes into them because it might seem like a cartoon and might look easy to come up with the design, but actually, as an artist, me and my team really go in depth about how to come up with a design and composition and colors and what works. That’s how the visual of my artwork comes about, so people who really understand that and keep that standard and quality are the only people I can collaborate with.

What about this collaboration is an example of being really detail-oriented or in-depth?

The original “Doraemon” painting is huge so that’s how I made the collection and designed it and composed it. That’s what’s been used. Each time we used it for different things like the items’ hanging tags or a T-shirt graphic, if it’s cropped, then the main characters may not be in the place that I want or the flowers are not in the composition that I want. For each instance the design was used, I had to rearrange the composition, so it’s been a lot more work than it appears. 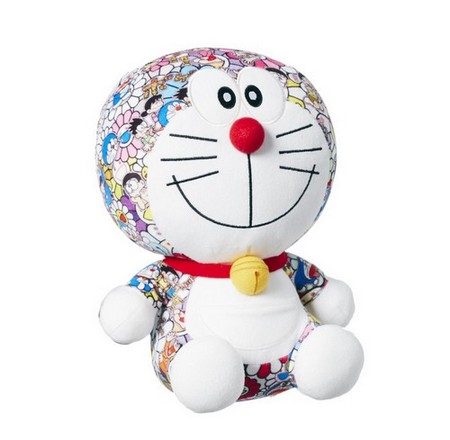 You have a huge following in the streetwear world. What are you thoughts on resellers possibly flipping product from this collaboration? (Editor’s note: The plush toy is already on eBay for up to $200 – and some signed by Murakami are being sold for about $400 and $990 – originally priced at $29.90.)

Brands like Nike are aggressively trying to combat that trend. They have the customers create accounts and there’s a specialized cart you can use and they really try to manage that. But people who are specializing in the resale market, you can come up with different rules and strategies but they will always try to work their way through it. So of course we always talk about what makes other people not able to buy something. What’s the fair way to sell product?

For example, there were a lot of people lined up here, so the store was planning to open at 10 a.m. but they opened half-an-hour early to let them come in and start purchasing. On our side, when we’re trying to sell, we have to just do our absolute best to satisfy people – even if they don’t get to buy something, they would understand that we have done our best. But of course we can’t 100-percent prevent people from buying a lot just to resell.

I also have a store in Japan and I release my own prints and a ton of resellers come and we really try to battle that but there’s only so much we can do. But I don’t mean that we should give up. We just do as much as we can do, such as pricing them at a level where that would discourage the resellers or maybe use a cart system like Nike. The point is not to criticize the resale market itself – it will be there and it won’t go away. The only thing we can do is think about what we can do to keep our brand’s standard and quality and make the customer satisfied.

See Takashi Murakami’s “Doraemon UT” collection with Uniqlo in the gallery below.