1 Put milk into a small saucepan and heat on medium heat until steamy (but not boiling). Remove from heat. Stir in the butter and sugar until the butter has melted and the sugar dissolved. Pour into a mixing bowl. Mix in yeast mixture and egg.

2 Mix in salt and cardamom. Slowly add in 2 cups of the flour. After the first two cups of flour gradually add more flour until a soft dough starts to form a ball and pull away from the sides of the bowl.

4 Place the dough in an oiled bowl, covered with a clean tea-towel or with plastic wrap. Let rise for an hour or until the dough has doubled in size. 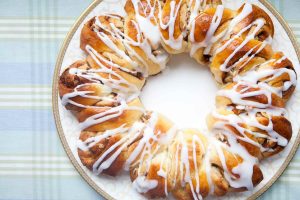 5 Press the dough down to deflate it a bit. Divide the dough into 2 equal parts. Take one part (saving the other for wreath number 2) and use your fingers to spread it into a 8-inch by 16-inch rectangle on a lightly floured, clean, flat surface.

If you are having difficulty getting the dough to keep its shape, just do what you can and let it sit for 5 minutes before trying again. Like pizza dough, the dough needs time to relax while you are forming it.

Brush the dough with melted butter, leaving at least a half inch border on the edges so the dough will stick together when rolled. Mix together the brown and white sugar and the cinnamon and sprinkle the dough with half of the mixture (saving the other half for the second batch of dough).

Sprinkle on more fillings, as you like, such as raisins, slivered almonds, or almond paste. You could even sprinkle on some cream cheese for a creamier filling.

6 Carefully roll the dough up lengthwise, with the seam on the bottom. Carefully transfer to a greased baking sheet. Form a circle with the dough on the baking sheet, connecting the ends together.

7 Using scissors, cut most of the way through the dough, cutting on a slant. Work your way around the dough circle. After each cut, pull out the dough segment either to the right or to the left, alternating as you go around the circle. The dough circle will look like a wreath when you are done. 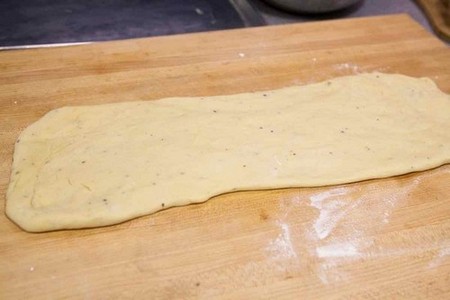 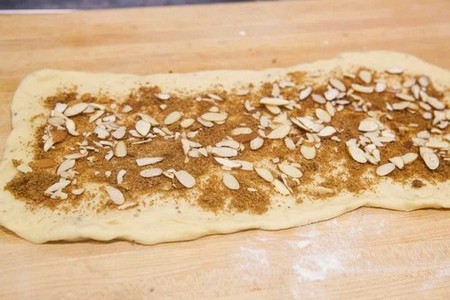 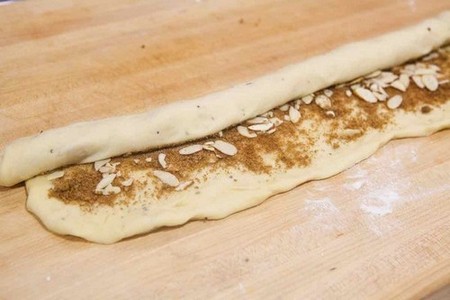 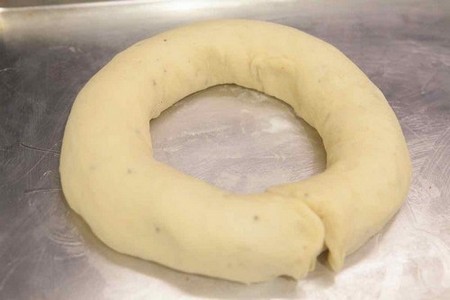 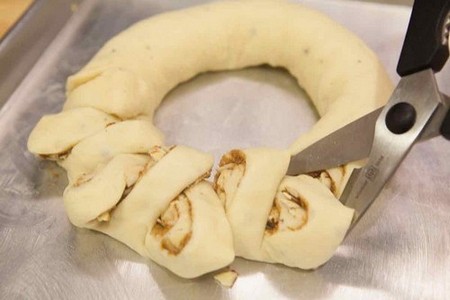 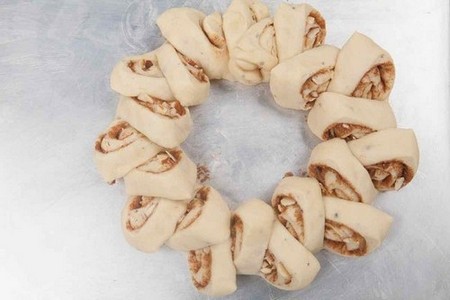 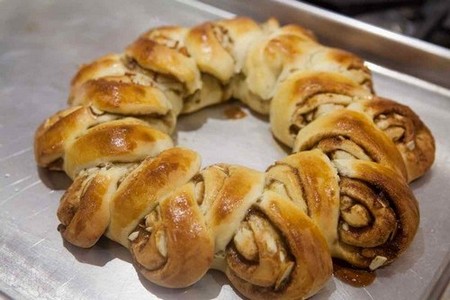 Repeat steps 5, 7, and 8 with the rest of the dough, to form a second wreath.

8 Cover lightly with plastic wrap and set in a warm area for a second rise. Let rise for about 40 minutes to an hour; the dough should again puff up in size.

9 Preheat the oven to 350°F. Whisk together the egg yolks and cream. Use a pastry brush to brush over the dough. Bake in the oven for 25-30 minutes. After the first 15 minutes of baking, if the top is getting well browned, tent with some aluminum foil.