1 Make the orange-yogurt sauce: In a bowl, whisk the yogurt, orange rind, and orange marmalade; set aside.

2 Prep the delicata squash: Heat the oven to 400°F. Line a rimmed baking sheet with parchment paper. Cut each squash in half lengthwise and use a spoon to remove the seeds.

Set the squash on the baking sheet and brush the insides and cut surfaces with olive oil. Mix together the salt, pepper, cumin, and coriander in a bowl, and sprinkle evenly over the squash halves.

3 Roast the delicata squash halves: Transfer to the oven and roast for 30 to 40 minutes, or until the halves are tender when pierced with a fork and golden brown at the edges.

If the halves have not browned, slide them under the broiler for 1 minute, and watch them carefully to avoid burning. 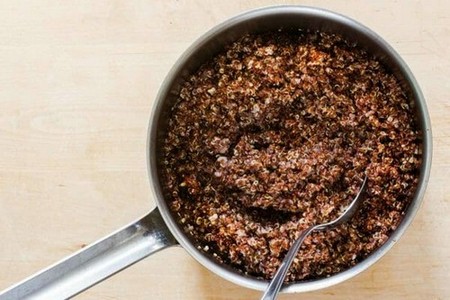 4 Cook the mushrooms: In a small saucepan (you’ll use it later to cook the quinoa), heat 2 tablespoons of olive oil over medium-high heat. Add the mushrooms and cook, stirring often, for about 5 minutes, or until they are tender. Add the soy sauce and orange rind and stir well. Transfer the shiitakes to a bowl.

5 Toast and cook the quinoa: In the same pot used to cook the mushrooms (no need to wash or add more oil), add the quinoa. Toast over medium heat, shaking the pan often, for for 3 to 4 minutes or until the quinoa starts to turn a darker shade.

Pour in the water – stand back because it will splatter – and immediately turn the heat to low. Add the remaining 1/4 teaspoon of salt. Cover the pan and cook for 15 minutes, or until the quinoa has absorbed all the water. 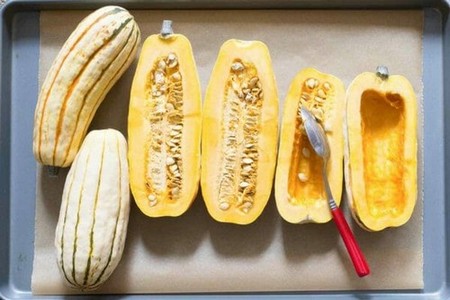 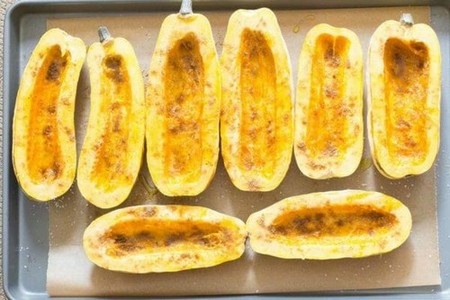 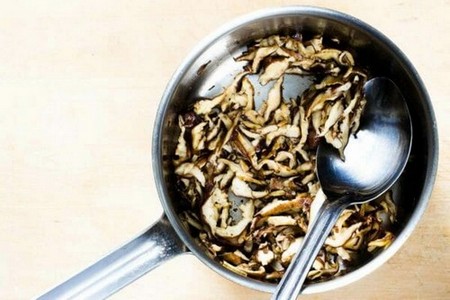 If there is water left in the pan, uncover it and continue cooking for a 2 to 3 minutes, or until the liquid has evaporated or been absorbed.

6 Assemble the quinoa: With a fork, fluff the quinoa. Stir in the mushrooms, any liquid in the bowl, and 1 tablespoon of the parsley. Taste for seasoning and add more salt and pepper, if you like.

7 Stuff the squash and serve: Fill each delicata half with some of the quinoa mixture. Sprinkle with a little olive oil (about 1 tablespoon) and the remaining parsley. Drizzle a few spoonfuls of the yogurt sauce over top and serve any extra alongside