The term ‘girl crush’ is thrown around so liberally but there seems to be no other phrase that sums up Phoebe Waller-Bridge so perfectly. Sat alongside me on the chicest of couches in the most Haute Hotel, I found her to be the funniest and most real celebrity this side of Clapham. 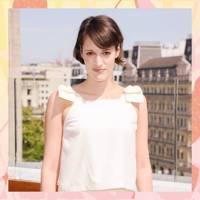 Whilst she animatedly attacks our interview with full force, I find myself imagining Phoebe slotting nicely into my life: as the perfect WhatsApp warrior when a f**k boy has done me over, my shots sister for knocking back Jaeger Bombs to get over said lad and the ultimate sounding board for debating the deep and meaningful topics of our time (more on that later!).

What makes Waller-Bridge so god damn amazing? Phoebe’s ability to encapsulate all of us with one surprising move after another – even when playing a droid in Han Solo: A Star Wars Story. 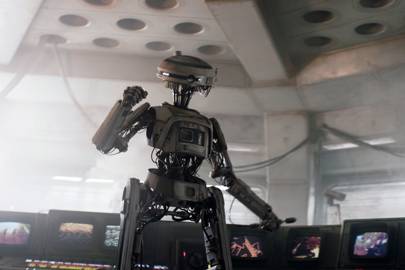 You can always rely on a sibling for a reality check, accessorised with an eye roll, and for a bus journey to produce the ultimate epiphany. A best friend’s loo can equally be a grounding space, apparently: “I was in my friend’s loo when I found out I had the part. I got the call and then walked in really slowly, with a really red face. Shocked, she said, ‘WHAT happened in there?!’” See, I told you; Phoebe is a red-faced piece of us, just humbly making her way through Hollywood.

In a world, practically another galaxy away from her pal’s lav, the corridors that surround her normality are, for today, currently the stomping ground for her co-stars, Donald Glover, Emilia Clarke and the army of publicists that come along for the Star Wars ride. Phoebe, in stark contrast to the circus that encircles her, is the definition of #grounded with the Oyster card to prove it.

Discussing her first meeting with Chewbacca, she said: “you feel so safe in his arms. You’re also slightly frightened and a bit aroused.” It’s her friendship with said co-stars that will last well into the future. 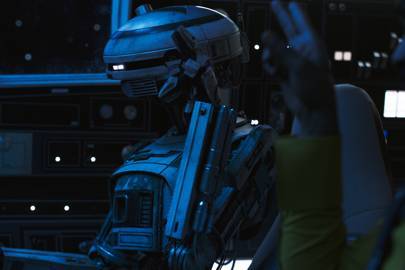 I personally spent the grand total of 1.2 seconds in the company of Donald Glover and nearly fainted, so one can only imagine the effects filming with the chap for months on end would have: “I mean, THERE’S the force. The force is trying to prevent people falling at Donald’s feet – he’s incredible. He’s so cool, funny and he’s such a big thinker. He’s got a really cool perspective on the world. I think he’s going to be king of the world!” A forceful statement but indeed, true.

“He will talk about unbelievable high concept things in the space of ten seconds in a completely unpretentious and fun way. Then he will just leave, and you are like, ‘what’s happened?’ A friend of mine called him, ‘a Philosopher King,’ after meeting him, which is so cute!”

However, the Princess to her Leia, Emilia Clarke, became the person she sought advice from, explaining: “it’s like talking to THE Google, when you are talking to Donald about philosophical conversations, so I would go to Emilia for advice on how to interpret those intense chats!”

The bond between these two ladies – who come in at wildly different comedic heights, “I am four times the size of her,” Phoebe comedically comments – doesn’t stop at the philosophical. “It was my birthday during filming and I spent weeks telling everyone. When it came to the day, no one gave me any attention and then I walked into my trailer where Emilia had this enormous cake baked especially for me. It was the most incredible thing I had ever seen, it was piled so high, it was bigger than my robot head! She’s just a giver of love and I’d like to keep her!” Now that is a pairing that is out of this world.

Imagining Phoebe, “clumping around on set,” with her aforementioned over-sized robot head is something which could easily be lifted from her comedy sketch show, Flea Bag. The image alone could garner enough comedy gold for another BAFTA win, “I wore a really flattering skin-tight lime green body sock topped off with a full heavy droid head with two tiny little eye holes and a little tiny straw hole that they would occasionally feed me peanuts through. On top of that, they’d attach metal arms and legs – basically what you see in the film, I had on me at all times!”

At least joining Star Wars means you get paid to weightlift and you can pie your gym membership, then? “I was like, ‘maybe if you just give me a trainer and then I just become really, really hot.’ I had images of becoming this hot droid. Instead, the producers said, ‘no, no, no the kind of awkward, weird, ridiculous walk you do naturally suits L-3 perfectly.” Phoebe’s comedic charm goes right to her very wires.

By this point we are both collapsed into each other, laughing away as if we have been on the Jaegers for hours but it’s only 10am when the young queen of British Comedy hits me with the punchline: “I had to have a special seat to fit my droid ass in because it was so wide!” You can take the girl out of Flea Bag, but you can’t take Flea Bag out of the girl.

If you haven’t watched the show, which peppers this piece and forged Phoebe’s golden path to Star Wars, you are seriously missing out. Every beat of Flea Bag’s narrative – which stars PWB and is written by her – strikes a cutting chord with anyone who’s mumbled through an awkward chat with a chap you have been salivating over since last summer. Ultimately, the show tackles female sexuality through the canon of comedy and presents it on a very relatable platter. It’s worthwhile noting that IRL, Phoebe is actually happily married.

But in a post-#metoo world, I am intrigued to know if there is room for freely making jokes about female sexuality. Phoebe, ever the educated one woman-wonder, pauses to find the exact words, “I feel like it was a different conversation when it (Fleabag) came out. I think the tension and the pressure-cooker feeling of needing to talk about the complexities of female sexuality and the feelings around it was at a different stage then.”

Artfully articulated in the most approachable way, she continues, “being able to talk about female sexuality openly with a sense of humour outside of the political shift that happened afterwards with the ‘Me Too’ movementand all those horrible exposés was the relief at the beginning. But now the conversation is rightfully serious and there isn’t so much room for that. I think there’s always room for humour, but we were all in such shock, especially about the Harvey allegations and everything that was exposed about the pay gaps all across the industries. It suddenly stopped being funny and I felt like I couldn’t write jokes as easily around the topic of female sexuality.”

Ultimately, Phoebe professes, “you don’t want to risk sounding like you are taking the p*ss out of something that could really be an agent for change and all these conversations could really be changing things.” Word.

Rest assured, Phoebe isn’t totally put off from tackling tricky subject matters as her latest writing project, Killing Eve, starring Jodie Comer as an security operative hunting down a badass assassin played by Grey’s Anatomy‘s Sandra Oh, is set to hit the BBC this summer. Doing her best QVC pitch for the show, Phoebe in full endearing saleswoman mode, exclaims, “I was so excited about the performances and I was so excited by the fearlessness of those two lead performances and how well they orbit each other because they are so well-balanced and FIERCE!”

Just like the droid she plays in Han Solo – who the actress says, “starts a rebellion by mistake and goes, ‘oh look I smashed that!’” – Phoebe may have accidently started a revolution in the way television deals with female sexuality, redefining our galaxy from within.

This is the feminist revolution and this your captain, Phoebe Waller-Bridge, speaking. Over and out.