The Palm Beaches in Florida has long been known as the most glamorous getaway and a legendary playground for the rich and famous. Hollywood A-listers and celebrities including the likes of Ariana Grande, Tiger Woods and the Trumps flock to their oceanside retreats, just a stone’s throw away from Miami and even closer to the Bahamas.

Having touched down in the hustle and bustle of Miami airport, I soon arrived at Eau Palm Beach Resort and Spa, where staff lined up and greeted me with a glass of champagne and citrus-infused water like something out of Downton Abbey. I could get used to this.

The hotels to stay in

The super-luxe Eau Palm, once a social club for the Rockefellers and Vanderbilts, is a cool oceanside retreat set across seven private acres of The Palm Beaches. The family-run hotel (owned by family who also own River Island in the UK) oozes luxury, resembling the grandeur of a country estate, with palatial columns and dazzling chandeliers adorning every ceiling and its own personal fragrance wafting throughout, creative exclusively for the hotel.

The 309 rooms, that come in soothing shades of seaside blue and Sicilian lemon, are designed by the acclaimed New York designer Jonathan Adler, each with Slim Aarons prints, shiny marble bathrooms and private balconies. Days can be spent getting flexible in the yoga studio or in one of the super-chic beachside cabanas where you can even have a massage. Come nightfall, I found myself at the oceanfront terrace with a cocktail, beneath the star-lit sky.

To wine and dine, I’d definitely recommend the exceptional Temple Orange where you can tuck into the freshest seafood paella, or there’s Breeze Kitchen for some simple and top-notch farm-to-table cuisine. The views from the hotel are so achingly beautiful, no wonder they see around 40 weddings a year and even more proposals. The hotel has also teamed up with the Sea Turtle Hospital to help protect endangered sea turtles who hatch eggs on the beach and we were all encouraged to close our curtains after dark so that the turtles are not misled by the light and go towards the hotel rather than the sea. 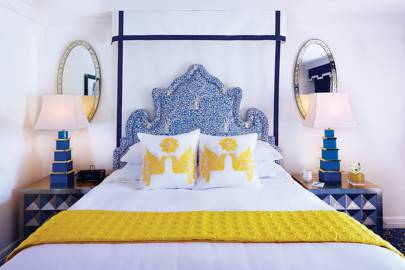 The hotel’s renown spa is definitely worth a visit too. When I turned up, I was greeted at the candlelit wishing well, where I was encouraged to light a floating candle and make a wish and was amused to find rubber ducks on each corner of this tranquil wishing well. Eau Spa takes it to the next level, with the theme of “Pause, Play, Perfect.” On entering the massage room, I was given a choice of lighting; blue, purple or orange, as well as oils; lavender, blood orange or jasmine and each lighting option even comes with a different playlist, I chose blue lighting that played calming ocean waves and lavender oil. The sensory experience is not yet over, before your massage you are offered a spoonful of honey made by Eau Palm’s very own 97-year-old beekeeper. Result? I felt thoroughly indulged and deeply pampered. You know it’s good when you wake up from an unintentional slumber.

Oh, and while you’re there you can stop by the mixologist’s bar to create your own customised scrub with ingredients on offer such as vanilla, coconut, sea berries and eucalyptus, just to name a few.

The Breakers is another exceptional place to stay and was one of the first to be built on Palm Beaches, with 30 million dollars put into the property every single year to keep it looking tip-top.

There’s some serious Roman Villa Medici influence here, Italian Renaissance architecture and vaulted gilded ceilings are seen throughout, with an incredible 72 artists having painted the ceiling in the lobby. The drive looks like something from a film, and for an epic shot, head to the most photographed area in Florida at the Breakers water fountain. Everything you could ever need has already been thought of; a barber, two exclusive ocean golf courses (buggies even have their own sound system), a family entertainment centre, 12 boutique shops, tennis courts and gaming rooms.

It doesn’t stop there, for foodies and wine lover’s there’s no limit to the choice, the most expensive bottle of wine on offer in the hotel is a staggering $22,000. The Seafood Bar stands out as exceptional, with a glass fish tank bar (literally bringing the ocean inside) and interiors designed to resemble a superyacht. As a sharing platter, the Blue Crab Nachos add a bit of colour to your table, with the most delicious cheese based sauce I’ve ever tasted.

The Breakers Spa didn’t disappoint either. Devoting itself to nurturing the mind, body and soul, expect a clean white aesthetic, with an atmosphere that seems to radiate serenity. I was given a taste of their brand new treatment that has just launched from now until December 2019, so get in there before it ends. It’s called the “Sunshine State of Mind Experience” and is three hours long and includes the following: a customised massage and facial using the Florida State Flower’s Orange Blossom oil (packed with nutrients to enhance skin’s health), as well as a manicure and pedicure to top it all off.

Between treatments you are encouraged to visit the marble steam room to fully unwind. Guilt-free mini strawberry fruit platters and salted caramel ice creams are dotted around the relaxation room, and for those with a love for fizz, there’s a whole fridge dedicated to different variants of San Pellegrino. The relaxation room opens out onto a courtyard of plush white sofa beds and swaying palm trees – you’ll never want to leave.

Where to eat and drink

Outside of the hotels, Rack’s Farmhouse Kitchen, a pastel pink Insta-friendly restaurant covered in pineapples, is worth a reservation and offers the most diverse gluten-free and vegan menu (the ‘Kale Yeah’ salad is a winner).

Juicebuzz, one of the area’s most famed juice bars, is a total must-visit too. I tried the ‘Trinity Shot’ made with green algae and spirulina which comes out completely black but promises to increase energy, improve memory and even heal wounds. I was sold (and it tasted pretty good too).

A visit to PB Catch is almost mandatory, as the ultimate seafood hotspot where just-caught fresh local oysters, clams, shrimp and fish are on the menu. His acclaimed seacuterie is not to be missed and highly recommended is the famed octopus torchon.

Things you should definitely do

The legendary Leslie Diver gives the most sensational cycling tour of The Palm Beaches, showing you some of the grandest houses around – some owners include the founder of Fiji Water, Ariana Grande, Billy Joel and many more. The Palm Beaches is an area that has the most women billionaires in America, there are twice as many police as anywhere else so security is extremely high and the largest ‘For Sale’ sign that’s allowed outside a house is about the size of a hand.

When it comes to shopping, this place is like nowhere else. Everything is pristine, with immaculately pristine, with stunning columned archways and black and white tiled floors, feeling like an indoor/outdoor destination to spend time in. The Plaza is known for having the first Gucci store outside New York. There’s even a dog groomer for the pooch in your life, a pilates studio and the Milan-inspired cafe Sant Ambroeus. For an insiders tip, head to Coyo Taco to find a secret room at the back, or Celis juice bar to order the “Chocolate Funk” with raw cacao.

For a complete body reboot, Pound class proved itself to be quite spectacular. We were given a pair of neon weighted drumsticks and instructed to hit them against each other whilst performing a fast paced cardio work out to all the latest hits. The routines were so fast and fun that it didn’t even feel like the usual chore of going to the gym. Rosemary Square hold ‘Wellness Wednesday’ classes in the car park for anyone to join. If it’s good weather you’ll be on the rooftop of the car park watching the sunset as you work out – just another distraction from the extreme cardio workout you’re doing.

How to survive the quarter life crisis at work