The infamous kissing statue known as the “Unconditional Surrender” was vandalized with the words #MeToo on Tuesday morning following the passing of WWII veteran George Mendonsa.

According to the Sarasota Police Department, officers responded to a call around 1:00 AM on Tuesday at the Sarasota Bayfront in Florida where they found the hashtag spray painted onto the 26-foot-tall statue. The red paint was on the nurse’s leg, with no evidence of vandalism on any surrounding objects, and no available surveillance video of the area. The police department estimates more than $1,000 in damage was done to the statue, based on the resources needed to repair it.

However, Sarasota news station WWSB reports that the company contracted to clean the statue, Gorilla Kleen, removed the graffiti from the statue free of charge after being alerted to the news.

Now, the Sarasota Police Department is asking that people provide any information they have on the case, while locals have sparked a debate about whether it’s time to take the statue down or not.

“Take the statue down! It may be called ‘Unconditional Surrender,’ but the circumstance was ‘Involuntary Surrender.’ She didn’t know that guy– he just grabbed her and kissed her. She said that she did not want that to happen. Stop glorifying sexual assault,” one woman wrote on the Sarasota Police Department’s Facebook post about the vandalism – referring to a 2005 Veterans History Project interview with the nurse pictured, Greta Zimmer Friedman, where she said, “It wasn’t my choice to be kissed.” 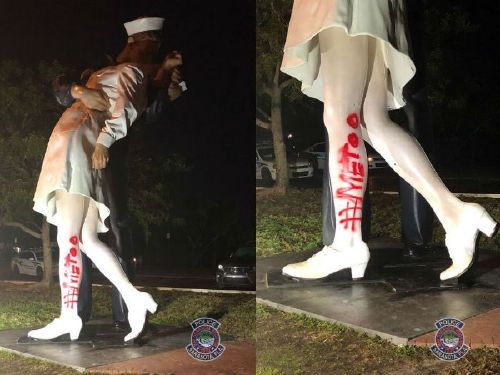 Others agreed, adding their thoughts on the police department’s Facebook post. “YES! This is so long overdue and should be removed from our city,” one wrote. “Stop glorifying the ‘taking’ of woman against their will,” another added, while encouraging others to learn more about the history of the iconic imagery.

Still, plenty of people said that the current #MeToo movement shouldn’t be used as an excuse to deface a public statue that still represents a celebratory time in America’s history.

“You youngsters just don’t understand the exuberance of the end of WWII. That may be the most celebrated kiss in history. Sorry that your lens is so distorted on this moment,” said one commenter, while another added, “There are many other ways to get your point across other than defacing a beautiful statue. This statue is about the end of the war and the happiness that was shared.”

The vandalism likely happened within 24 hours of Mendosa’s death, who is the uniformed sailor pictured, on Sunday. 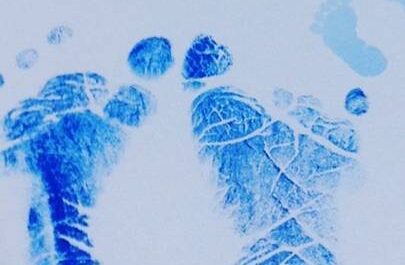