This was how greens were supposed to be served – alive, vigorous and most of all, emerald green. So you can imagine my shock when I first encountered Southern-style collard greens.

It was more than 20 years ago. I was one of the only white employees of a black-owned weekly newspaper in Madison, WI. At some point in springtime we all gathered for a company picnic, and these greens were part of the spread.

Army green, stewing in an olive drab pot liquor, with chunks of smoked pork floating around. I asked my boss, Ms. Franklin, what this was. She almost fell over laughing. “Those are collards, son! You’ve never seen collards before?”

I hadn’t, being white, from New Jersey and from a largely Italian-Jewish-WASP town to boot. Ms. Franklin explained that collards are so tough they need long cooking, and aren’t really very good without some sort of smoked pork; a ham hock was best.

And then she told me the secret to collards: It’s the pot liquor, the richly flavored, smoky soup at the bottom of the collard pot. She said that’s where all the vitamins went after you stewed the heck out of the greens. 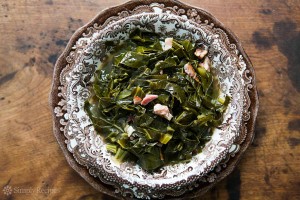 Some people reuse the pot liquor for their next batch of collards, and some add more ingredients (beans, more pork, etc) and make it a soup. Whatever you do, don’t throw it away.

Southern collard greens, you should know, are one of those recipes that has unlimited variations. Each region, even each cook, has his or her own twist. This is how we had them at our company picnics, so long ago. Or at least it’s how I remember them. Ms. Franklin’s gone now, bless her soul. This one’s for you, Betty!

While you can make this recipe with chard, kale, turnip or mustard greens, they cook much more quickly than collards, so cut the cooking time to 30 minutes.

1 Heat the bacon fat in a large pot set over medium-high heat. Sauté the onion in the bacon fat, stirring often, until the edges begin to brown, about 5 minutes. Add the ham hock, smashed garlic, chicken stock and water and bring to a simmer. Cover and cook for 1 hour. 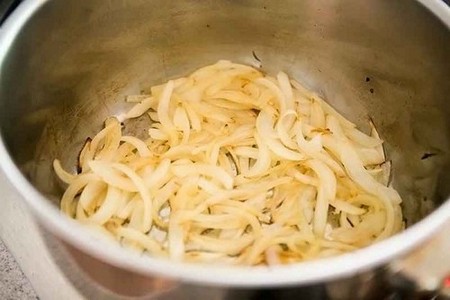 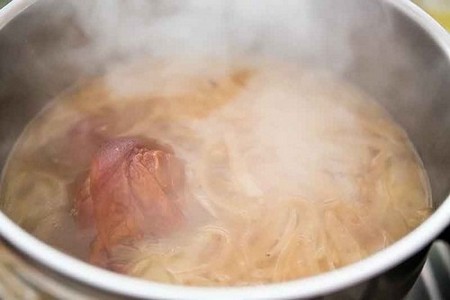 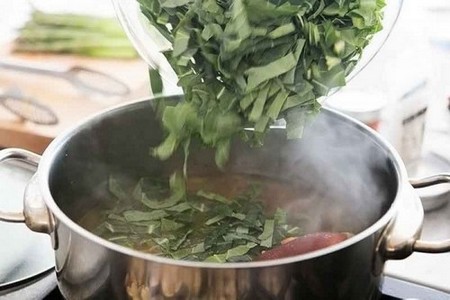 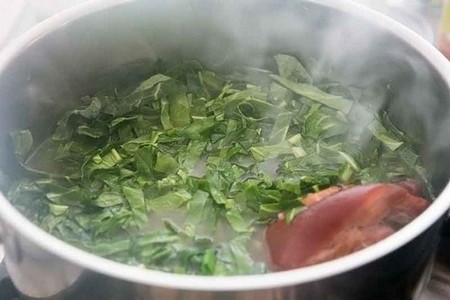 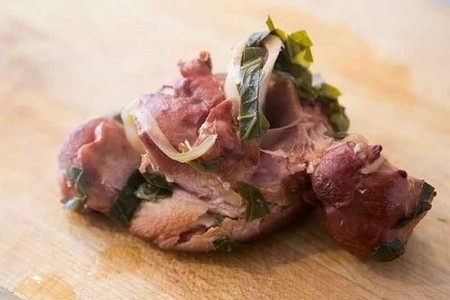 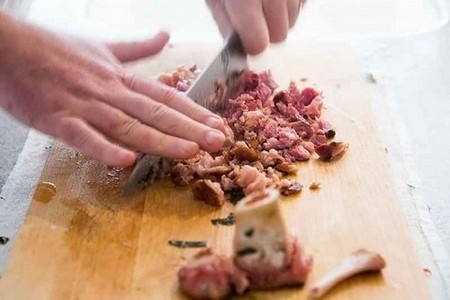 2 Add the collard greens to the pot and cook until tender, another 45 minutes to an hour.

3 To serve, fish out the ham hock, pull the meat off the bones and chop. Mix the meat back with the greens and serve with vinegar and hot sauce at the table.

Basque-Style Chicken with Peppers and Olives