The history of Snickerdoodles is a bit convoluted, but apparently, it’s related to a vintage coffee cake recipe called “snipdoodles.” This was a quick coffee cake dusted with cinnamon sugar, and Stella discovered that the recipe was super easy to duplicate just by adding some extra milk to snickerdoodle cookie dough.

Stella’s recipe for Snip Doodles calls for thinly spreading the batter on a large rimmed baking sheet, but I like to make a slightly thicker version baked in a 9 x 13 in baking pan, like brownies or a sheet cake.

This quick and easy coffee cake has the same flavor profile as snickerdoodles, as well as the same signature crinkly top. Serve it warm from the oven with a cup of coffee or hot chocolate, or just appreciate it as an afternoon snack. 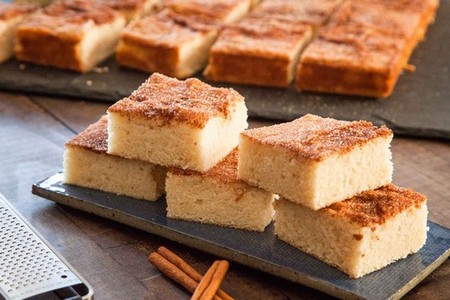 For the cake batter:

1 Preheat the oven to 350°F. Spray a 9×13-inch pan with cooking oil, then line the bottom and sides of the pan with parchment paper, letting 1-inch of the paper hang over the sides. 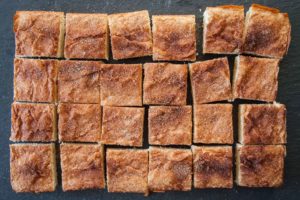 2 Make the batter. Combine butter, coconut oil, sugar, salt, baking powder, nutmeg, and vanilla in the bowl of a stand mixer fitted with a paddle attachment. Mix on low speed to moisten, then increase to medium and beat until light and fluffy, about 5 minutes, pausing to scrape with a flexible spatula halfway through.

With the mixer running, crack in the egg and continue beating until smooth. Add a third of the flour, then a third of the milk, alternating between the two, until fully incorporated and smooth. Fold once or twice with a flexible spatula to ensure the batter is well mixed from the bottom up.

Pour the batter in the prepared baking and spread into an even layer. Mix together the sugar and cinnamon for the topping and sprinkle over the top of the batter.

3 Bake the bars: Bake in the oven for 18 to 22 minutes or until a toothpick inserted in the middle comes out with a few crumbs attached.

Cool for 15 to 20 minutes in the pan then carefully remove the entire cake from the pan by grabbing the sides of the parchment paper and lifting directly up from the pan and moving the cake to a cutting board. “Snip” the cake into squares with a knife or pizza cutter. Serve warm.

Wrapped in foil, Snip Doodles will keep up to 3 days at room temperature.