A teenager, cruelly known as Snake Girl, is forced to live as a recluse due to a condition that causes her skin to bleed when exposed to sunlight.

Vedika Gupta, 13, from Indore, India, suffers from the genetic disorder ichthyosis, which has confined her to her bedroom.

She said: ‘All I can do is watch children my age play and enjoy their life.

‘I often ask myself as to why I have been subjected to this kind of punishment by God. What sin have I committed to suffer like this?’

After seeing multiple doctors who have been unable to ease Vedika’s suffering, the teenager relies on just generic body lotion to help prevent her skin drying out.

Yet, after hearing about a treatment that cured another ichthyosis sufferer, Vedika’s family are speaking out to help raise money towards the same therapy.

There are 20 different types of ichthyosis, which can affect as few as three children born a year in the UK. 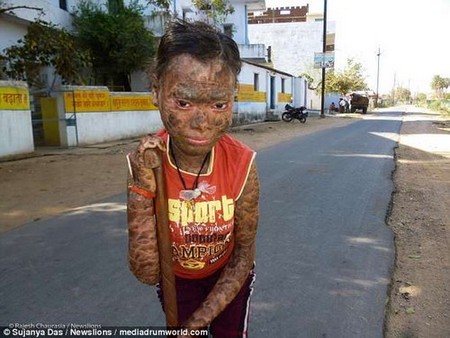 Vedika Gupta, cruelly known as Snake Girl, is forced to live as a recluse due to a condition that causes her skin to crack, flake off and even bleed when it is exposed to sunlight 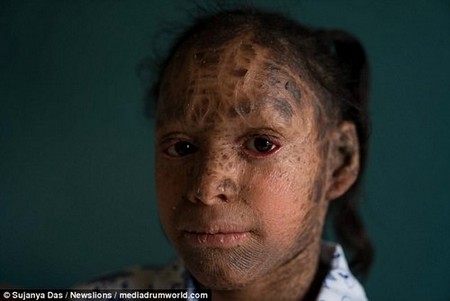 Confined to her bedroom, Vedika watches other children her age playing and enjoying life 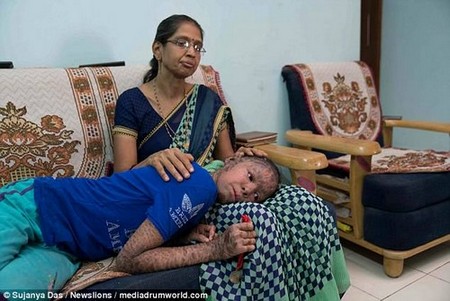 Vedika’s mother Madhuri Gupta (believed to be pictured) says all she wants is for her daughter to have a happy future. She adds there is nothing she can do to stop her anguish

Ichthyosis describes a group of conditions that cause dry, scaly skin.

It occurs when skin cells are formed faster than is required, causing them to accumulate on the skin, resulting in thickening.

In most cases, it is inherited and present at birth.

Treatment focuses on improving the skin’s condition and reducing discomfort.

This is achieved via moisturising at least twice a day.

Medication may also be required to reduce scaling.

‘When I go outside my skin peels off’

Speaking of her condition, Vedika said: ‘I cannot go out in the sun.

‘Whenever I go outside, I get a burning sensation in my skin. My skin peels off and, at times, there is bleeding.’

The teenager’s sister Sunidhi, 20, suffers from the same disorder and has also become a recluse; turning down parties and events out of the fear of what other people may say.

Their mother Madhuri Gupta, 45, said: ‘My elder daughter, who also has the same skin disorder, keeps herself confined in her room.

‘She is now a grown woman conscious about her looks and appearance. Hence, she avoids socialising, interacting with people or even coming in front of the camera.’

After conventional treatment failed to ease the sisters’ symptoms, they turned to homeopathic remedies, which only made their disorder worse.

Madhuri said: ‘It aggravated the condition.

‘It became so bad that the girls would have constant itching and occasional bleeding from the skin cracks.’ 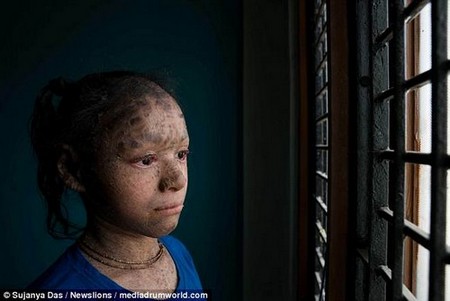 Vedika spends her time studying, painting and watching television without any company 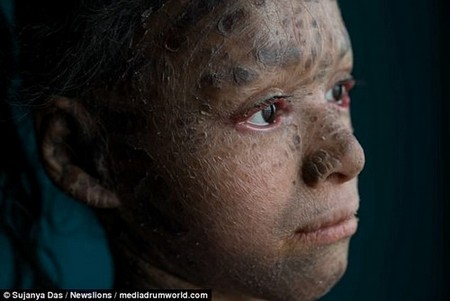 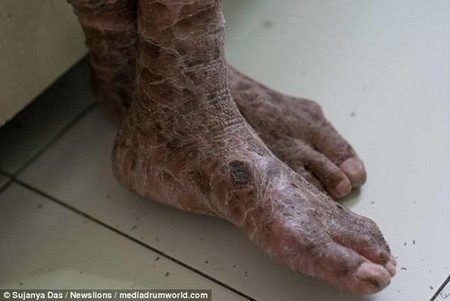 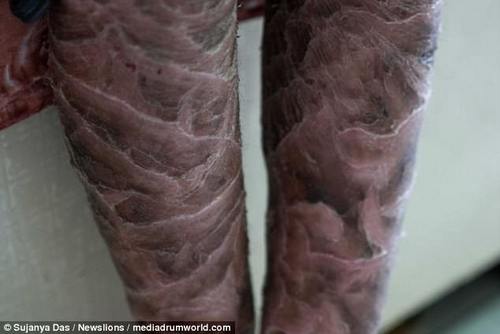 The disorder also affects her sister Sunidhi, 20, who is too self conscious to be photographed

‘All I want is that my daughters don’t suffer’

The family had given up hope until they heard about Shalini Yadav, from Madhya Pradesh, India, who suffered from the same condition.

Madhuri said: ‘She was taken to Spain and treated by doctors there.

‘We have been told the doctors have shared the formula of the medicines with an Indian Pharma company and the medicine will be available in India, too.

‘All I want is that my daughters don’t suffer in the future.

‘At home, I keep my daughters in comfort, but outside the struggle that they face, I cannot do anything about it.’

She tried to use homeopathic remedies, however, these aggravated her skin even more

She says that even if her skin improves by just 50 per cent, it will give her a confidence boost 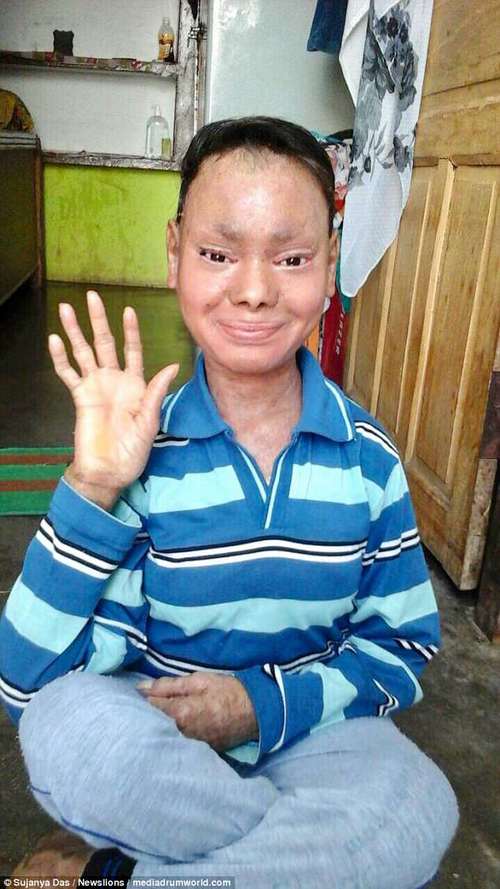 From a poor family, Vedika’s father is appealing for people to donate towards her treatment

‘If I get help, I can lead a life of dignity’

Vedika said: ‘If I get help like Shalini got, I can lead a life of dignity.

‘If there is any treatment that helps improve my skin condition by 50 per cent, it will give my confidence a boost.’

Shalini was treated for free at Regional University Hospital and Virgen de la Victoria of Malaga after she was helped by the India-based press agency Newslions, when its owner Sanjay Pandey heard about her plight.

Vedika’s father said: ‘I have spoken with the father of Shalini Yadav.

‘I am now hopeful that finally there will be a proper treatment of my daughters. I will do whatever I can.

‘I am told that Shalini’s treatment was an expensive affair and I am afraid I don’t have that much money to fund the treatment.

‘Hence, I request all the kind souls out there to come forward and pitch in for the treatment of my daughters.’

Find out how to donate here.

Just one puff of cannabis found to reduce depression