While you are at it, ask them to remove the skin and any pin bones. Removing the skin means that side can absorb some of the glaze during cooking, and pin bones can be annoying to pull out yourself at home. (It’s also fine to cook the salmon with the skin on; it just won’t get quite as flavorful throughout.)

If you end up needing remove the pin bones yourself, try this trick: Lay the salmon on top of an upside-down bowl so the fish is convex. Run your fingers along the length of the fish to find the bones – you’ll feel them poking up out of the salmon, nearly perpendicular to the surface and spaced an inch or so apart. Use tweezers or needle nose pliers to firmly grasp the tip of each pin bone and smoothly pull them out.

This is a fantastic and fancy-looking meal for company, but it’s also a great weeknight dinner option. You can coat the fish with the glaze several hours in advance, refrigerate it, and roast it later. It can also be served at warm, room temperature, or even cold.

The ease of preparation can be your own little secret!

How to Remove Pin Bones

Place a bowl upside down on a cutting board and cover with a paper towel to keep the fish from sliding. Lay the fish on top of the bowl. Run your fingers down the length of the fish to find the pin bones. With tweezers or needle nose pliers, firmly grasp the bone ends and pull them out. Dip the tweezers in a cup of water as you work to rinse away bits of bone and make it easier to grasp the next one.

A Note About Buying Salmon

Center-cut salmon fillets are best for this recipe since they are of even thickness. If you end up with a piece that is thinner on one side, you can cut it off, cook it separately, and remove it from the oven when done. Alternatively, if your salmon is skinned, you can fold the thin part over on itself so that it’s the same thickness as the rest of the salmon.

If you can, ask someone at the fish counter to remove the skin and pin bones from your salmon for you. If not, be sure to remove the pin bones yourself, but it’s fine to cook and serve the salmon with the skin left on; just pour all of the glaze over top of the salmon. (Removing it helps to flavor the salmon on all sides instead of just on top.

1 Make the glaze: In a bowl, stir together the Thai chili sauce, sriracha, lime juice, soy sauce, ginger and half of the chopped scallions. Reserve the remaining scallions for the garnish.

2 Prepare the salmon: Check the salmon for pin bones by running your fingers gently over the surface; remove any pin bones you find (see Recipe Note). Sprinkle the salmon with salt and pepper on both sides.

Spread about 1/3 cup of the glaze in the center of a 9×13-inch baking dish. Set the salmon fillet on top and move it around a little so that the bottom is coated with glaze. Spread the top with the remaining glaze. If you like, you can do this ahead, cover it, and refrigerate for up to 2 hours.

3 Slow-roast the salmon: Preheat the oven to 275º F.  Roast for 18 to 23 minutes, or until a thermometer inserted into the thickest part of the fish registers 130 degrees. (The temperature will rise a few degrees once the salmon is out of the oven.)

4 Toss the salad: In a bowl, toss the greens with the olive oil, salt and pepper. Sprinkle with the lime juice and toss again. Arrange the greens on a platter.

5 Serve the salmon: With a serving spoon, break the salmon into a few large pieces and set them on the platter on top of the greens. Scatter the cilantro, mint, and remaining scallions on top. Place the lime wedges around the fish and serve. 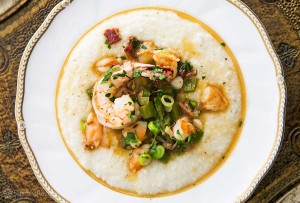 Ceviche with Avocado and Grilled Corn