For this week’s edition of our GLAMifesto For Life series, and to mark the release of her new single Summer Fling, the Scottish-born singer, 27, shares her secrets for managing her mental health, how she deals with failure and what she can’t live without.

She’ll also have you in stitches recounting what the quirkiest thing she’s ever done in the name of wellness is and the best piece of advice she’s ever received (spoiler alert, it’s to do with farting and it’s genius).
Nina Nesbitt won TikTok during lockdown with her hilarious musicals – about f*ckboys among other things – and Reese Witherspoon dancing to Long Run, a song on which she collaborated with Reese’s son Deacon Phillippe last summer.

Over to you, Nina…

What is your formula for cracking TikToK musical?

My formula for a cracking TikTok musical is find an issue, find something that needs to be addressed and sung about. I’ve done a lot about f*ckboys because I think it is a real big issue at the moment especially during lockdown. They were getting away with all sorts and I was hearing stories on my girls’ group chat, and I was just like, “These things need to be addressed.” So, find something that needs to be sung about and then add a bit of sass, a bit of savageness and just put it out there. 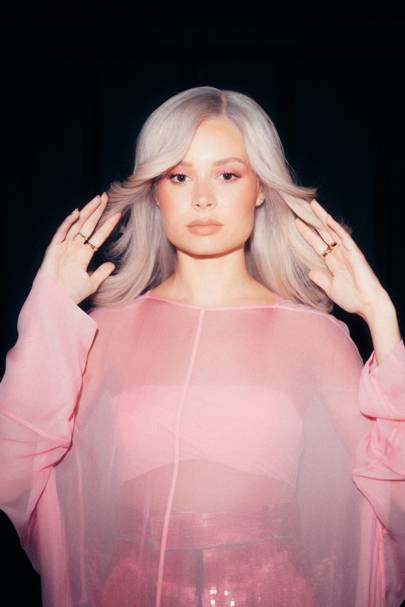 What is your daily mantra?

My daily mantra is – now this I am truly morbid – but I’m going to die one day. Because it’s inevitable for all of us. We’re all going to die, but live your life to the fullest whilst you’re here. I know it sounds cliche. But when I start getting really stressed about really minor things or just things that are so irrelevant in the grand scheme of things, I have to just stop for a second and think you’re going to die one day, this is irrelevant. Enjoy your life while you’re here, make the most of it. Stop caring about these little things, just live your best life.

How do you manage your mental health?

I definitely have waves when it comes to my mental health. Some weeks and months I’m feeling on top of the world, really confident, really happy and chilled and then other months I’m a complete mess. I think to work out a pattern is really helpful. I think to know that when you are feeling crap, it’s not going to be forever. I always have to remind myself of that and I think I’m getting better at that. I’m getting better at that with age. I think, yeah, just sitting through it, riding through it and knowing that it will pass is actually weirdly comforting.

I do feel like I’m really good at talking about mental health when it’s my friends or people online, but when it’s my own I find it really difficult. I actually got a therapistthis year, which was one of the best things I’ve ever done. 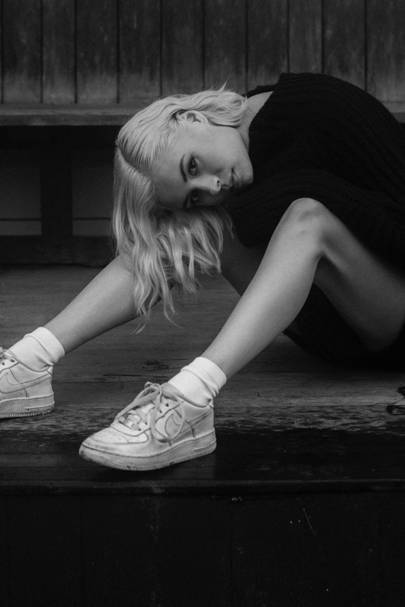 What do you think music has helped you deal with the most?

I had terrible anxiety as a teenager and music was the only thing that really calmed me down. For me, it’s almost like a form of meditation because I think meditation is clearing your mind, isn’t it? I don’t know. You’re not overthinking things and that’s what writing songs and music does for me. I forget time passes. I forget all my worries while I’m writing. It is definitely like a form of therapy for me. It’s also taken me around the world, which is amazing because I’ve always wanted to travel.

What’s the one thing you couldn’t live without?

I want to say my phone because I’m addicted to it and that’s really embarrassing, but it’s true. But then again, I took a social media break in February because I was just like, I just had nothing to post. I was sitting in a tracksuitwith my hair on top of my head, no makeupon all day and I was like, “I’ve got nothing to post. I’ve got nothing to say. I’m just going to leave social media for a bit back and live within nature.” I was going on walks every day. I was feeling great. It’s the most stress-free I’ve ever felt my life. Actually I would quite like to live without my phone, but unfortunately, I guess, my job doesn’t let that happen.

What’s the best thing that you’ve learned this year or over the last year?

I really struggled with failure as a young kid and I think it was the root of a lot of my anxiety problems because I put this insane amount of pressure on myself to succeed and exceed expectations all the time. I don’t know what that’s about. Maybe I should ask my therapist, but yeah, I think I’ve learned as I’ve got older and experienced failure, failure is actually a huge blessing because without failure there’s no success. You don’t know what success is without failing I think personally, and I think something nice and comforting about failure is the only way is up. 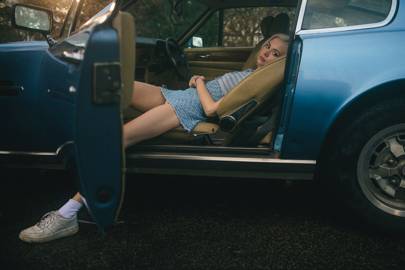 What is the quirkiest thing you’ve done in the name of wellness?

One time on tour, I was in the state of Oregon and it was in the middle of nowhere. It was a day off on tour. I was touring on the world’s tour bus. It wasn’t even a tour bus. It was a van with bunks in it and I was on it for three months. Amazing experience. But it was, yeah, it was tough. I do like my home comforts and my scented candles.

I decided I wanted to go to a spa and my manager was there and she was like, “Yeah, we need to go to a spa.” I just typed it in, don’t know where it was. I went to this really strange cult village. It’s like a cult community. The Ubers weren’t allowed to pick us up there. It was all very much off the grid… It was like someone’s back garden, which was odd. He just had plunge pools but it was all like salt water in the rocks. It was incredible. It was great but so odd. It’s like the kind of place you’d go on a dream and just be like, “That was a weird dream,”.

What is the best piece of advice you have ever received?

The best piece of advice I’ve ever been given is by my boyfriend, and it’s quite a funny one but I think I apply it to anything in life. So it is: “writing a song is a lot like doing a fart. If you have to force it, it’s probably sh*t.” And I think that I apply that to anything in life. If anything feels forced or unnatural or just not authentic you shouldn’t be doing it. Yeah, you just shouldn’t do it. Just do what feels natural to you. Be you and be authentic and that’s something I try and keep, because I think it’s easy to become inauthentic in the pop music world.

When do you feel truest to yourself?

I feel truest to myself when I come home at the end of the day and I take my makeup off. I put my hair up on top of my head, put my trackies on and sit down on the sofa and binge watch anything that’s on TV. That’s when I feel most calm. It would either be that or when I’m songwriting, because I feel like that’s something that’s always just felt natural.

What’s the song that is your instant mood booster?

Whenever I’m doubting myself or feeling low in confidence, or just having a bad day, I put on Bills, Bills, Bills by Destiny’s Childbecause it’s just an absolute banger. Anything by Destiny’s child I’ll put on, or TLC, No Scrubs. Just any ’90s R&B, ’00s R&B, I’m here for. It just makes me feel like a bad bitch. I’m ready to take over the world. 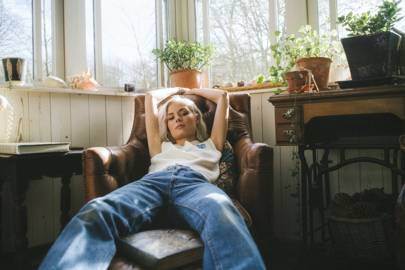 What is the song you love a good cry to?

Weirdly, this is quite a niche one. It’s a song called Me by The 1975. I was listening to it a lot when it came out and I just find it so relaxing. I always listen to it on planes, on loop when I’m sleeping, because there’s something about the music that’s just really, almost meditative. And I always cry on planes, so I now associate that song. The song’s really, really sad, to be fair so that might have something to do with that, but I just always get really emotional on planes. I don’t know what it is, if it’s the altitude or who knows. Probably just crying because can’t get on the internet.

When have you pushed yourself to use your voice the most?

I think I’ve pushed myself to use my voice the most when I see festival lineups that are 99% male artists. As great as those male artists are, I just think there’s so many great female artists every year without fail. I ticked Instagram and Twitter to do a little post, just to be like hello, there were lots of females out there. It’s just, I think there’s still quite an imbalance in the music industry in general and even with female producers.

I think it’s really good there’s so many female writers and producers coming through now and being encouraged to do that, because I think when I was a kid I never had that example. Taylor Swift was the first female artist that I got into that brought her own songs and owned her own narrative, as such.

What is your relationship mantra?

It is that ‘you never lose with love’. I had a deep think in the shower this morning about this, because I know obviously sometimes it feels horrendous when someone breaks your heart or you get dumped. But you’re still winning because either you’re with the person you’re supposed to be with, it’s all going great and you were winning, or things have gone sh*t and it will grab you. Your heart’s broken, whatever it is. You feel like sh*t, but you’re still winning because you’re not supposed to be with that person, and they’ve actually done your favour in the long run because you’re going to go and meet someone even better. I just think if someone’s not giving you what you deserve then let them go. Just move on and you’ll find that person.

How do you deal with the voice in your head?

I have a very evil voice sitting in my own head a lot of the time so I’ve had to learn to talk to that differently. I think one of the best pieces of advice that I heard was when you’re talking to yourself in a bad way, when you’re putting yourself down and doubting yourself, take yourself outside yourself for a minute and think would I speak to my friend like that? Or a family, or a stranger? Absolutely not. If you wouldn’t speak to a stranger like that why are you speaking to yourself in that way? No. And then just think about all the things that you’ve achieved throughout your life as well. I think you just got to try and flip it as soon as it comes in, but it is hard.

The Real Story of Tom Hayden and Jane Fonda’s Relationship

If You Always Feel Cold, You May Want to Talk to Your Doctor