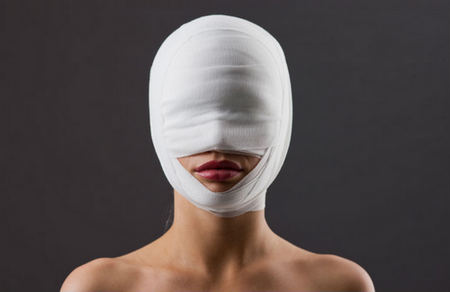 If any of your guilty pleasures involve combing social media for funny videos, you’ve likely seen the one of the little girl who burst into tears after her dad shaves off his beard. Hair will almost always grow back, but there’s a lot to be said about undergoing plastic surgery as a parent. While it should go without saying that a procedure shouldn’t completely alter your appearance, to the point above, even a slight change could be enough to send your child into a meltdown.

Exactly how you talk to your child about your plastic surgery plans can be tricky, especially given today’s conversations around body image and cultural ideals, but having the conversation is key. “Several of my patients have come in wanting to have plastic surgery, but they are nervous that their daughters may think that it’s necessary to change yourself to be beautiful,” says Melissa Doft, MD, a board certified plastic surgeon in NYC.

A woman’s desire to tweak her appearance often stems from something that they’ve been self-conscious about since childhood, so parents should be prepared for their daughters (of a certain age, of course) to have similar insecurities. “If you think that you can get a major facelift, for example, without sending your child the message that you approve of undergoing surgery for the sake of beauty or youthful appearance, then you are being unrealistic,” says Michael Swetye, MD, a San Francisco-based psychiatrist with board certifications in adult, adolescent, and child psychiatry.

Still, that doesn’t mean you need to forgo your plans to go under the knife (or needle) altogether. Just be ready to answer some tough questions, both internally and with your child. Dr. Swetye recommends that all parents considering plastic surgery, first talk with a clinician who works in child mental health, such as a child therapist or psychiatrist. “A clinician familiar with child development can guide you on how to speak with your child based on their stage of development, their personality, and your family dynamics,” he says.

“Most of my patients with children come in post-baby for either a breast augmentation, breast lift, breast reduction, liposuction, or abdominoplasty,” says Dr. Doft, adding that a small child will most likely not notice these changes in their mother’s body. So, in general, she doesn’t think parents need to explain to a young child (toddler or younger) their plans of plastic surgery – even if it’s a significant facial change like rhinoplasty or a facelift.

However, Dr. Swetye warns that children of any age may become upset by the visible physical injuries of surgery. “It may be hard for them to understand surgery when a person is not ill or ‘broken’,” he says. Dr. Swetye points to other concerns, including a parent’s absence while recovering and other impacts surgery may have on a family’s normal routine, and so he recommends children be informed of what to expect. To that point, Dr. Doft agrees: “They will wonder why mommy can’t lift, hold, or cuddle me.” She suggests moms recuperate away from home for a few days until they are physically comfortable enough to hold and interact with their child as usual.

Once the child is older, more in-depth conversations are necessary. “I have had many teenagers and 20-year-olds come to the office for a rhinoplasty. They often start the conversation with, ‘I have my mother/father’s nose, and then they explain that their mother also had a rhinoplasty,” says Dr. Doft. “Children may identify with the parent, thereafter wondering if their own body parts are inadequate or require change,” Dr. Swetye explains. You’ll need to be prepared to have a discussion with them about your personal values regarding issues like beauty, aging, and surgery, and give them the opportunity to express their thoughts and feelings without judgement. “Don’t assume or insist, but rather offer a curious and sympathetic ear to their expressions,” says Dr. Swetye.

What Dr. Swetye advises against is asking your older children, no matter how close you are, for their opinion on whether or not you need surgery, as it will put an unnecessary burden of responsibility on their shoulders. Once you’ve made a decision, inform your child and address his or her concerns and questions. “If their response changes your decision about surgery, that’s fine – it’s ok to be influenced by your child – but don’t go into the conversation fishing for their counsel,” says Dr. Swetye.

Finally, know that the conversation doesn’t stop with the first incision. Keep the convos going even once you’ve recovered. “After the surgery, if your children speak openly about your change, you shouldn’t shame them or shush them,” says Dr. Swetye. Doing so can lead to them feeling distrustful or developing a false reality. Instead, take ownership of the decision you’ve made and know that it may provoke various reactions from others. Openly discussing surgery with teenagers or young adults can eliminate many of the taboos or misconceptions around cosmetic procedures and help them form their own educated opinions on the subject should they want to consider it, adds Dr. Doft.

“If you are uncomfortable discussing your surgery with your child, you might ask yourself why,” says Dr. Swetye. This may help you to better understand your desire or rationale for surgery in the first place.

Zendaya and Jacob Elordi Met in the Most Hollywood of Ways