By the time the dust settles on Game of Thrones, a new king sits on the throne: Bran Stark, who is put on the throne by the votes of a council of lords and ladies rather than ruling by birthright or right of conquest.

Few fans probably expected Bran, who has become the Three-Eyed Raven and not entirely human in recent seasons, to sit on the throne. According to one fan theory, though, this might actually be the unexpected ending to the ASOIAF novels too.

When Game of Thrones finally came to an end after eight seasons, some of the characters’ endings had us scratching our heads. In many cases, it was certainly unexpected to see the endpoints of many beloved characters turn out to be totally different than many of the theories floating around. For fans disappointed with the finale, there’s always author George R.R. Martin’s A Song of Ice and Fire book series, which still has two installments to go and, most likely, will be different in some ways from the TV version. In one case, though, some fans suspect that one of the most surprising twists in the finale is actually going to line up with a major plot point in the final books.

Reddit user indianthane95 lays it all out, hinging on a comment author Martin once made about fan theories.

“So many readers were reading the books with so much attention that they were throwing up some theories, and while some of those theories were amusing bullsh*t and creative, some of the theories are right,” Martin said at a Q&A in 2014. “At least one or two readers had put together the extremely subtle and obscure clues that I’d planted in the books and came to the right solution.” 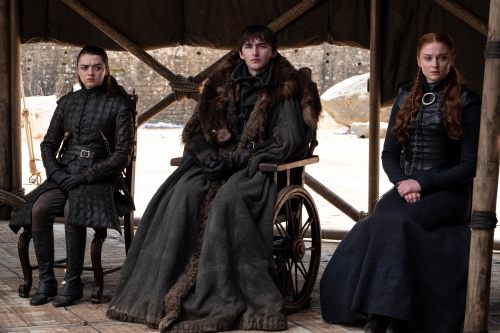 In all fairness, that could point to any number of theories – after all, to say there are a lot of theories out there would be a massive understatement. The Reddit thread continues to pull together evidence suggesting that the Bran-as-King twist is, specifically, the one that Martin was talking about. The theory goes that Bran is the series’s version of the Fisher King, a figure from English/Welsh mythology who is physically part of the land and thus not entirely human. Bran, as the Three-Eyed Raven, is similarly more than human, literally embodying the history of Westeros.

“This is the only type of monarchy GRRM gives legitimacy, the kind where the king suffers on his journey and is almost dehumanized for the sake of his people,” the Reddit theory claims, and it’s actually not that far off base. Martin has admitted before that real English history and mythology – most notably the Wars of the Roses – inspired ASOIAF, so it’s not implausible at all that his ending would draw on more elements of the same.

Of course, we don’t know what Martin has planned for his books, and he’s been infuriatingly (though understandably) vague when asked how much of the TV series lines up with the ending he intends to write. Until the final two installments arrive, we’ll just go back to theorizing – something fans have gotten used to over the years!