The school cafeteria served many things that one would never encounter in the states (natto spaghetti for example), but one thing they did serve that I couldn’t get enough of was seared ahi tuna, prepared fresh to order.

It was usually served with white rice, a little shoyu, some radish sprouts, a few slivers of nori, and some toasted sesame seeds. One ample serving may have cost as much as 200 yen (~$2) but I think it was probably less.

Seeing a recipe for seared ahi in the South Beach Diet Cookbook got me thinking again of this delicious fish, and I found some gorgeous steaks at Whole Foods. The South Beach recipe calls for the steaks to be seared with peppercorns.

I was looking for a more Asian twist, so I made up my own marinade with tamari, sesame oil and ginger.

Ahi tuna is also known as yellowfin tuna. To make seared ahi, you need to start with very fresh, sushi-grade ahi, as you will only be lightly searing the outside, leaving the inside raw. Not even rare, but raw. The freshness and the quality of the fish make a huge difference with this dish, so don’t even attempt it with a lower grade of fish. 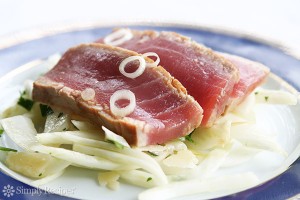 1 Mix the marinade ingredients together and coat the tuna steaks with the marinade, cover tightly, and refrigerate for at least an hour.

2 Heat a non-stick skillet over medium high to high heat. When the pan is hot, remove the tuna steaks from the marinade and sear them for a minute to a minute and a half on each side ( even a little longer if you want the tuna less rare than pictured.)

3 Remove from pan and slice into 1/4-inch thick slices. Sprinkle with a few green onion slices.

Can serve plain, with white rice, or over lettuce or thinly sliced cabbage or fennel. Shown served over sliced fennel salad. 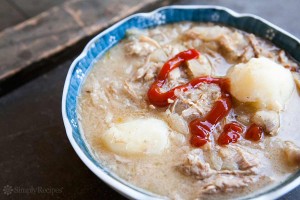