My first food memory is of sitting on a kitchen countertop watching Anna, the young German woman who came to our house to help with cleaning and tidying, pull a puffy pancake out of the oven.

It was the biggest pancake I had ever seen.

She slathered it with butter, sprinkled it with lemon, and doused it with a snowy shower of powdered sugar. I was fascinated.

The History of Dutch Baby Pancakes

I have since learned that Anna’s pancake has an American counterpart: the Dutch baby.

The legend goes that Manca’s Cafe in Seattle started serving it in the first half of the twentieth century. The owner’s daughter could not pronounce ‘Deutsch,’ the German word for German, and so the Dutch baby name was coined.

In 1966 the food columnist Craig Claiborne popularized the pancake by writing about it in The New Times. (You’ll have to visit the library archives to reach Claiborne’s original piece, but here’s Amanda Hesser’s more recent account.) 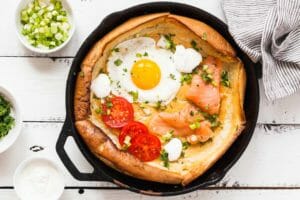 But enough history. Dutch baby pancakes are most often served as a sweet baked treat (with powdered sugar, berries or apples and jam), but there is no reason to limit it to that.

Since I love buckwheat crepes, I thought of trying a Dutch baby made with all buckwheat flour, but the flour is simply too dense to make the pancake puff. That experiment was a failure.

However, I found that adding just a touch of buckwheat along with the all-purpose flour in the batter produced an earthy quality that I loved. It pairs beautifully with smoked salmon and eggs.

If you have trouble finding buckwheat flour, the pancake is also delicious without it. Just replace the amount of buckwheat flour in the recipe with all-purpose or whole wheat flour.

How to Make a Dutch Baby Pancake

Heat the pan and the oven until very hot while you make the batter. Swirl the butter in the hot pan, pour in the batter, pop it into the oven and wait. Assemble the filling while the pancake bakes. By the way, whizzing the batter in a blender instead of whisking it helps to make thin, liquidy batter is smooth with no clumps of flour.

The Dutch baby usually has a dramatic puff when you first pull it from the oven, but it is ephemeral – it becomes, well, flat as a pancake after a minute or two. Don’t despair. Your creation is just as tasty without the puff.

I think this is a super meal for Sunday supper, but you be the judge. When would you like to eat it? 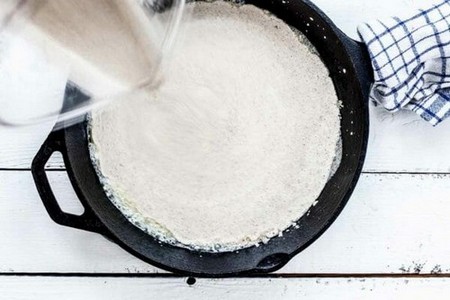 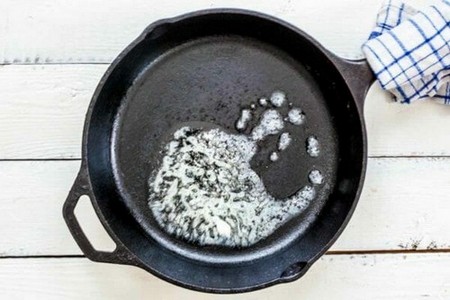 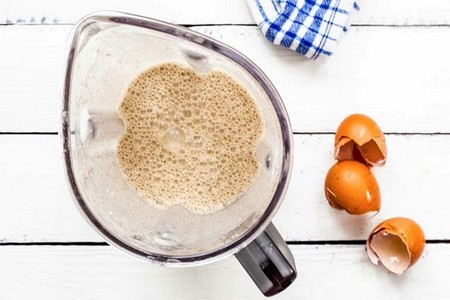 For the Dutch baby:

1 Adjust an oven rack to the center position and preheat the oven to 450ºF. Set a 10-inch ovenproof skillet (such as cast iron) in the oven to heat. Heat for 15 minutes or until very hot.

2 Make the batter: In a blender, blend the eggs, milk, 2 tablespoons of the melted butter, all-purpose flour, buckwheat flour and salt together until frothy and well mixed.

3 Bake the pancake: Swirl the remaining 2 tablespoons of melted butter in the hot skillet and pour in the batter. Bake for 18 to 20 minutes, or until puffed and golden.

4 Meanwhile, fry the eggs: In a skillet over low heat, melt the butter for the topping. Swirl the pan to coat the bottom. Break the eggs into the skillet, and cover the pan.

Cook for 2 minutes, or until all but a thin rim of egg white around each yolk is opaque. Remove the pan from the heat, keep covered, and let sit for about 30 seconds to finish cooking. Remove the cover and keep warm.

5 Serve the pancake: Slice the pancake into quarters and set each on a plate. Top each quarter with a fried egg, a slice of salmon, tomato slices, and a few dollops of sour cream. Sprinkle with parsley, scallions, and a few grinds of black pepper. 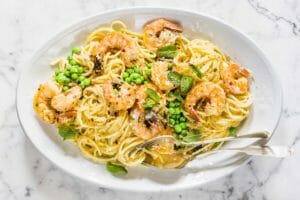 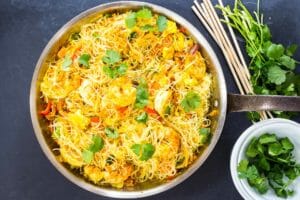