Sandra Bullock’s breezy home in Hollywood’s Sunset Strip is officially on the open market for $2.995 million after more than a year and a half on the rental market. The residence, which she first purchased for $1.485 million in early 2001, is located a stone’s throw from celebrity-favorite hotel and eatery Chateau Marmont, and is next door to a home owned by Cameron Diaz. Its four bedrooms and three bathrooms span 3,153 square feet, with all the amenities one might expect from an Oscar winner’s home, sans any of the pretension. The front door opens onto an atrium-like entrance with skylights and tons of tall, leafy greenery; the atrium then leads onto a spacious living room with high ceilings, an angled fireplace, and a built-in media wall that can be easily hidden behind sliding wall panels. Just beyond the living room, the kitchen offers a classic, clean look and feel with black granite countertops set against white cabinetry (a large, double-wide kitchen island dominates much of the space) and a number of additional skylights to bring the outdoors indoors. An eat-in kitchen space features a double-wide center island and a wall of glass doors on one side of the room that opens out onto a courtyard-style backyard with a swimming pool.

Elsewhere in the house, one of the bedrooms is currently being used as a gym; a beautiful spiral staircase leads up from the room to a lofted sleeping area that could easily be converted into a meditation space or the like. Another of the bedrooms was converted into a home office with built-in desks that line one of the walls. But it’s the master suite itself that really rounds out Bullock’s California classic home: It’s generously sized with a high vaulted ceiling and a dark accent wall behind the bed, giving it a sunlit, cavernous feel (the wood-trimmed windows and doors help as well). Two sets of glass doors open out onto the backyard, while the bathroom boasts a full-length chaise longue, a Japanese-style deep-soaking tub, and a separate steam shower. Out back, the home carries out its lush, tropical theme with greenery and bamboo dotting the premises around a flagstone-paved terrace, a swimming pool, and spa. Sandra Bullock still has plenty of real estate in her portfolio even when this stunning home sells: In Los Angeles, she currently maintains two noncontiguous high-floor condos at the Sierra Towers building in West Hollywood, as well as a Tudor mansion in Beverly Hills that she snapped up for $16.19 million in 2011. She also owns properties in New York City; New Orleans; Jackson Hole, Wyoming; and an oceanfront hideaway on Georgia’s Tybee Island. 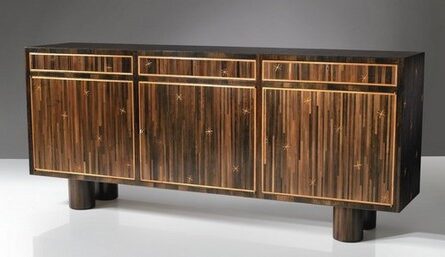