As I meet four of the show’s stars – that is infamously a product of Channing Tatum’s Magic Mike movies – Anthony Dodaio, Jake Brewer, Edson Juarez and Pip they are stripped of their onstage bravado and they are wearing actual clothes.

Going to see Magic Mike Live! should come with a thirst warning. You will leave not even parched but in fact, severely dehydrated. Whilst the show could be classed as a ‘stripping’ show it goes beyond that with body defying dance routines and in our complex world it’s a welcome form of escapism. All things considered the music is as pumping as the muscles and the female gaze is firmly in the spotlight – finally!

And sat in the gin bar, within The Hippodrome Casino – the home to Magic Mike Live! in London – the groups of women getting their pre drink ON ahead of the night’s show, acts as the backing track to the chat instead of, ‘ride it, my pony.’

After a recent report by the UK Mental Health Foundation found 28% of adult males admitted to feeling anxious because of their body image we
are here to talk about contentious issue of male body image and how these dancers deal with the idea – and indeed the ideal – of the ‘Magic Mike Body.’ As the audition call says, the show is looking for, “male dancers in their 20s to 30s. 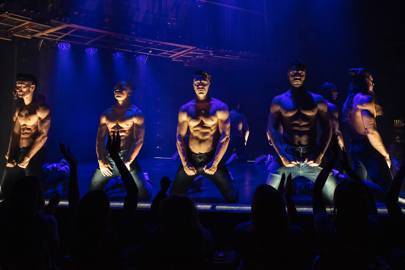 Athletic, fit, fun dancers. All ethnicities and body types are encouraged – it is NOT important and/or preferred that they are body builder types or especially muscular/built – please don’t worry about what you think is the ‘Magic Mike body.’ We are looking for something for everyone when putting together our casts.”

More than that the show isn’t reduced to the male body alone – as you may expect – with the candidates asked to step forward with, “special skills of any and all kinds are welcomed including (but not limited to) singing, drumming, piano, and guitar. Aerial and/or partnering skills are a huge plus. Dancers should be all be confident, likable, collaborative team players.”

Personally, as someone who has suffered with his fair share of body image issues, I wonder what it’s like for them to go out on stage every night with their bodies on show wearing, at times, very little. Do they think there is a stigma around men talking about body image issues? “Absolutely,” Jake Brewer, 26 from Bromley tells me instantly. “Men have issues with their body just as much as women do. We just don’t talk about it or share our experiences around it enough.

“I have had body image issues at different times of my life,” Pip 26 years old from Hastings confides, as I question whether they fall into the trappings of comparison culture online. “Yes, I do,” Pip says as the interview takes an unexpectedly emotional turn. “You can scroll through Instagram and see people with different or better bodies than you. That can play on your mind. It played on my mind more when I wasn’t working, and I was in between auditions.”

Filling the void of work with intense exercise is something the rest of the cast also confirm they were guilty of as they all cite times that they have all fallen into the trappings of body image issues and approached the gym in a negative, addictive way. With Pip stating it became almost, ‘obsessive – when you aren’t working as a dancer it’s hard. I was going up to two times a day at points because I felt like I wasn’t good enough or I was fighting with myself. Now I’m more body positive.”

You might assume the cast are working harder at the gym than ever before now they are starring centre stage every single night the opposite is actually the case for Jake. “I am working out far less now I am in the show – the most I really work out is during the warm-up for each show,” Jake says mentioning the 40-minute warm up they do before each show. “Doing the actual show. It’s hard work going out on stage, doing those routines up to twice a day at some points,” he concludes.

Whilst they all elude to falling into the trappings of compare and despair on social media, they don’t fall into the trappings of comparing themselves to their fellow cast mates. “We are all so different, my body is different to Pips and his is different to Edson’s for example,” Jake tells me. “I don’t compare myself to anyone else in the cast, we are so different especially in terms of dancing talent too. We all fulfil a different criteria and that is what makes the show special, there is something for everyone.” It’s all too clear the show has had a therapeutic effect on its stars and it’s empowering to hear those you would usually not except to be so open and honest around their body image issues.

Back to the topic of the show itself whilst it’s refreshing to see the male gaze construct reverted, with the female gaze at the forefront the cast don’t see the audience members practically dribbling over them as ‘objectification’ they see it as empowering. “I personally never feel objectified,” Pip says. “If anything, it’s been really empowering for me – the show has given me so much more confidence. We are performers, we are dancers from different backgrounds, and we love to perform so to have that reaction from the audience every night is really empowering.”

Jack concurs, “If anything the show has made me more confident and given me more faith in myself. Any hang-ups I had before about my body, or my skills have gone by doing this show.” Somewhat silent over the topic of confidence is Anthony Donadio a resident break-dancer in the show. Has he had any lapses in confidence? Cheekily smirking, his fellow dancers laugh and answer for him, “absolutely not!”

The show has equally had a positive impact on their relationship with brotherhood – which is so evident today – as the London show’s newest recruit, Edson Juarez who has just moved from Los Angeles to join Magic Mike shares. “Everyone has been so welcoming for me, the brotherhood is strong here,” the 28-year-old says. “We are a team and we are always helping each other out and stepping up when we need each other. You learn more by working together, everyone is very welcoming here.”

The friends I went to see Magic Mike Live! with – after picking their jaws off the floor – were astounded what the male body could do but also left with one question, do they have girlfriends? And saying, “I wouldn’t be able to let my boyfriend do that!” But in reality, as I find out, the show has had a positive impact on Jake’s relationship in particular. “Your partner has to have real trust in you, for you to do this job. If anything, it’s made our relationship more solid.”

One question remains, how do they navigate the post Me Too world we live in where we heavily police our own and other people’s actions? With audience members brought on stage every night, dancers treating attendees to lap dances whilst placing audience members hands all over them and even at some stages licking whipped cream off the attendee’s bodies, how do they negotiate the tricky tightrope of appropriate and inappropriate behaviour?

“It’s only ever done with complete respect in mind,” Jake says. “When we bring people from the audience on stage we ask if they are comfortable. Then we tell them we will talk them through the whole routine before-hand and if at any point they object to anything we stop. It’s a very safe space.”

Speaking of safe spaces with four strong, stereotypically masculine men openly speaking about their confidence and body image issues just goes to show what an empowering arena Magic Mike Live! is for its audience but crucially for its stars.

Struggling to Find Motivation to Work Out?

This Horrific Crash-Test Video Offers the Final Proof We Need