Case in point is her brand spankers new Airbrush Flawless Foundation, which was teased back in July, gathered a waiting list of 17,000 and launched officially today. For context, before landing on the final formula the foundation (which comes in 44 evenly distributed colours from light to dark) was meticulously blended, starting with the darker shades first.

“Most foundations start with the whiter pigment and then get stretched out to the deeper tones, but what you end up with is deep tones that appear ashy or chalky,” explained Tilbury. Next, it was tested across the faces of over 600 men and women, of all ages and all skin tones to ensure it reached the needs of real people, rather than masquerading as inclusive.

You have to hand it to Charlotte Tilbury, the woman is an unstoppable beauty juggernaut. And, after a lengthy stint in the trenches (where she’s spruced-up countless faces, A-listers included) she has the insider knowledge necessary to create products that really perform. Crucially, she’s made it her mission to take the magic she mixes up backstage for her high-profile clientele, bottle it and share it with the rest of us. All of us. No exceptions.

It follows then, that the campaign, much like the foundation, is just about as inclusive as you can get. “Everyone from 18-80 wants a foundation that stretches and blends with their natural skin tone and type,” Tilbury says of the collection, which is fronted by 86-year-old Dame Joan Collins, Charlotte’s own mother, Patsy, drag queen, Miss Fame, model Chey Maya Carty and blogger Em Ford who’s open account of her struggle with acne went viral, among others. The theme? Flawless is a Feeling. “It isn’t just about the way you look,” says Tilbury, who, as a makeup artist could be challenged with hypocrisy on this last point.

Yet if you look at the foundation, the campaign, the images on the website (which feature men and women of every age group and every skin tone), it feels clear that at every step of the way, the aim has been to give everyone a tool to help them feel more confident in their own skin, should they want it. 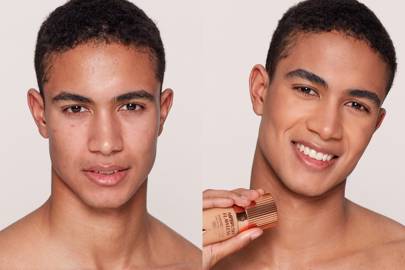 Sure, she’s flogging us a foundation (a very good one, at that), but this truly is a formula that’s been created for everyone, everywhere. While Charlotte’s open-door policy of showcasing older faces, Asian faces, gender-defying faces and all faces in between should be standard practice by now, this is one more celebratory step in the right direction.

Worth Raising Your Brows For?

After Beauty is the disruptive new beauty playground