However, it wasn’t always Alicia’s destiny to be dripping in Louis Vuitton with an Academy Award in hand. Until she was 19 years old the Swedish born actress’s destiny revolved around tutus and plies when a back injury put an end to her dream of being a ballet dancer.

When Alicia Vikander won her Oscar for Best Supporting Actress in 2016 for her heartbreaking portrayal of a wife – whose husband was one of the first to undergo gender reassignment – in The Danish Girl she was at the top of Hollywood.

Here in a rare, personal interview Alicia Vikander opens up in our latest edition of GLAMOUR UNFILTERED, hosted by Josh Smith as she releases her latest film – the new Netflix thriller – Earthquake Bird which aptly is about the physical and personal earthquakes in life. Here she discusses the earthquake moment in her own life – leaving ballet behind – why she is proud she had an “inner compass,” as the start of her acting career and how speaking up and owning her own voice in sex scenes, in the “moment when you were afraid,” empowered her….

Earthquake Bird is about physical earthquakes but also the earthquakes in people’s lives. What has been something that’s happened to you that’s really shaped you as a person?

Oh, wow. Probably a lot of things. I think a big thing would be quitting ballet. I was 18/19 years old and I started dancing when I was three. I got into the Royal Swedish Ballet School when I was nine. I went to school six days a week and trained for between five and seven hours a day for nine years. That becomes part of you and you kind of grow up with it and it’s hard.

I don’t even know when I decided to become a dancer because it’s part of those years when it’s most natural. Then one day I started to wonder if it was, ‘the thing,’ and to realise that at that age, around 19, there’s so much other things you’re trying to work out, too. I remember when I had to go to my coach and tell them that I maybe think I’m not going to dance. These people had invested actually nine years of their life to get me to go and do this. That was a very, of course, pivotal point in my life. It was kind of the revert of stepping away from something. But it really did affect me a lot.

How did leaving ballet behind shape you?

I think it shaped me in that I dared to listen because it was hard. I was kind of on this set path with my obligations or ideas of my own and the guilt that I had of even telling my parents. It’s a bit like Lucy when at the end of the film she has a moment when she shares her guilt and realises that other people can share their experience by doing that. It gets easier.

I think that’s what I had done. I had created this horrific moment of letting people down. It was, of course, my life and my decision. But it didn’t feel like that. Knowing that when it actually happened and when I dared to speak up, people said, ‘It’s okay, it’s fine,’ was such a relief.

It’s such a brave thing to use your voice when you are scared to. In your career, is there a time when you’ve really trusted your inner voice and you’ve spoken up?

I heard about just now, that there’s special coaches that have been introduced for intimate scenes in films. That is one thing I was like, ‘Great, I haven’t had one of those on set, but that sounds good!’ Especially when you’re in the beginning of your career and you feel like you want to please in the sense that you want to do your work right. Thank God I think I had a bit of an inner compass because those things are so tricky to film. 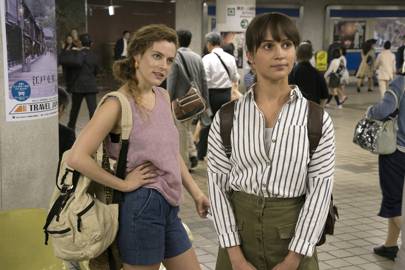 Its kind of became a thing in the beginning that I tried to do one take each and that means that everyone is aware of what’s going on, it’s all choreographed, and it’s done. That was, of course, tricky in the beginning to feel like, ‘I should have (used my voice) but it was a moment when you were afraid. Can I actually raise my voice now?’

You’ve got some serious skills in Earthquake Bird – you’re chatting Japanese, paying the cello – it’s all going on. How tricky was that for you?

I’m a professional pretender! I wish that I could say that I learned Japanese in three months – it’ll come one day – but no. Being bilingual, I knew it was going to be a lot of work. cause you can’t really just mimic a recording. You need to know what you’re saying. It was definitely a challenge. I thank my makeup artist, who’s both English and Japanese speaking. She had to listen to me every morning run every single line. She was like, ‘Babe- can you do it at home?’

Lucy is such a complex character psychologically. What did it teach you about yourself?

One thing I definitely learnt is that the film is about how can you get past traumatic experiences or sections in your life when you want to move on. And she maybe has an idea of reinventing herself. The question in the end is, do you have to do that, or do you just need to be able to get to know your true self? And let that one be.

What has your journey with discovering your true self and your self-identity been like for you?

I think it was also transition for me. I was thinking about that, working in another language and about Lucy moving to Japan. When I started to work, I did my first few films in Swedish and then one in Danish, actually. Then I, about eight, nine years ago, came here (to London) and did my first English-speaking film and I was getting to know myself in a new culture and a new language and my English wasn’t that good. 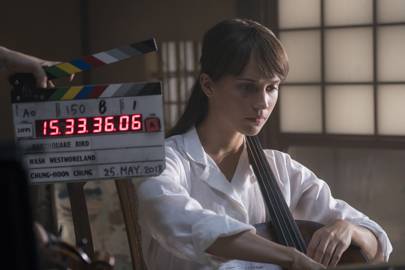 But in the beginning, people who especially don’t speak two languages, they were like, ‘Oh it’s great.’ It’s like, ‘No, because I think about what I say all the time. Which means that I turn out to be super quiet or I look very serious because in here so much is going on.’ That was kind of a reinventing yourself, trying to find yourself in a new culture and language.

What was being an outsider like for you – was it quite a difficult thing to come to terms with?

Thank God, I’ve always been a very social animal. That’s always been my way. I came here and I thankfully met a lot of good friends. But I think it was more about when you meet people for the first time, especially in a work environment. I definitely think that getting to go out there, meet new people and make friends helped a lot.

Did playing Lucy in Earthquake Bird represent a bit of therapy for you?

You’re always terrified on the first day of a shoot because you’ve been sitting at home with all these fantasies and ideas. And then I’m going to have to show them to people and you hope it’s going to work. You can have moments in acting when you get to act out things that of course there’s just moral and social rules out there that makes us not be able to act out certain kind of emotions or things all the time. Cause that would be weird – Alicia couldn’t act like that. But then to get to do it can be quite liberating. Even though it’s not you, you understand why someone could end up feeling, doing this or saying this.

Your dad was a psychiatrist. Did that make you more introspective?

The cool thing is a lot of people, when you have a dad who does that, go ‘so how was that growing up? And did he analyze you?’ And I thought no, but then I realised later on how he’s just so good at letting other people talk and he’s such a good listener. And when it came to Earthquake Bird and this script, he read it – my parents always read my things – and it led to a lot of interesting conversations, for sure. He also did come to set in Japan. I was shooting in the subway and suddenly I had two people from the crew say, ‘oh, there’s this guy, I think he’s one of the producers who’ve flown over. I sat chatting with him for three hours. I told him my life!’ And I was like, ‘Oh, that’s my dad!’ So, he’s good at it. Even when we went to a karaoke nightclub, he ended up chatting with the DJ up in the DJ booth. He came to me, he was like, ‘Oh my God!’

Earthquake Bird raises the idea of pretense vs. reality. You aren’t on social media publicly is that one of the reasons why you aren’t?

It’s more become other people’s question, ‘What is the reason why you haven’t gone on social media?’ But it was actually a simple case of I didn’t really feel like I knew why I would do it. If I ever feel like doing it, I understand it’s an amazing way to communicate. But the side effect, which is kind of a good one, is people who I can’t follow, I’m easily fooled when I go and watch their work.

So are 78% of us, and this woman is on a mission to make things better