Obviously, if you don’t want to be in a group chat, it would be best to maturely tell the other people in the group and leave, right? Sure, but that’s so much easier said than done.

It can feel really intimidating to basically reject other people’s attempts at connecting with you, potentially hurt their feelings, and possibly come across as “difficult.” Especially when, as I mentioned, the urge to please people is basically coded in my DNA.

A few months ago, I realised that I, an adult human, didn’t know how to leave a group chat. I’m a recovering people pleaser – someone who would rather sacrifice her own comfort than make the people she loves uncomfortable – so it’s no surprise that I found myself in a group chat I eventually wanted to leave. More specifically, I was in a “positivity” group chat with people I respect (and fear a little).

At first glance, a chat dedicated to brightening bad days might sound enticing, like a meditation break you can take just by glancing at your phone. But it spiralled quickly into people giving me well-intentioned but unsolicited advice about my productivity, which ultimately gave me an overwhelming sense of dread every time someone pinged me from the chat.

It took me weeks to even realise that I wanted out. Then, even though the relentless daily chatting was making me anxious, it took me a few more weeks to realise that I had the power to change my own circumstances. Once I caught myself devoting my therapy sessions to ranting about this chat, I knew it was time to take responsibility for my own happiness (or unhappiness) with the group chat. Also, ranting about this wasn’t a good use of my therapy copayment. 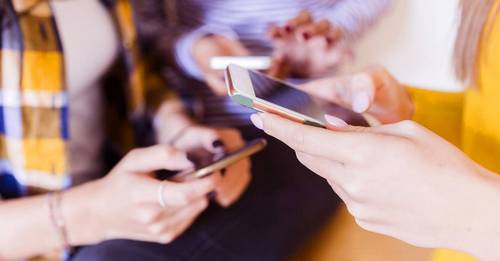 I totally understand that this is a pretty niche problem. Not everyone has a difficult time working up the courage to get out of a group chat, no matter who may be on the other side of the screen. But if you’re reading this, you might be similarly nervous about disappointing people and need a little guidance in this situation. So, for the sake of your emotional wellness (and your poor cellphone battery), here’s why I truly recommend distancing yourself from a group chat that’s overstayed its welcome in your messages – plus how to do it.

There are some clear signs it may be time to leave a group chat.

If you, like me, find yourself frustrated or even anxious about your group texts, it might be an indication that you should consider if it’s adding enough to your life for you to stay. This can be difficult because, often, it starts innocently: A friend or family member wants to disseminate information quickly, so they bring random people into one conversation.

De’Jonnae B., 27, says that she’s currently locked in a group chat with all of her family members between the ages of 25 and 36. It was initially created to brainstorm ways that the family could address their finances and pool resources.

“This group chat is now just everyone sending warnings about human trafficking … and them trying to get me to buy streaming services,” De’Jonnae says. “I don’t want it.” After a family member suggested she open an HBO NOW account for the entire group, she stopped responding altogether.

Even though I’m currently grifting HBO GO from a family member, De’Jonnae’s story sounds familiar. Many of the group chats I regularly find myself in are born with the best intentions. Someone shares details about a plan, someone responds to the original texter, and another person chimes in. Suddenly, what was initially a birthday party planning conversation becomes an active space where memes, gossip, and random societal commentary fly back and forth. Depending on the people and messages involved, this can be utterly delightful – or not so much.

You can try muting the group chat, though that can have mixed results.

It’s totally reasonable to try to set boundaries by tinkering with your phone’s privacy and notification settings. Muting a text conversation means you won’t get incessant sounds and pop-up notifications every time someone in your group chat has a thought. But this isn’t foolproof.

“I still see notifications. All 1,000 of them,” De’Jonnae says of the red circle on her messaging app that reports how many texts she’s racked up.

For me, muting my group conversation just spurred more conversation. If I stopped responding, I was usually met with a phone call to inquire about my absence. Muting resolved my battery issues, but it added more social complications than I wanted to deal with. Plus, I love the people who were trying to keep me positive and productive, so I didn’t want to outright disregard their advice or disappoint them. The path of least resistance was, for a while, responding to every inspirational quote and questionable wellness suggestion.

Maybe all of this angst directed at something I could resolve with a conversation sounds silly, but it really can be hard to inform people you genuinely like that you no longer want to be in a 24-hour group conversation with them.

You could also try telling people in the group chat why you don’t love it before deciding to leave.
For instance, if you’re in a running group chat that comes with a side of inexcusable body shaming, you might speak up to refocus the squad.

In my experience, however, people speaking up when they hate a group chat is rare (probably because it can be hard and awkward to do). Sometimes, instead of communicating frustration, members of a group chat just split off into splinter chats with a smaller number of members to discuss whatever’s happening in the main conversation.

I did want to give this more assertive strategy a try, though. With the help of my therapist (who was possibly tired of hearing about this chat), I found a way to express my needs to the group. I suggested that my chat buddies ask before offering advice or that they frame opinions using “I” language instead of “you” language. My goal was to keep the conversation going in a way that felt more comfortable for me.

One of the participants in the group chat balked at my request, but still. It’s entirely possible that you’ll have better results if you try to bring up your issues with the chat instead of just leaving.

Finally fed up? Here are the logistics of how to leave a group chat.

To recap: Yup, I could have just said I didn’t want to be in the chat as soon as I realised as much. Instead, I wasted weeks of my life, ruminated over this in therapy, and pitched this article to my bosses. When I got tired of inaction, I actually ghosted the group chat. I just stopped responding, and I was lucky enough that the chat went dormant. I started other conversations with the members of the chat I wanted to keep talking to and pretended the whole awkward ordeal never happened. This wasn’t the most graceful approach, but it worked out in my favour. I sleep well at night.

If you want to take a more proactive approach, you can try to remove yourself from the group chat. The exact way you do this will depend on your phone and even how many people are in the chat, so you might need to experiment. For instance, one of my colleagues tested out how to leave a group chat on her iPhone, first trying to get out of a chat that had two other people (both also with iPhones). She clicked the collage of her friends’ photos at the top of the chat, hit “info,” then scrolled down to the “Leave this conversation” option only to find it grayed out and unclickable. When she tried the same thing in a group chat with three other people, still all with iPhones, “Leave this conversation” was in red text she could actually click. It did alert the others that she’d peaced TF out, which can open a whole other can of worms.

Even with that in mind, you might be ready to exit stage left. Sometimes technology can foil those plans, though. According to De’Jonnae, who estimates that there are around 10 people in her group chat, leaving her group isn’t technologically possible. “When there’s a mix of iPhones and Androids, you can’t formally leave,” she explains. “You can mute and delete, but anytime someone in that group text sends a message, you are re-added.”

Translation: It really can be best (and sometimes necessary) to just tell people you want out. When Tiani K., 30, found herself in a group chat against her will, she was very clear (and mature) about her need to leave. “They were mostly friends of a friend … I was pretty blunt about it,” Tiani says, explaining that she simply asked them to remove her. “I didn’t beat around the bush.”

I’m currently in eight other group chats that bring varying degrees of pleasure into my life. In the same way that you’d invite someone to a party (rather than just thrusting them into a crowded room), it can be really great to ask before you add your loved ones into a group chat, depending on the circumstances. But, if you’re like me, learning how to say no those invites might become an entirely different challenge.