Roast chicken, fennel, and orange come together in this makes a bright, flavorful one-pot skillet dinner. Serve it with rice, farro, or barley for an easy meal.

Although this chicken with fennel and orange is great any time of the year, it’s especially welcoming toward the end of winter when you’re looking for something lighter to offset the heavier, stick-to-your-ribs dishes we tend to feast on during the colder months.

The fennel and orange slices add brightness to the chicken thighs, which are themselves rubbed with garlic and herbs. However, before we go any further, let’s address the elephant in the room – not everyone is a fan of fennel’s flavors of licorice and anise.

Yes, licorice can be overwhelming at times, but the taste of fresh fennel isn’t nearly as strong and unpalatable as in the dark candies you used to get from your grandma. Instead, it’s bright and refreshing, especially when you’ve been eating loads of heavy foods in winter and early spring. 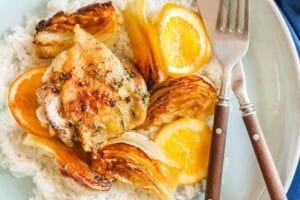 Confession: I used to be in your camp, too, but was converted during my time as a line cook. We had a peppered fennel compote on the menu that was part of a cheese plate, and tasting it time after time as I prepared the compote led me to realize that fennel’s flavor wasn’t as big and scary as I initially thought. Soon enough I found myself eating raw scraps of the vegetable while making my way through the day’s prep list.

For those that aren’t quite ready for raw fennel salads yet, roasting the fennel softens the anise flavor. The fennel also becomes nicely caramelized in the pan, which adds some extra sweetness to further balance out the licorice taste. 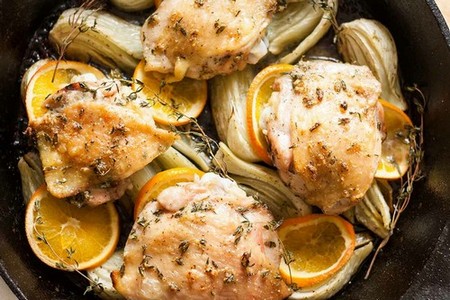 And don’t worry about the orange peel making your dish bitter. As the orange slices cook, the harshness of the pith mellows and the citrus of the fruit shines through.

The result is a wonderful interplay between the garlic and herbs with the chicken, the slightly sweet licorice flavor from the roasted fennel, and contrasting acidity from the oranges.

This dish goes great with rice or a heartier grain, such as farro or barley. And be sure to spoon some of those pan juices over top!

What to Serve on the Side

Remove any excess moisture from the chicken by patting it dry with paper towel and add the chicken thighs. Toss to coat evenly, using your hands to massage the garlic-thyme mixture into the chicken.

Set aside to marinate for 5 to 10 minutes. while you prep the vegetables. You can also do this step a few hours ahead of time and refrigerate to infuse with more flavor.

2 Prepare the fennel and put in skillet: Trim the stalks to just get the bulb; remove the outermost layers (which tend to be dry and scuffed up). Cut each bulb into 8 wedges. Toss the fennel wedges with 1 tablespoon olive oil, 1 teaspoon salt, and 1/4 teaspoon black pepper.

Evenly layer the fennel wedges in a large cast iron skillet or baking dish. Top with the orange slices. 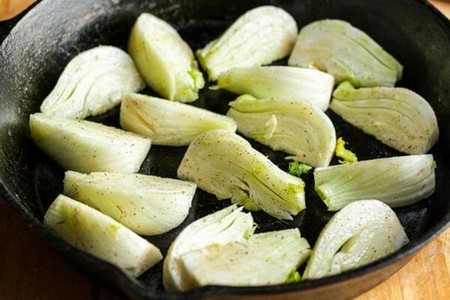 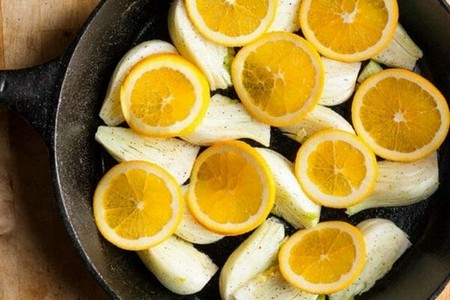 3 Bake the chicken: Place the chicken on top of the fennel and orange slices. Scatter the thyme sprigs around, if using. Place in the oven and bake until the chicken is golden and the juices run clear when pierced and the chicken is at least 165°F in the thickest part, 35 to 45 minutes.

Serve the fennel, on or two orange slices, and chicken over rice (or another grain) and spoon any pan juices over top. 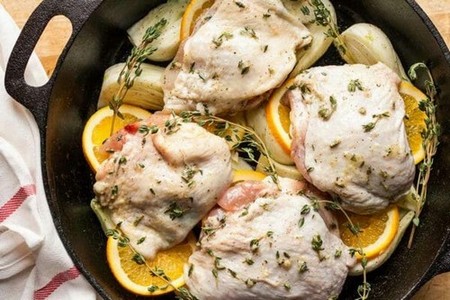 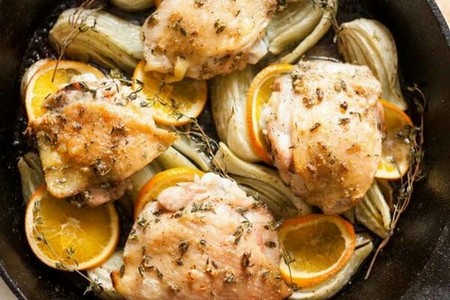