As a relatively young millennial, The Brit Awards, the British popular music awards, has never been of particularly significance for me.

Artists you may have heard once or twice on the radio win awards, spend their acceptance speeches thanking their parents and their record label and pepper their speeches with awkward very British comic attempts to make jokes which don’t always land.

While Black Britons have gone on slowly to be represented on that stage, it was this week’s electric performances by musicians Dave and Stormzy that really resonated as for me it represented what it means to be black and British today but even more than that, like many other black British people, it was a key moment because we felt seen.

Stormzy moved through Grime, gospel, Afrobeat, Dancehall in 10 minutes showing the transnationalism that underlies black British culture, because whilst our nation tries to shut its doors off to the rest of the world, through restrictive immigration laws and shutting our doors to the EU, it is impossible for black Britons to do so because simply by being black and British we are connected to elsewhere. 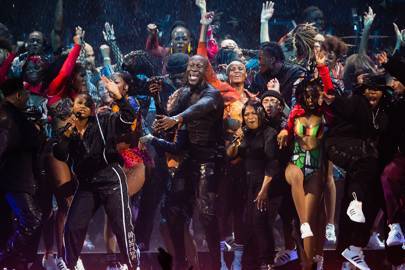 Dave articulated this particularly well through his punchy and thought-provoking performance of ’Black’ (from the from the album Psychodrama – won album of the year) Though this song is already popular within the black British community outside of us, relatively few people have heard it in comparison to his more popular songs like ‘Thiago Silva’ which went viral when he performed it at Glastonbury.

Whilst many have focussed on Dave’s performance by highlighting that he switched up the final verse of the song to call our prime minister, who has advocated the return of white British rule in Africa because black people are incapable of ruling themselves and recently hired a person who believes that black people are genetically inferior to white people, a racist, the other lyrics within the song are just as significant. He takes us through black British identity today, where newspapers like the Daily Mail and the Sun have a negative reputation in the black community, posting articles about crime so that the:

“blacker the killer, the sweeter the news. And if he’s white, you’ll give him a chance, he’s ill and confused”

Where we face such inequality of outcome that black British becomes “workin’ twice as hard as the people you know you’re better than,” and where being black and British today inevitably means that we are descendants of subjects of the British Empire, where our ancestors spent “time on plantations” and we today represent countries like Ghana and Nigeria which didn’t exist while our “grandmother was living”- pointing to the immediacy of the recent history of Empire in a country where our media elite often profess that it ended years ago.

Proclaiming black British identity loudly like this, and the beauty of our culture alongside the inequalities we still face, firmly put our identity on the world stage at a time when blackness, as Dave says, is just equated with being “African-American.” Because black British identity is often erased, this can often lead to dangerous tropes being spread about black British people- like Spike Lee’s Netflix series She’s Gotta Have It where, in one episode, the lead character, Nola, suggested that black British people have no awareness of racism and that we have “developed Stockholm syndrome, and fell in love with our captors.”

With these performances by Dave and Stormzy, there is a renewed hope and feeling of excitement amongst many black British people that our perspectives and our ideas can push forward and break the glass ceiling, that people will finally start paying attention to what we have to say. After all, it’s undeniable that black British people have been making waves and helping redefine British culture for decades.

Within the 21st century we have seen the likes of Reni Eddo-Lodge, Emma Dabiri and Bernadine Evaristo firmly proclaim black British womanhood through literature, we have seen footballers like Raheem Sterling and Alex Iwobi and athletes like Nicola Adams, Katarina Johnson-Thompson and Dina Asher-Smith firmly cement black British people’s sporting prowess and we have seen actors like John Boyega and artists and film directors like Steve McQueen, who currently has an exhibit depicting different aspects of black identity at the Tate Modern.

If anything the performance at the Brits on Tuesday night pushed forward the message even clearer that black British people are here, we’re not going away and just wait until you see what we’re bringing into the next decade.

However, it is important to note, that whilst many black British people celebrated the expressions of our culture and concerns on stage on Tuesday night, certain demographics sought to diminish it. According to spiked-online, Dave being upset about racism in this country means that he’s a “woke,” “Guardianista” who only calls out racism because it’s now popular to do so. Dave, in other words, is, what some who lean to the right derisively call “stunning and brave.”

Whilst it is true that there are some excesses within left-wing politics, the fight against British anti-black racism is something that unites many black British people on all sides of the political spectrum. Sadly, there is such a huge gulf between what frustrated black British people are actually saying and what we’re continually being smeared with.

Stormzy, Dave and so many of us are tired of being told to not talk about racism, to be grateful that we’re here, to only call out the most obvious, n-word shouting “real racism” and repeat sycophantically over and over again that Britain is the “most tolerant country” in Europe. It is worth noting those who claim that Britain is the least racist country in Europe rely on a study by European Commission survey which relies upon extremely small sample sizes (roughly 1,000 people in Britain were surveyed), and does not tell us the ethnicity nor the location in the UK of the people answering questions like “would you care of your child was in a love relationship with a black person?” However, even if these stats were 100% accurate to quote Dave’s eloquent statement at The Brits- “the least racist is still racist.”

Pointing out the race issues in other countries whilst ignoring our own is like standing outside to stare at your neighbour’s house on fire whilst yours is burning down too. Ignoring issues leads to more chaos and disruption, not equality and justice. That’s why it’s so important that Dave in particular not only highlighted what it means to be black British on Tuesday night but exposed many of the very real problems our community still face in the U.K. too. Him pointing out that the Grenfell victims “still need accommodation” and that we “still need support for the Windrush generation” was particularly powerful.

Black Britishness was projected all across the world on Tuesday night, in all of its pain and glory, and, despite the wishes of some we’re not going away and getting quieter, we’re surviving and thriving and building legacies. We are doing and are going to do so many things that our ancestors in the British plantations and the colonies could only dream of.