Nearly half of over-50s are now living with two or more serious health problems – a leap of more than 10 per cent in a decade.

Britain is facing a ‘tidal wave’ of ill health with an estimated 15 million patients living with several long-term health conditions such as diabetes, heart disease, and depression, according to a new report.

The warning comes just weeks after Cambridge University researchers found that one in four Britons were living with several health complaints. 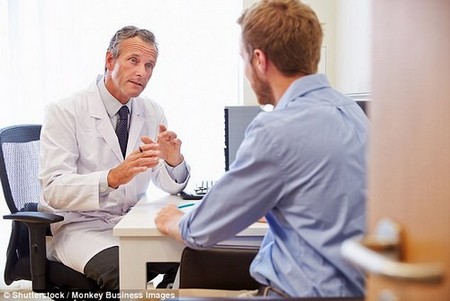 Experts now warn the problem is hitting younger generations with doctors seeing rising cases of people in their 20s and 30s.

Experts say diabetes and illnesses caused by sedentary lifestyles are rising in young people, which is increasing the total amount of the population who are living with more than one serious long-term health condition

While many of the illnesses are fuelled by obesity and sedentary lifestyles, the researchers suggested unproven factors like pollution could also be to blame.

Professor Stephen MacMahon, who led the report by the Academy of Medical Sciences, said these patients often received poorer care and were dying prematurely.

‘We are facing a tidal wave of patients living with multiple long-term health conditions, and our report demonstrates how little we know about how to manage this,’ he said.

‘Outcomes appear to be worse in these patients and yet there is growing evidence that people with multi-morbidity are less likely to receive appropriate care for the individual diseases they have.

‘We face a situation where those in greatest need are least likely to receive appropriate care.’

He suggested that the NHS was predominantly geared towards specialties, rather than treating patients’ conditions as a whole.

‘For too long we’ve focused almost exclusively on the management of single diseases, such as cancer and HIV,’ he added.

‘This means we have neglected the reality that most people with any one long-term disease typically have others.’

What did the report find?

Soaring levels of type 2 diabetes is one of the leading causes with those under the age of 65 typically having three other conditions, rising to seven in over-65s.

What is type 2 diabetes?

Melanie Davies, Professor of Diabetes Medicine at the University of Leicester, said the national picture had changed dramatically in the last decade with far more younger people being diagnosed with the disease.

‘We have children in our diabetes clinic with type 2 diabetes which we wouldn’t have seen even ten years ago,’ she said.

‘Perhaps ten years ago when I was doing the clinic there might be a handful of people diagnosed in their 20s now I have hundreds – if not thousands – of people who are in their 20s and 30s with type 2.’

Heaping strain on the NHS

The growing trend is heaping strain on the NHS, now accounting for the majority of GP appointments and hospital admissions.

It found patients with several serious conditions typically received worse care for each than if they had one.

Many are on a cocktail of drugs, with more than one in ten on four or more medications, putting them at greater risk of side effects including falls.

The health professionals said primary care was key to improving patients’ quality of life but suggested it was unrealistic for GPs to deliver it within ten-minute consultations.

Dr Lynne Corner, director of engagement at the Newcastle University Institute for Ageing and Faculty of Medical Sciences, said being a patient can be a ‘full time job’, with patients often having appointments with different teams and in different clinics.

She suggested more ‘one-stop’ shop clinics, were needed, such as one in Newcastle where one patient is seen by seen by multiple specialists on the same day at the same centre.

Patients suffering from both physical and mental health conditions are at particular risk of poor care, according to the report.

Professor MacMahon said more research is needed into how the NHS can restructure to better deal with patients with several severe illnesses, adding: ‘It really is urgent. It is not straightforward for the NHS to say ‘this is how we should restructure.’

‘Almost certainly restructure is required, but we just don’t quite know at the moment how to do that.’

Professor Helen Stokes-Lampard, Chair of the Royal College of GPs, said: ‘It’s testament to the NHS that more of our patients are now living longer, but with an ageing population also comes more complex, chronic illnesses, and GPs are certainly seeing more of this every day on the front line.

‘As our patients live longer, they will inevitably do so with multiple, long-term conditions, and it’s important steps are taken to address the issues highlighted in this report sooner rather than later.’

A spokesman for NHS England said: ‘Today’s report is further evidence that England’s NHS is right to continue driving integration in care, which is already delivering results across the country, including preventing strokes through better monitoring of high-risk patients by GPs and pharmacists, and integrated mental and physical health care for people with diabetes and other long-term physical conditions.’

These must-see Netflix dramas are actually based on true stories