She continued: “I mean I could be out here and throw a ball by myself and I’d feel good, but the thing that’s making me feel this high of cloud 9 is seeing people who believe in my cause and think it’s something worth donating to, something worth investing in.”

To say Rihanna has a lot going on would be an understatement. Not only is she running her Fenty Beauty empire and recently launched Fenty fashion house, she also just put on yet another trailblazing Savage x Fenty show at New York Fashion Week.

Oh, she’s busy churning out her ninth studio album and hosting events like the fifth annual Diamond Ball, too. No big deal. Last night, the musician and mogul hosted the fifth annual gala benefiting her Clara Lionel Foundation, which supports education, health, and emergency response programs around the world.

But despite her crazy schedule, Rihanna seemed super calm and radiated bliss on the red carpet. The 31-year-old star stunned in a black Givenchy Haute Couture mermaid gown, red lipstick, loose updo, and pearl earrings. Not only did she look amazing, she also spoke about how genuinely happy she is right now. “I mean I’m really happy right now,” the star told PEOPLE. “The thing that’s making me the happiest tonight is seeing the amount of support, the magnitude of support is really special.”

Rihanna also hinted at other things she’s working on (aka music!) and hopes to finish soon. It’s been almost four years since she dropped her last album, and fans have been eager for more music from the Barbados native while she’s pursued other ventures. But Rihanna promised that she’s working hard to release her ninth album, which media outlets speculate will drop in December. 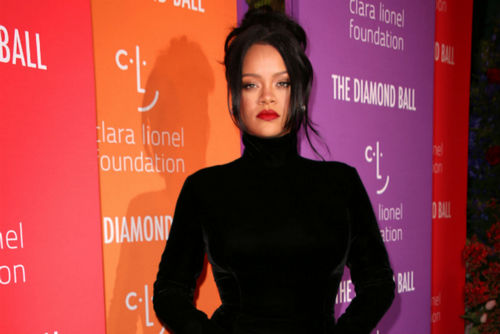 When Entertainment Tonight asked if she would perform at the upcoming Super Bowl LIV Halftime Show, she replied in typical Bad Gal fashion: “I still got an album to finish. You gonna ask me about Super Bowl? My fans about to have my neck.” (It’s also been rumored that J.Lo will be headlining this year’s Super Bowl.)

Despite her anxious fans, Rihanna knows that quality work takes time. “Whatever I do is gonna be confident whether it’s the album, perfume, lingerie, makeup, or fashion,” she said. “Y’all gonna have to wait. Navy, I’m so sorry.”

We’re on the edge of our seats to what she puts out next.