Couldn’t have happened to a nicer guy. 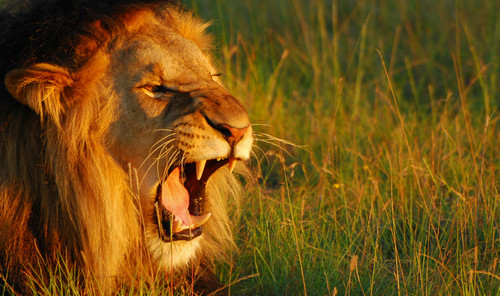 A suspected rhinoceros poacher was met with an especially brutal death at a South African game reserve.

Authorities said a man was hunting a rhino with four accomplices in Kruger National Park when he was reportedly killed by elephants and then eaten by lions. A skull and a pair of pants were the only remains discovered by a search team.

«Indications found at the scene suggested that a pride of lions had devoured the remains,» the park service said.

The man’s family was initially notified of his gruesome fate by those who were with him when he died. All four accomplices are in custody and awaiting a court date. Two had rifles and large-caliber ammunition in their possession when they were arrested.

“Entering Kruger National Park illegally and on foot is not wise, it holds many dangers, and this incident is evidence of that,’’ park managing executive Glenn Phillips said in a statement. ‘

“It is very sad to see the daughters of the deceased mourning the loss of their father, and worse still, only being able to recover very little of his remains.”

USA Today reports that illegal poaching is a major problem in Kruger National Park, as the price of rhino horns fetch $27,000 per pound, or $1,700 per ounce – $400 more than the price of gold. They are treasured as medicinal ingredients and symbols of wealth in some Asian countries.

While the sad truth is some are forced into poaching by crappy economic circumstances, people showed little sympathy for dead poacher on Twitter: