While EOTHO officially ended in August, the good news is that many restaurants are continuing similar discounts of their own accord to keep us fed and watered.

We recommend tipping at restaurants if you can, as the idea is to help businesses recover from the impact of lockdown on their trade and subsequently, their staff’s livelihoods, but for now, here’s a round-up of the restaurants participating and the deals that they’re offering.

One of the best-loved pizzeria chains in the city, there are currently four branches open for business – Shoreditch, City, White City and Marylebone. Famous for their 20-inch pizzas, Homeslice are extending the original scheme, so you can enjoy 50% off up to £10 per person Monday to Wednesday.

In July, when the government’s Eat Out To Help Out scheme was first announced, some of us were leaping with joy, while others were a bit unsure. Fast forward to now, when the scheme (which saw foodies getting a 50 per cent discount off meals up to the value of £10) has ended – we’re mourning its loss. It’s a well-known fact that the British population love a good bargain, and with a tenner off at many restaurants on our must-visit lists, we warmed up to the initiative pretty quickly. 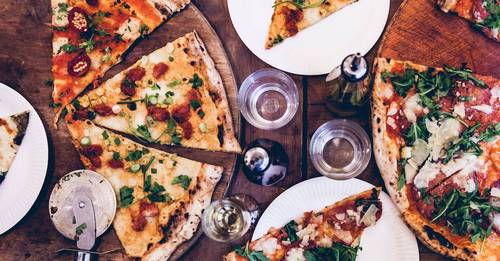 With its show-stopping views of the city and the Thames, Sky Garden’s Darwin Brasserie on level 36 has been one of our favourite date night spots for a while. Now, the restaurant is extending EOTHO throughout September, with diners receiving up to £10 off per person Tuesdays Wednesdays. Its Fenchurch branch is offering the same discount on lunch and dinner on Fridays and Saturdays throughout September.

This cult-favourite Indian restaurant group is offering 50% off food and soft drinks on Mondays, but in even better news – they’re taking off the £10 cap and are making the offer available until the end of the year. With restaurants in Soho, White City and Brixton, you can even take your pick of location.

This vegan fast-food joint, which hails from LA, is keeping the government scheme’s deal, with the same discount, conditions and days. That means you can get your hands on a plant-based burger, taco or portion of ‘mac n cheese’ for half price on Mon-Wed.

Based in Waterloo, this South-East Asian eatery is offering 50% off food and soft drinks up to the value of £10 from Monday to Wednesday. That means that their drool-worthy miso glazed black cod is just £14, while their nine course tasting menu is available for £29.50 instead of the usual £39.50.

Over its three locations in Shoreditch, Croydon and Wembley, participating traders in Box Park are offering punters 20% off dine-in meals up to the value of £10 between Monday and Wednesday. They’re also offering 20% off soft drinks to quench our thirst, as well as some alcoholic beverages, including draught pints, wine and slushes.

The popular tapas chain, with restaurants dotted across several areas of London, is offering the original EOTHO deal throughout September, as long as you book directly through them and quote ‘Keep Eating Out’. We’d recommend trying their infamous croquettes, though, to be honest, everything looks delicious.

One of the best stops for bao buns, Flesh Buns is offering 50% off food up to £10 per person through September, and they’re even adding an extra day. Enjoy deliciously discounted bao buns, sushi or poké from Monday to Thursday.

Craving a hearty bowl of pasta? Good news, both branches of Emilia’s Crafted Pasta in Aldgate and St.Katherine’s Docks are offering 50% discount off pasta dishes only (up to £10 per person) on Monday and Tuesdays in September. That means you can get your hands on freshly-made rigatoni with tomato sauce and chopped basil for just £4.25, or four-hour slow cooked béchamel bolognese for £6.25.

One of London’s most popular spots for tapas, Brindisa now has branches in five locations across the city. Each one is extending the government’s discount throughout September from Monday to Thursday, on the condition that diners quote “Comemos” (Spanish for ‘we eat’) when booking.

Housed inside the five-star luxury hotel The Langham, The Wigmore aims to take the feel of a Great British Pub and amplify the food to new heights. During September, you can experience it for 50% off (up to £10) on Tuesdays and Wednesdays.

One of Bloomsbury’s most instagrammable restaurants, Dalloway Terrace and its beautiful flower-filled dining area is back – and continuing the discount. Order a main course on Monday, Tuesday or Wednesday and you’ll receive 50% off your bill, up to the value of £10 per person.

If it’s refined Japanese dining you’re after, head to Hot Stone in Chapel Market. They’re offering 50% off their food and soft drinks bill (up to £10 pp) over lunch and dinner on Tuesdays and Wednesdays in September.

In Southwark, you can find delicious Israeli-inspired food for cheaper at Bala Baya. They’re extending the original Eat Out To Help Out deal and offering 50% off from Monday-Wednesday.

For steak, it has to be Heliot in The Hippodrome Casino. The restaurant, located in Leicester Square, is extending the original EOTHO deal with a cap of £10, but they’re also extending it to run on Sunday’s too.

Since 1998, family-owned Applebee’s has been serving Londoners delicious fresh seafood. In September, their Borough Market branch is extending the Eat Out To Help Out deal, but only on Mondays and Tuesdays. Make sure you pick the right day to snap up a bargain.

From a little pizzeria in Brixton market to one of London’s best-known pizza joints with branches all over the city, Franco Manca has come a long way. In excellent news, it’s extending the EOTHO deal throughout September on Monday – Wednesday, so you can pick up a margherita pizza for just £3.40.

Rather than following the EOTHO scheme, Burger Lobster has dropped its prices for September. With discount already applied, you can tuck into a whole lobster for just £20, or sample the restaurant’s infamous lobster roll for the same price.

This Latin American restaurant in Kensington is a dream for foodies. They’re extending the Eat Out To Help Out deal throughout September, with 50% off food and non-alcoholic drinks up to the value of £10pp.

The Shoreditch barbeque restaurant are offering a new deal in September: you can now get 4-for-15 (essentially, a starter, signature meat/bun, side and gelato for £15) from Monday to Wednesday, during either lunch hours or dinner.