Who was John Thomas Laver? My grandfather John Thomas Laver stood five feet four inches tall, just like his father, like my father and now me. But at five years of age when I wasn’t yet that height, he scared me.

He was a quiet, private man who, as they say, kept himself to himself. One morning, I found him seated alone at a table in an old wooden shed attached to the kitchen, having his breakfast, drinking tea. In hindsight, the tea part wasn’t unusual. He was born in England.

But it was how he was drinking it that I remember thinking was odd. He poured if rom his cup into his saucer and then drank it from the saucer – like a cat lapping milk from its dish. When I stared at him, deep in his own thoughts, he looked up at me only for a second, said nothing, and continued to sip his tea.

Every Christmas, six siblings and their families would gather for dinner at one of my grandparents’ homes in Orillia, Ontario. I never understood why they had two houses, but I remember that these occasions were fun. Lots of presents, lots of food, and for the adults, of course, lots of booze – which helped to keep whatever liquor stores were called in the late 1940s profitable. 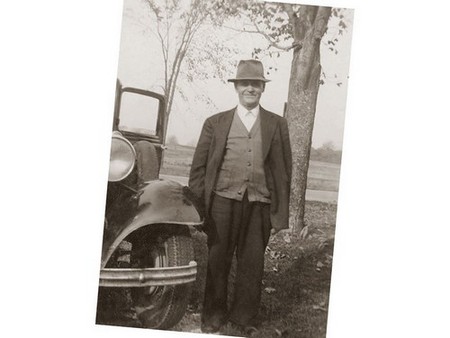 After everyone had packed away the turkey, unlike the family in the Dylan Thomas work, A Child’s Christmas in Wales, none of the men had a nap. Instead, everyone gathered around the piano, where my Aunt Joyce played carols and other seasonal tunes while we all sang along. It was a joy-filled time.

At precisely 9 p.m., however, my grandfather got up from his chair, wound the old grandfather clock that his father had brought from England in the late 1880s, and without a word left the carollers to their party and went to bed. Again, he confirmed my childhood opinion that this was an unusual man; a strange, unfriendly, remote man. A man to be avoided; and that was what I did. I don’t recall having any other interactions with him: no conversations, no bedtime stories, nothing.

But when my grandfather died suddenly from a heart attack in February 1954, my father, sitting with us at breakfast the day after his dad’s death, suddenly did something I had never seen before. He burst into tears, but only briefly, because like his pop, he kept himself to himself. From then on and for the rest of his life, my father from time to time would sing the tender lyrics from the old 1950s Eddie Fisher hit, Oh! My Papa. Obviously, I had missed something.

I suppose that was my grandfather’s fault, as he was in his 60s and I was only five.  But after seeing my father’s short, but immensely sorrowful, reaction to his death, and hearing him sing about his papa for the next 34 years until his own death in 1988, it was clear that in not knowing my grandfather, I was the big loser.

Ironically, I not only share his first and last names – he was called John, everyone knew him as Thomas – but at 75, I now look just like him.

The Sneaky Way Thieves Can Break into Hotel Safes

Traveling as a Queer Woman Is Terrifying, but That’s Not All It Is