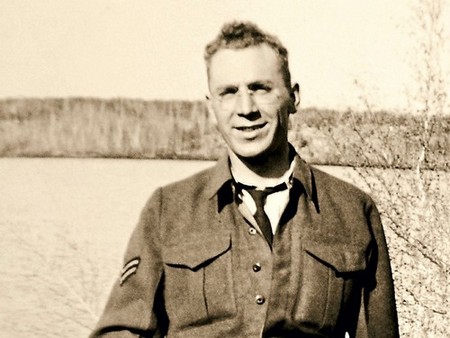 Hubert Arthur Joseph Landry was born in 1922 in Lamoureux, Alta. He joined the Royal Canadian Air Force on September 16, 1941 at age 19. He wanted to be a pilot but his eyesight was not sharp enough. “We’ll make you an airframe mechanic,” he was told. A morale-boosting duty in that role was stencilling insignia on aircraft upon their return from a mission:

“Below the pilot’s window, you painted a little bomb, then another one and another one (after every sortie). One crew left on their 26th trip; we never saw them again. Seven young men. That was one of my really bad memories… You felt like crying.”

For more profiles by Veterans Voices of Canada, click here.

This letter from a Canadian soldier explains the sacrifice of veterans everywhere.

This incredible Maldives resort taught me the power of real relaxation