Move over, polar bear – a new Jean Royère record holder has arrived. Though lauded for his cushy “Ours Polaire” seating (which regularly pulls in six figures at auction), the prolific French designer has a diverse body of work.

And buyers are starting to covet pieces beyond those for which he is best known. Case in point: A star-dappled Royère cabinet fetched a staggering $1.8 million yesterday at Sotheby’s Important Design sale in New York, six times its low estimate. Rendered in straw marquetry with an oak interior, the “Étoile” sideboard was commissioned in 1958 for the prominent Dumont family.

Sotheby’s offered a six-piece suite of Royère furniture from the Dumont residence, including a polar bear sofa and set of chairs in white alpaca wool, high and low Étoile tables, and a set of six dining chairs. Surprisingly, the usual frontrunners didn’t take the record price – the sofa sold for $429,000 while the chairs went for $795,000. In total, Important Design returned $13.7 million, the house’s second-highest total for a various-owner design sale.

This concludes a successful week for Sotheby’s design, which began with the first dedicated Thomas Molesworth sale in more than 20 years. A series of lively bidding wars pushed 75 percent of the 65 lots over their high estimates and resulted in the top ten highest prices ever achieved for Molesworth furniture. 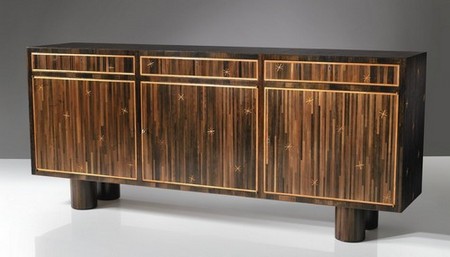 An exceptional Octagonal Games table covered in green leather led the bunch, raking in $225,000 against a high estimate of $70,000. All that to say, we expect to see some new Western-style country houses soon.

Following the Molesworth sale was the collection of Delphine and Reed Krakoff, which brought in $8.7 Million. It’s no surprise that the Krakoffs’ enviable collection of pieces by Les Lalannes was a hit on the block; François-Xavier’s iconic Moutons de Laine – five white and one black – fetched $2.3 million, almost double their high estimate. The rare black sheep alone netted $735,000, a new record for a single mouton.

Claude Lalanne’s Crocodile armchair achieved $735,000, while her Aux Branchettes chandelier sold for $399,000. Even as Sotheby’s design season wraps up, we know the Lalannes’ moon shows no sign of waning. In Praise of a $6 IKEA Storage + 4 More Clever Finds