Recommending e-cigarettes for smokers to help them give up the notoriously bad habit is ‘irresponsible’, an expert today argued.

Professor Kenneth Johnson, from the School of Epidemiology and Public Health at University of Ottawa, said the devices can have the opposite effect.

The gadgets have been subject to huge controversy recently, due to worrying links between heart and lung damage and vaping.

Nearly three million people in Britain use e-cigarettes, which doctors are advised to tell patients are better than smoking traditional fags.

But Professor Johnson argued against the decision in a powerful article in the British Medical Journal today. 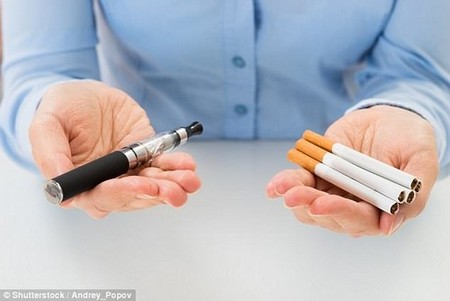 A means to an end, or just another addictive replacement for cigarettes? Experts are divided on whether vaping is an effective tool to help smokers quit

He wrote: ‘They tobacco companies have a long history of aggressively using their economic and political power to profit at the expense of public health.

‘British American Tobacco has big plans for expanding the recreational nicotine market with e-cigarettes – and cessation is not part of the game plan.’

It comes after the health watchdog declared doctors should tell patients that e-cigarettes pose less harm than smoking.

Nice released its guidance last month in an attempt to stem the spiralling confusion over the safety of the trendy gadgets.

But in the same breath, the body added evidence on the long-term health impact of vaping is not yet fully understood.

What is an e-cigarette and how is it different from smoking?

An electronic cigarette (e-cigarette) is a device that allows users to inhale nicotine by heating a vapour from a solution that contain nicotine, propylene and flavourings.

E-cigarettes do not produce tar or carbon monoxide, but the vapour does contain some harmful chemicals.

Nicotine is the highly addictive chemical which makes it difficult for smokers to quit.

It is thought that e-cigarettes carry a much lesser risk than cigarettes, but as they are still fairly new there is not yet a conclusive picture of their safety.

E-cigarettes do not contain the dozens of cancer-causing toxins in tobacco, but do contain dangerous chemicals such as formaldehyde, as well as nicotine.

Studies have linked these toxins to bronchitis and stillbirths in pregnant women. Other trials have shown the toxic flavourings can cause cancer.

Professor Johnson pointed to a 2016 study that found teenagers who use e-cigs are 12 times more likely to try real tobacco products.

His comments sparked a bitter row among the medical community, with two experts claiming e-cigarettes can help smokers quit.

They argued the risk of smoking from e-cigs must be low because the devices have become more common and smoking has fallen to record lows.

The pair pointed to evidence that shows many smokers choose e-cigs over nicotine replacement therapy because of their success rates.

Professor Aveyard and Ms Arnott also said ‘for most vapers, the uncertainty around harms is largely irrelevant because vaping will be short term’.

They wrote: ‘In the UK, e-cigs are part of a comprehensive anti-smoking strategy that protects public policy from the commercial interests of the tobacco industry.’

And they argued ‘evidence suggests e-cigarettes are not benefiting the tobacco industry because the rate of people smoking is falling’.

Loneliness epidemic sweeps the US