Luann de Lesseps needs a break from paradise – or more specifically, from the Hamptons. The former countess and reality television star recently put her newly renovated Sag Harbor home on the market, with the hopes of selling it for $6.25 million, or at a minimum renting it for $150,000 a month starting in August. She recently announced via Instagram that she is moving upstate. The post mentioned peace, serenity, and mountains, but nothing about missing the crazy dinner parties and drama in the Hamptons that were captured on the Bravo reality show.

The 2,500-square-foot home, which Architectural Digest partially featured in November 2017, recently underwent a yearlong renovation; it now has all of its four bedrooms, four bathrooms, and other rooms looking up-to-date. Her kitchen, in particular, has undergone a major update in keeping with her belief that buffet-style dinner parties are optimal (“I love people moving around; I hate to seat people,” she told AD last fall). A large Restoration Hardware dining room table is, therefore, situated right by the kitchen counters so that guests can be right in the middle of the cooking action without being in the way. Other renovations include an added bedroom suite, a new roof, cedar siding, and a dormer for her daughter Victoria’s bedroom. The home also features three fireplaces and French doors leading from the main living spaces out onto an outdoor deck.

“I bought the house four years ago now. I found it through a girlfriend of mine who is a broker,” she also told AD. “A couple of margaritas later, we go to the house. It was early fall, and I walk onto the property and say: ‘Oh, my god, this is exactly what I’ve been looking for.’” The former whaling captain’s house, which sits on nearly a third of an acre by the waterside, will also come with a boat for the lucky buyers or renters to use. “I wanted to conserve the home and improve it at the same time,” she said of the home upgrades. “When I found the house, it was a blank, white canvas ready to be painted. So I painted it with my life.” 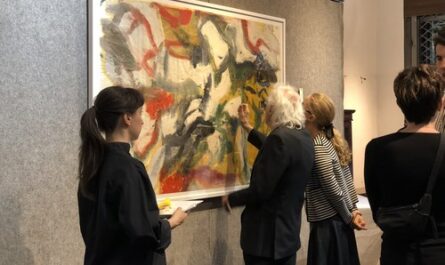 How Did Six Willem de Kooning Paintings End Up Forgotten in a Storage Unit?