As statistics currently stand, eight million tonnes of plastic is predicted to be making its way into our oceans each year. A trend, which if continued, will mean we’ll have more plastic in our oceans than fish by 2050, according to the United Nations.

Indeed, there’s so much plastic in the sea already, we can see it from space.

There’s no denying it, we have a serious problem with plastic. And the beauty industry – glamorous and feel-good while it may be – is a major contributor. Last year it was reported that 120 billion units of packaging are produced every year by the global cosmetics industry, bulked out by the use of complex lids, multi-layered boxes and cellophane, much of which is superfluous, non-recyclable and ends up in our landfills and in our oceans.

Over 633 marine species are now known to be impacted by the plastic problem, say the Environmental Investigation Agency. Sea animals like dolphins, whales and seals are ingesting astonishing amounts of toxic microplastics which increase their chances of disease and mortality and affect reproduction, while larger plastics are responsible for choking our sea life.

New research from the ARC Centre of Excellence for Coral Reef Studies has shown that it’s affecting corals tangled in plastic, too, which are 90% more likely to get a disease causing them to die. And, it’s having unexpected repercussions on our male fish population. A UK professor found that chemicals – including plastic – making its way into our rivers are changing the fish’s gender, with some demonstrating “feminised traits” such as reduced sperm quality and less aggressive behaviour, making them less likely to breed successfully. Some are even producing eggs.

It’s an issue that’s making its way back round the food chain. Anchovies have been found to consume microplastics (which smell to them like food), they’re being eaten by bigger fish, which are then consumed by us, meaning we’re polluting our oceans as well as our own bodies.

It’s clear more needs to be done to stem the issue. So what are the main offenders? Alongside plastic packaging, cotton buds and wet wipes are among the worst. A 2017 investigation by Water UK found that wet wipes – which commonly contain polypropylene, a plastic which won’t decompose – made up more than 90% of the material causing sewer blockages. And river cleaning teams in London discovered that the hundreds of thousands of wipes that were flushed down the loo actually created a new river bed in the Thames – a phenomenon found increasingly in rivers around the world. With Brits using an estimated 1,102,822,000 wet wipes and 2 billion plastic-stemmed cotton buds a year, it’s clear it’s an enormous issue to overcome.

But, there’s a sea change in motion. The Attenborough Affect – spurred by national treasure David Attenborough’s efforts to inform the nation – has led to a 53% decrease in single-use plastic from consumers, 82% of whom now consider products with sustainable packaging more important than ever, according to a recent study from GlobalWebIndex.

So what needs to be done? For a start we need to turn our consternation into actual action. Despite the rising number of those wanting to tackle the problem, only 50% of Brits are recycling their bathroom waste (as opposed to the 90% of kitchen waste recycled) simply because it’s inconvenient. Every step we take independently to educate ourselves and make smart choices makes a huge difference cumulatively.

For widespread change however, political action is vital. The government made huge strides in banning microbeads last year and this year, environment secretary, Michael Gove, announced a similar ban on cotton buds, to be implemented next year. “These items are often used for just a few minutes, but take hundreds of years to break down,” he said of the decision.

It may not sound significant, but without government intervention, there’s nothing to force brands and consumers to break established habits and replace them with new, sustainable alternatives. But there’s still more to do. “We’re calling on the UK government to set new legally-binding targets to radically reduce single use plastic production in the forthcoming environment bill, and to establish an independent watchdog to enforce these targets,” says Fiona Nicholls, Plastic Campaigner for Greenpeace.

Big corporations need to be implementing change, too. So many encouraging steps have already been made. “The beauty industry were the first to react to the public backlash to unwanted microbeads in beauty products, and many brands voluntarily phased them out before the UK Government ban came into force,” says Nicholls.

“Now the industry has an even greater opportunity to reduce their plastic footprint by introducing refillable/reusable packaging alternatives, or ‘going naked’ with their products as some brands have chosen to do.” Recycling alone, while a step in the right direction, simply isn’t enough.

“It has become very clear that we can’t recycle out of this mess: we simply don’t have the facilities in the UK and countries like Malaysia are starting to send our recycled plastics back as they just can’t cope with it all.” Instead, brands looking to reuse the resources we already have are making all the difference.

The Body Shop are axing their face wipes (they’ll stop selling them from October) after no longer being able to justify the waste and environmental impact. And, they’re using their products to clean up the planet by collecting used plastic which might have otherwise ended up polluting our rivers, lakes and oceans and reusing it. This year, they’ve purchased 250 tonnes of plastic from waste pickers in Bengaluru, which equates to 12.5 million recycled bottles. And customers can return their empties in store as part of the brands Return, Repeat, Recycle program.

Lush has saved an estimated 1.8 million plastic bottles after making its switch to naked packaging.

The ideal alternative to disposable wipes, Face Halo’s genius face cloths gives a more thorough cleanse and can be reused up to 500 times.

If ever there were a beauty brand committed to the ocean, it’s One Ocean Beauty. In fact saving the waves is woven into their DNA. The ingredients themselves are made from lab grown marine ingredients like algae to avoid harvesting limited resources, while the packaging is made from recycled wood and is made of 100% recyclable bioplastic.

UpCircle create its body and face scrubs by repurposing Arabica coffee grounds from London cafes which would otherwise be binned.

Created by Unilever with the specific aim to do things more sustainably, Love Beauty Planet’s bottles are made from 100% recycled plastic and are 100% recyclable to make use of the vast amounts of existing plastic and nix the need for any more to be created.

Ren are cleaning up the beaches by using reclaimed ocean plastic wherever possible to keep as much out of the environment and in the recycling loop. They’ve made the switch to biodegradable films on their gift boxes and use recycled zips on their gift bags.

BYBI has made sustainable packaging its mission from the start and make use of glass wherever they can (a material that’s infinitely more sustainable). In fact, they are introducing a revolutionary new system in which you can send back your skin booster bottles with a freepost envelope in order for it to be sterilised and reused again to close the loop on more materials being produced. The brand has also invested in biodegradable plastic bottles which can be chemically decomposed into nothing at composting plants.

Known for its impressive roster of top beauty brands, Selfridges has committed to ensuring that at least 50% of its products are better for people and the planet by 2022 and will be running workshops in its famous London beauty hall for the next six weeks on everything from reducing bathroom waste to discovering refillable and reusable products. 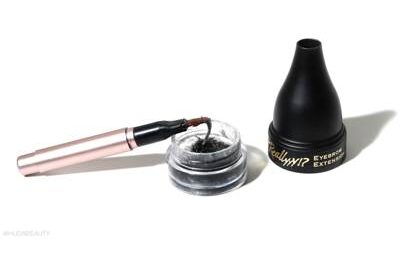