Meghan has helped create a capsule collection for the charity, which provides unemployed women with stylish, high-quality interview clothes and training to get them back into work.

Meghan Markle just appeared in her first Instagram story as a royal! The official @SussexRoyal account last night uploaded pictures of the Duchess of Sussex working behind the scenes on a shoot for Smart Works, a UK charity for which she is a patron.

The shots show Meghan assisting behind the camera and we’re seriously digging her workwear uniform. The Duchess wore a pair of Aquazzura nude pumps teamed with a gorgeous £85 blue-and-white striped linen shirt by British brand With Nothing Underneath.

The label was founded by ex-Tatler jewellery editor Pip Durell in 2017 when she struggled to find the perfect easy-going classic boyfriend-style shirt so decided to create her own.

Of course, the royal effect has meant that the shirts have been flying out the door today no doubt helped by the fact that a scorcher of a bank holiday weekend is on the cards. While Durell was aware of the Duchess had made an online purchase, she had no idea if and when Meghan would wear it. 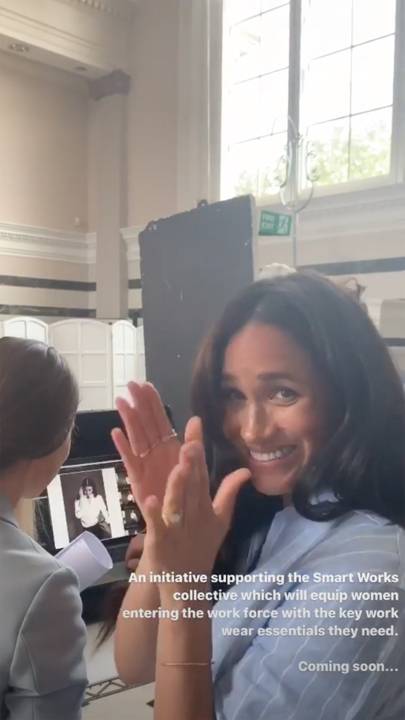 The brand shared on its Instagram page today: “So incredibly honoured that The Duchess of Sussex chose to wear her WNU linen yesterday in London for a day with the incredible @smartworkscharity. Endlessly effortless and elegant, we are blown away ?”

In fact, Markle’s appearance on the shoot was a surprise for everyone, even those working for the charity, who were reportedly thrilled by her arrival on set.

Meghan’s project was unveiled in the September issue of British Vogue which she guest edited. The royal outlined that she is collaborating with brands including Marks Spencer, John Lewis, Jigsaw, and Misha Nonoo for the collection, with the pieces selling on a “one-for-one” basis, which will see an item donated for each item purchased. The Duchess wrote, “Not only does this allow us to be part of each other’s story, it reminds us we are in it together.”