Kim’s 2018 Met Gala look took us back to 2009 when she was all about eyeliner and dark eye makeup. Are we about to see a return of the ‘more is more’ Kim we know and love?

Kim attends the KKWxMario dinner wearing this electric blue shade from the collection.

Returning to her natural style with long black waves.

Kim takes a jump to the pink side and absolutely nails it.

Kim Kardashian’s hair just keeps getting lighter and lighter, but the almost-white shade really looks cool on her. Kim has also given up her super long extensions for this lob look – very edgy.

After months of rocking sleek black glossy tresses, Kim has mixed it up a little by dabbling with grey dye. She showed off her new look at the SS18 Tom Ford show.

Another day, another sleek style. This makeup look is one of her boldest lately, too. Loving the slightly smoky eyes.

At a Balmain event, Kim opted for one of her go-to styles: straight ‘n’ sleek. We would pay good money to discover how she gets that shine.

At the launch for her KKW beauty products, Kim looked incredible. She wore her long tresses in waves and swept them to the side subtly. Nailed it.

After months of wearing her hair in an ultra sleek style, Kim opted for a more relaxed, tousled wave at an event recently.

We’re loving how understated Kim is keeping her hair at the moment. With a middle parting, sleek straight style and simple cut, we’re loving the simplicity.

Recently, Kim has been rocking a super shiny ‘do at lob-length. It makes her locks look insanely healthy. Jealous, us? Maybe…

Ok – we’ve never seen hair this shiny before. How on earth does Kim achieve it? One thing’s for sure, she wins glossiest locks in our eyes.

We adore Kim’s loose mermaid-esque waves which she was spotted rocking while out and about. 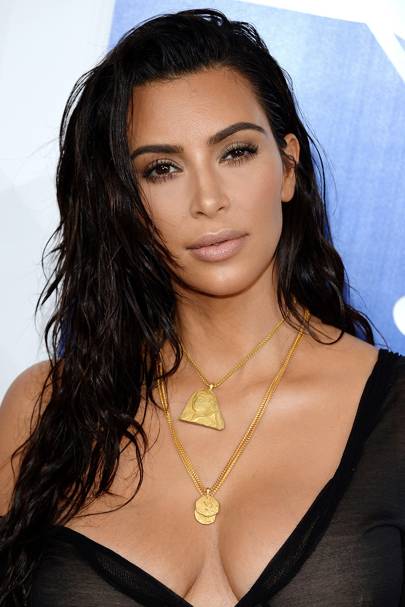 Kim went back to blonde for the Famous exhibition. We wonder if she’ll ever make the permanent change!

We love Kim’s take of plaits. Multi braids are in!

Kim’s been wearing her hair up a lot recently. Here she is rocking a super high topknot style.

Kim looked absolutely gorgeous at the Vogue Festival over the weekend. We are loving her slightly shorter hair and large lashes.

Kim was at the 2016 Webby Awards (where she won an award for breaking the internet) sporting one of her most natural beauty looks yet. She left her false lashes and extensions at home, this time opting for nude lips and a simple sleek hairstyle.

In keeping with the technology-inspired theme, Kim went all futuristic on us at the 2016 Met Gala. She slicked back her hair and wore large lashes and matte lips.

Kim made an appearance at Hakkasan, Las Vegas in April 2016, and sported a centre parting and chic makeup.

Kim Kardashian-West took time off from Snapchat to show off her new hair. The Keeping Up With The Kardashians star showed off her new ombré locks, created by her hairstylist Cesar Ramirez. We reckon this could be Kim’s chicest look yet.

Kim donned an ice-blonde wig at Kanye’s fashion show in February 2016. We wonder if she’s thinking about dying her hair again?

Just like her sisters, Kim is a fan of chic braids. The star recently opted for two glossy double plaits.

A simple sleek updo is Kim’s fail-safe hair look. She likes to pair this kind of ‘do with nude lips and gold eye makeup.

We love this sassy slicked-back hair and vampy lip look – and just check out that neckwear!

March 2015
How to overshadow everyone at Paris Fashion Week? Dye your hair peroxide blonde and unveil your new ‘do on the Balmain front row.

October 2014
Big lashes and a fleck of gold on the lower lash line was the order of the day for the Charlotte Tilbury Make-Up launch in LA.

June 2014
Kim’s not afraid to mix it up in the hair department and just weeks after marrying a certain Kanye West, the TV star worked an ornate dress with a severe, slicked-down and centre-parted ponytail with typically statement lashes.

May 2014
Just days before tying the knot with Kanye West at the Fort di Belvedere in Florence, Kim stepped out in this loose and elegant, slightly swept back style.

December 2014
After giving birth to her first child, daughter North, in the summer, Kim debuted a brand new post-pregnancy hair style. It was shorter, more natural and, oh yeah, blonde!

April 2013
Just weeks away from giving birth to baby North and Kim experimented with some statement bangs.

February 2013
Pregnant with baby North in the early part of the year and Kim was positively glowing, channeling Old Hollywood with this super side-parted sleek and straight style, topped up with diamond earrings and a berry lip colour.

October 2012
Just weeks away from announcing her pregnancy and Kim and Kanye stepped out for a fashion party with Kim working a gorgeous braided hairstyle and smokey eyes combo.

May 2012
Having just made her romance with Kanye West public, Kim looked every inch the starlet with this chic side-swept style, lashings of mascara and an orange lip.

March 2012
A classic Kim Kardashian look, the centre-parted super long Rapunzel locks were topped off with a daring icy blue shadow and, yep, you guessed it, lashings of mascara.

February 2012
Channelling a bit of a 60s vibe with this beehive-esque half-up, half down ‘do and a nude lip, Kim looked super dooper at a Fashion Week party.

January 2012
Celebrating a new year after a particularly show-stopping 2011, Kim once again goes Old Hollywood with her beauty look here.

September 2011
With a high-rise ballet bun, Kim made sure her eyes had plenty of sparkle when she stepped out with glittering gold party eyes just a couple of weeks after tying the knot in a TV special for her show Keeping Up With The Kardashians.

June 2011
Yeah… We actually can’t get over the length of her eyelashes.

Febraury 2011
At an La party in early 2011, Kim experimented with this kinda 60s style completely with brown smokey eyes – but, of course – and a back-swept bouffant with an interesting beaded head band.

February 2011
We loved this gorgeous and totally ethereal up-do Kim worked in 2011 with a gorgeous sugary pink lip and a simple skinny silver head band.

December 2010
Back to her red carpet best though in time for Christmas and Kim went with a tried and tested ballet bun.

September 2010
Kimmy K got into the swing of it on a brief trip to Munich’s Oktoberfest, rocking a, erhem, “traditional” outfit with some fishtail plaits. Random.

August 2010
Experimenting with bangs again in the summer of 2010, Kim looks gorgeous with delicate highlights through her raven locks.

December 2009
Readying herself for Christmas, Kim experimented with some ill-advised highlights through the lengths.

October 2009
Off duty running errands around her native LA, Kim’s hair was still primped to perfection.

October 2009
Channeling her idol Elizabeth Taylor for an appearance on The Late Show With David Letterman, Kim’s beauty look was all about the high-octane glamour.

September 2009
Working a distinctly more pared down beauty look – save for the gorgeous peony lip – this retro fabulous ‘do did all the talking, here.

August 2009
But if you thought that Kim’s post-pregnancy dip-dye was the first time she had experimented with blonder locks, how wrong you were. The naturally brunette beauty hit the bottle for a month or two way back in 2009, as well.

May 2009
At the 2009 Maxim Hot 100 Party in LA, Kim made a rare beauty misstep here with this green liner and severe slicked back hairdo. 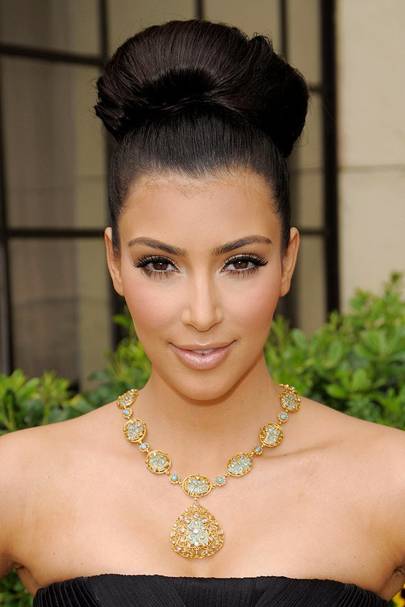 Febraury 2009
On the promo trail for their hit show, Kim joined her sisters for a photo call and sported a particularly vertiginous ‘do in the process.

August 2008
Going for something all together more au naturel at the Teen Choice Awards in LA that year, Kim looked the picture of elegance working just a statement berry lip.

July 2008
At a fashion event in LA and with her career finally on the up thanks to her and her family landing a reality TV show with the E! network, Kim proved she was already a dab hand in the make-up department with this glossy look.

March 2008
Simple smokey eyes and glossy curls were the order of the day in the spring of 2008 whilst on the press tour for her new show.

October 2007
Clearly Kim’s been a fan of super long lashes for a while as the starlet was wearing them back in 2007, as well. 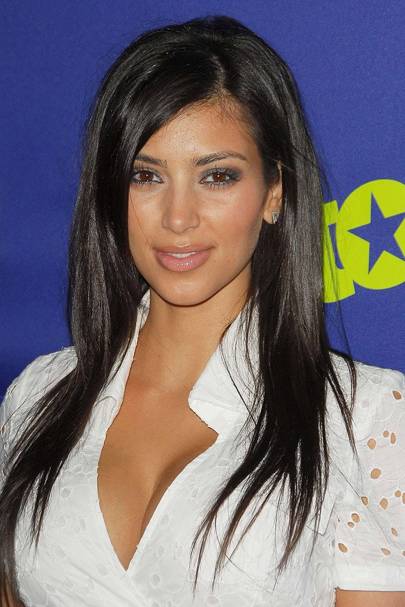 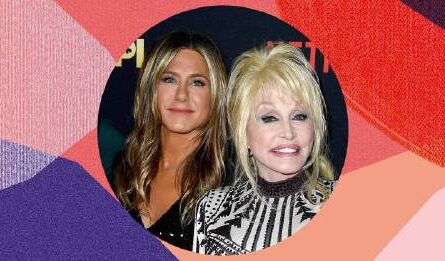 Victoria Beckham, I want to create, a beauty brand, of the that’s not tested, on animals!