There’s no denying Kim Kardashian’s fashion influence. On Monday, the reality star turned business savvy boss arrived at the Met Gala as if she had just stepped out of the ocean. Her dress, which was designed by Thierry Mugler and inspired by Sophia Loren’s look in the 1957 film Boy on a Dolphin, was literally dripping in crystals – but that’s not what caught everyone’s attention.

The dress is so cinched at the waist, people seem to think Kim had plastic surgery in order to squeeze into it. After she revealed her look on social media, her pages were immediately flooded with comments from followers saying she must have had ribs removed. Yikes.

“Getting ribs and organs removed before events, celebrities setting new standards for 2019,” wrote one follower. “She’s gone way too far with the lip/waist reduction,” added another. “It’s called getting your ribs removed,” someone chimed in.

Kim’s waist does look seriously small – or “snatched,” as people are calling it – but it’s safe to say these accusations are a stretch. She admitted to wearing an extremely tight corset to the event, exaggerating her shape.

“Once we’re all at the top of the carpet we can all take a deep breath,” she told Vogue. “I don’t know if I can in this corset. I honestly had to do practice. It’s a proper corset by Mr. Pearl. I never had one like this, it is insane.”

Even Kim’s personal trainer, Melissa Alcantara, has come to her defense. Alcantara took to Instagram Stories “to make things clear.”

“1. This dress is corseted BUT 2. Kim trains her ass off 6 days a f*cking week, she wakes up early AF and is dedicated. 3. I paved the road for her but SHE did the work! MOST IMPORTANTLY I don’t give a shit about your opinions on her body, if you think [it’s] fake or not! I see her every morning, I see her train and I see her sweat and I see all the work she does outside the gym and THAT is commendable!” she wrote.

It’s also been reported that Kim was on a strict, plant-based diet in the weeks leading up to the Met Gala and that she plans to reward herself as soon as it’s over. “I have doughnuts waiting for me tomorrow morning, hot, fresh doughnuts,” she told Vogue. “They are special ones from here vanilla with rainbow sprinkles.”

Just a reminder to women who look up to Kim K, your body doesn’t usually naturally look like this. Kim is beautiful and i am all for doing what you want with your body but don’t feel shamed for not meeting these standards

The internet is clearly divided on subject, but one fan makes a good point: “Kim is beautiful, and I am all for doing what you want with your body but don’t feel shamed for not meeting these standards.”

The Met Gala calls on the biggest stars from the worlds of film, music, fashion, and more to converge in NYC and show us their most outrageous ensembles. This year, the theme was “Camp: Notes on Fashion,” and while some stars appropriately went all out with the kitschy, over-the-top theme (we’re lookin’ at you, Katy Perry), others kept things slinkier and sexier on the red carpet.

As one of the event’s cochairs, Lady Gaga got things started with not one but four fun looks, while Pose‘s Billy Porter arrived on the shoulders of not one but six shirtless men – only the Met Gala, right? Couples like Kim Kardashian and Kanye West and Tom Brady and Gisele Bündchen showed off sweet PDA, while Zendaya had a Cinderella moment and Jared Leto carried his own head around (yes, really).

Inside, it was just as exciting, with lots of mixing and mingling between the well-dressed guests. Kim and Jennifer Lopez compared backsides, Katie Holmes and Jamie Foxx shook hands with Cardi B, and Tiffany Haddish may have been snacking on the chicken she brought in her purse – it’s unclear.

Keep reading for over 150 of the most glamorous, fun-filled photos from this year’s Met Gala.

Fanny Pack Sandals Have Arrived Just In Time For Summer

This was the bag *everyone* carried at fashion week 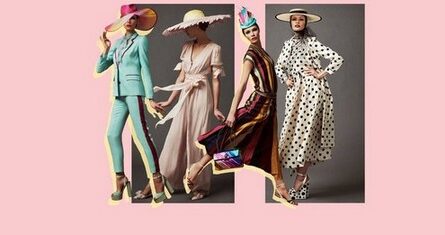 Ascot’s strict dress code welcomes jumpsuits (but cropped trousers are off the menu!)