Light and EASY side salad. And so pretty! Perfect with chicken, fish, or steak. Have you ever seen siblings who are almost identical but have different hair color? That’s what red and white quinoa are like!

The two are nearly identical in terms of flavor and texture – I think red quinoa is every so slightly chewier and nuttier – but one is pale and the other is a distinctive red brick color.

I like using red quinoa because it’s so striking, particularly tossed in a salad with baby arugula and creamy cubes of feta.

Quinoa (pronounced KEEN-wah) is neither a grain nor a cereal, but is actually the seeds from an ancient plant originally found in the Andes. Its popularity soared when gluten-free eating became more mainstream in recent years. 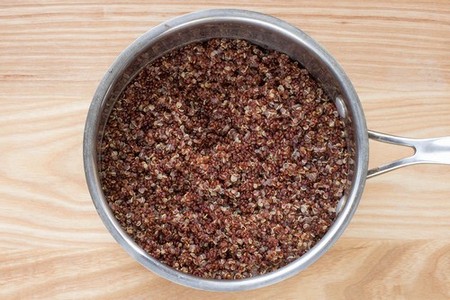 White quinoa was the first to appear in grocery stores, followed by the red variety. Now you can also buy black, or a tricolored mix of white, red, and black.

I love red quinoa for this recipe – it’s so pretty! It’s sold in bulk at my local natural foods market, but I also like Bob’s Red Mill brand, which you can find online. Since the flavor isn’t that different between the colors, you can also substitute any other quinoa if red quinoa is hard for you to find.

The seeds have an outer layer that can taste bitter, but that can be removed by either rinsing the grains or toasting them. I like toasting since this gives the quinoa a more deeply nutty flavor. Just shake the dry quinoa over low heat until it starts to change color, then simmer in water. 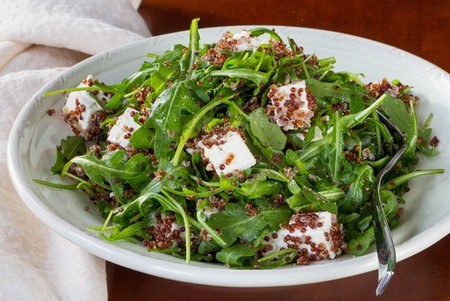 Like rice, quinoa typically uses a 2-to-1 water-to-grain ratio. I’ve found that if you scoop out 1 tablespoon of water for each cup you use, you usually have exactly the amount of liquid you need with no need to drain the quinoa after cooking.

When quinoa is cooked, it’s tender but delightfully chewy. Sprinkle it sparingly with olive oil and leave it to cool. At this point you can toss it with your salad or refrigerate it for a day or two before serving.

The seeds add heft and plenty of protein to your salad bowl, and they have so much flavor that you need only a little lemon juice and olive oil to dress the salad. You’re getting a low-fat, nutritious plate full of good textures and tastes!

1 Toast the quinoa: In a dry sauce pan over low heat, toast the quinoa, shaking the pan often, for 5 minutes, or until some of the grains start to turn a darker color.

2 Cook the quinoa: Add the water and salt to the pan with the quinoa. Turn the heat to high and bring to a boil. Reduce the heat to low and cover the pan. Simmer for 15 minutes, or until the quinoa is tender when tasted and all the water is absorbed. If there’s water in the pan, let the quinoa cook 2 minutes more.

3 Cool the quinoa: Tip the quinoa into a large bowl and sprinkle with 1 tablespoon of the olive oil. Stir well and leave to cool, stirring occasionally. (Once cooled, the quinoa can be refrigerated for a few days before using.)

5 Toss the salad: Add the cooled quinoa and feta cubes to the bowl with the greens. Toss well and taste for seasoning. Add more salt or lemon juice, if you like. Serve immediately. 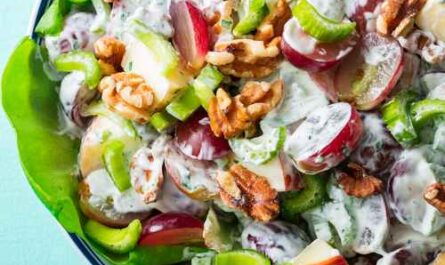