According to The Hollywood Reporter, Riverdale showrunner Roberto Aguirre-Sacasa is putting a new spin on the series so we’re expecting plenty of dark twists and murder mysteries.

Although the details are pretty scarce, there’s said to be a brand new storyline in the works and new characters.

It’s not yet been confirmed if some of the former cast will be back in the reboot or whether the series creator, I. Marlene King, will be involved on this new spin, especially since she left Warner Bros TV for Disney last year.

If you’re reading this, you were probably just as OBSESSED with Pretty Little Liars, the dramatic teen mystery drama that took over our screens circa 2010 to 2017 and so you’ll be thrilled to know that reboot might be in the works, three years after PLL’s seven-year run. 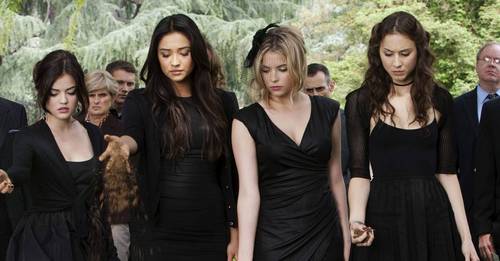 For a recap (‘cos 2017 pretty much feels like a lifetime ago RN), the TV show was based on Sara Shepard’s novels, which followed the lives of five teenage girls, Spencer, Alison, Aria, Hanna and Emily, and how their friendship tears apart after their leader, Alison, goes missing. The original cast included Lucy Hale, Troian Bellisario, Ashley Benson, Shay Mitchell, Sasha Pieterse and Janel Parrish.

Lucy Hale, part of the original cast, did once say that she’d consider returning if there was an opportunity. In an interview with Entertainment Tonight she said: “I feel like we’d need a little more time to pass.

One Twitter user wrote, “Can’t believe companies are so out of ideas that they have the NEED to reboot Pretty Little Liars.”

Others are more up for it, though – “Found myself getting too excited about the Pretty Little Liars reboot” one fan wrote, with someone else saying, “@hbomax Is it true that you will reboot Pretty Little Liars? The best series in the world.”

If You Struggle With Pain Caused by Flat Feet, These 3 Yoga Moves Could Help

Yoga Can Help You Lose Weight, Especially If You Do This Type of Practice