Tomatoes in own juice, canned in jars for the winter with pepper and chili is the most delicious tomatoes in the winter, skinless, in a spicy sweet and sour sauce-puree. These blanks do not belong to the category of “put it in a jar filled with marinade”, there – will have to Tinker. 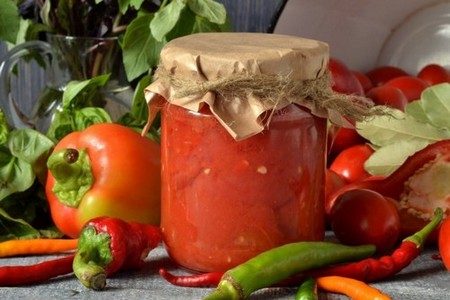 But as they say, the devil is not so terrible as he is painted. First, the skin with ripe tomato easily removed. Second, the blender, unlike the old grinder, turns the tomatoes into a puree in seconds. Thirdly, it is better to spend 15 minutes on the sterilization of workpieces than the same 15 minute trip to the store for canned vegetables.

Tomatoes in their own juice with bell peppers for the winter

Ingredients canned tomatoes in their own juice with bell peppers:

The method of preparation of canned tomatoes in their own juice with bell peppers for the winter.

For the sauce-puree a selection of the most ripe tomatoes. If the vegetable just broke the skin, and visible signs of damage no, it is the most suitable material.

So, my vegetables, cut in half, cut out the stalk. Put the chopped vegetables into the blender, turn them into puree. 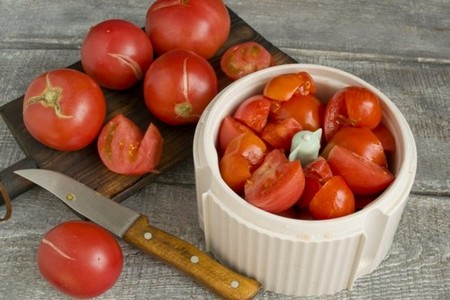 Take tomatoes and puree them in a blender

Tomato puree squeeze or wipe through a colander to remove skins and seeds. 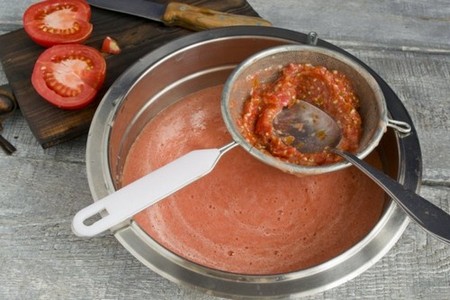 Strain the tomato puree through a sieve

Sweet bell peppers red, orange or yellow peel from the seeds, flesh cut into cubes, throw into a blender. 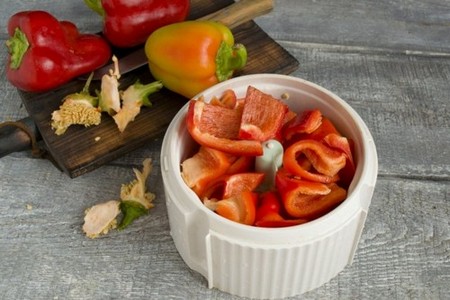 Bell peppers add few pods of Chile. Depending on taste preferences it is possible to make blanks with a pungent taste or sweet and sour.

Grind the peppers in blender until smooth paste. Mix the pepper with the strained tomato mass. 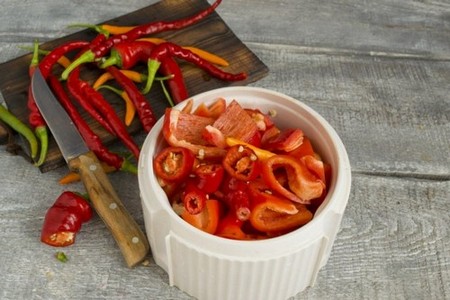 Banks for my blanks in warm water with baking soda. Then dry the jars in the oven or sterilize them over steam. Boil lids for 5 minutes.

Put the tomatoes in boiling water for 30 seconds, then put in a bowl with cold water, remove the skins. 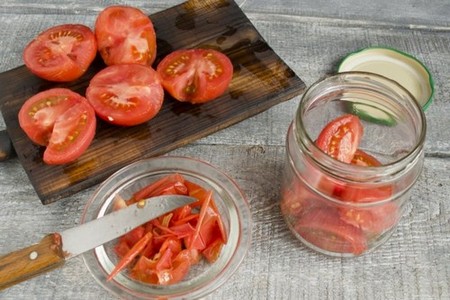 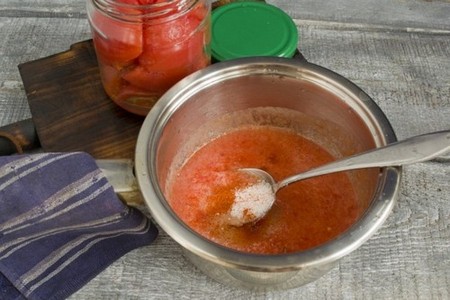 Boil the mixture of tomato paste, chopped peppers and spices 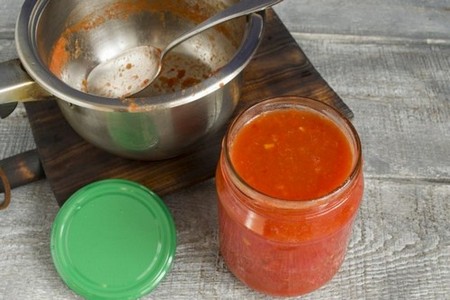 In a container for sterilization, put a towel on it set the jars with the tomatoes, pour hot water.

Heat the water to 85 degrees Celsius (it is better to use a kitchen thermometer), do banks with a capacity of 0.75 l for 15 minutes. If sterilizing the water begins to boil, you must add cold water to lower the temperature. 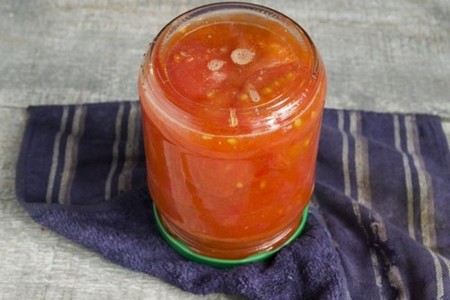 Sterilize cans of tomatoes and puree. Twists and turns

Get cans of canned tomatoes with tongs, tighten the lid. Turn jars top to bottom, after cooling, put them in a cool dark place for storage.

Tomatoes in their own juice with bell peppers for the winter

By the way, so canned tomatoes in own juice, you can use for soups and sauces, for example, a classic Italian Bolognese.

Tomatoes in their own juice with bell peppers for the winter ready. Cook with pleasure and Bon appetit! 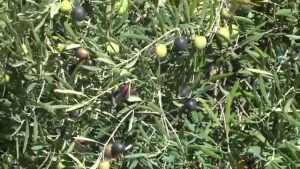 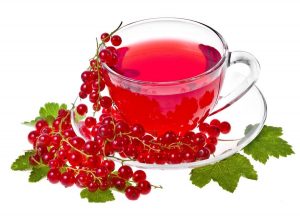 Korean salad with cucumbers and tomatoes for the winter