The singer Peter Gabriel saved his wife’s life after she was told her melon-sized tumours were incurable.

Meabh, 47, who is married to the former Genesis star, was diagnosed with an aggressive form of non-Hodgkin’s lymphoma 18 months ago and underwent crippling chemotherapy.

After being told there was nothing more that could be done, Meabh’s family came across a treatment, known as CAR T-cell therapy, online that cured her after a single infusion.

Gabriel, 68, has thanked doctors for saving ‘the woman I love’ and urges other cancer sufferers to never give up hope.

His wife’s miraculous recovery has inspired Gabriel to create an iTunes-style platform that allows different doctors to monitor a patient’s condition, such as cancer, heart disease or stroke, from their home. 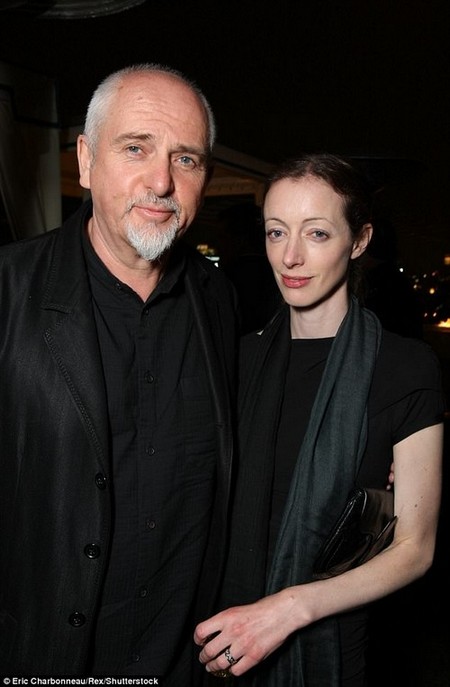 The wife of the singer Peter Gabriel (both pictured in 2009) has recovered from an aggressive cancer due to a pioneering stem-cell treatment. She had tumours the size of melons

WHAT IS CAR T-CELL THERAPY?

CAR T-cell therapy involves changing a certain type of immune cell in the laboratory so it attacks tumours.

T-cells, which destroy viruses, are first taken from a patient’s blood sample.

A gene is then added to the cells that causes them to bind to a certain protein on the patient’s tumours.

Large numbers of these engineered cells are grown in the lab and infused into the patient.

This is then followed by a chemotherapy session.

If all goes to plan, the T cells multiply in the patient’s body to kill cancer cells.

In 2017, two CAR T-cell therapies were approved by the US drug-approving body the FDA for the treatment of children with a form of leukemia and adults with advanced lymphomas.

It is unclear whether the treatment is effective against solid tumours, such as breast and colorectal.

Side effects can include a dangerous drop in blood pressure and brain swelling.

‘You saved the woman I love’

Speaking to scientists at the Unite to Cure Fourth Vatican International Conference, Gabriel said: ‘You saved the woman I love.’

Addressing cancer patients, he added: ‘Stay focused, get the best advice and believe in yourself.

‘Don’t let someone say, “There’s very little we can do for you” and think that that’s the end,’ The Telegraph reported.

After Meabh’s devastating prognosis, her family came across the scientists Dr William and Vincent Li, who are both from The Angiogenesis Foundation, while desperately searching for a solution online.

Gabriel added his wife is doing ‘remarkably well’ but claims her treatment cost around $1 million and he is keen to make such therapy more available to the masses.

He believes allowing doctors to communicate via the health platform, which is called The Tap, will help boost patient recovery.

Gabriel met Pope Francis while speaking at the Vatican. He was discussing plans to launch an iTunes-style platform that allows different doctors to communicate over a patient’s healthcare

This comes after research released last month suggested scientists are developing a test that detects cancers from patient urine samples.

The engineering company Hitachi, which developed the technology two years ago, will analyse 250 urine samples for breast, colon and childhood forms of the disease alongside Nagoya University in central Japan.

Company spokesman Chiharu Odaira said: ‘If this method is put to practical use, it will be a lot easier for people to get a cancer test, as there will be no need to go to a medical organisation for a blood test.’

He added small children will particularly benefit from the diagnosis method, which may be available in 2020, due to them often being afraid of needles.

The technology works by detecting waste materials in urine samples that act as ‘biomarkers’ for forms of the disease, according to a Hitachi statement.

It aims to improve early cancer detection, save lives, and reduce the medical and social costs of treatment, according to Mr Odaira.

Experiments assessing the accuracy of the method are due to end in September.

Soldiers should be prescribed ecstasy to treat PTSD, study claims