People who follow the Paleo diet should eat more fish, while avoiding nuts and berries, to truly eat like a caveman, new research suggests.

The trendy Paleo diet, which encourages people to eat foods available to humans in prehistoric times, was thought to include vegetables, fruits, nuts, roots and small amounts of lean meat.

Yet, research suggests up to 60 per cent of our ancestors’ protein came from fish, with just three per cent from mushrooms, berries and nuts, a study found.

Study author Mr Boethius from Lund University, said: ‘The importance of fish in the diet has proven to be greater than expected.

‘So, if you want to follow a Paleo diet you should quite simply eat a lot of fish.’ 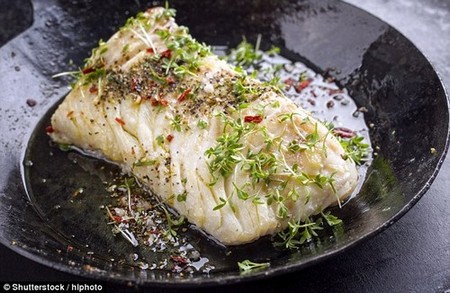 WHAT IS THE PALEO DIET AND IS IT HEALTHY?

The caveman, or Paleo, diet are related to low-carb eating approaches.

It recommends shunning processed foods and following a diet similar to that of our ancestors in the Paleolithic period, which began around 2.6m years ago and ended about 12,000 years ago.

Definitions of the Paleo diet vary, but they tend to exclude grains, which often results in a low-carbohydrate eating plan.

Both low-carb and Paleo diets encourage plenty of fresh produce, including vegetables, and little or no highly processed food.

Yet, these potential benefits are largely linked to the energy restriction they cause and are not directly related to avoiding carbohydrates.

The reason for the drop in energy (calorie) intake is that carbohydrates normally make up a large part of the Western diet.

Banishing carbs makes it difficult to make up for the lost energy intake as the food industry is geared to provide plenty of carbohydrate-rich foods.

Other studies suggest eating protein and fat keep you feeling full for longer, and may therefore suppress appetite. However, more research is needed to prove this theory.

There is some evidence that a low-carb diet can help people lose weight for up to six months.

A study of people with type 2 diabetes also suggests it can reduce the need for diabetes medication, even after two years.

The news is not all positive, though.

Paleo diets can cause side effects, such a diarrhoea, headaches and weakness.

They also tend to be more expensive than a regular healthy diet (as per government guidelines), and require careful planning to meet nutritional requirements.

Up to 40% of cavemen’s protein came from seals

Mr Boethius added: ‘At the Norje Sunnansund settlement, outside Sölvesborg in Sweden, you can see that just over half of the protein intake has come from fish, 10 per cent from seals, and around 37 per cent from land mammals, such as wild boar and red deer, and scarcely three per cent from plants such as mushrooms, berries and nuts.

‘On the island of Gotland, which did not have any land mammals apart from hares, the percentage of fish in total protein consumption was even higher at just under 60 per cent.

‘Here, seals have replaced the land mammals and account for almost 40 per cent of the protein intake, whereas hares and vegetables account for a negligible proportion.’

Results further suggest up to 40 per cent of cavemen’s protein came from seals.

Findings also suggest fishing was surprisingly common at all the sites investigated.

Freshwater favourites would have been perch, pike and burbot.

Next to the sea, herring, haddock, spiny dogfish and plaice were eaten.

It was previously believed prehistoric humans mainly consisted of mobile groups of big-game hunters whose protein intake came from herbivores, such as red deer, aurochs and elk.

The role of fishing was not recognised.

Mr Boethius added: ‘The dominance of fishing is a discovery that has an enormous significance for our understanding of how people lived.

‘Fishing is relatively stationary compared to the hunting of land mammals, which provides clear indications that settlements appeared in Scandinavia much earlier than researchers previously believed.’

According to Mr Boethius, the good fishing areas would have become scenes of conflict as well as settlement.

He said: ‘The increasing importance of fish means that the land was divided up.

‘For groups that continued to be mobile this meant the creation of no-go zones, that these groups were forced to skirt around in order to find food.

‘In the long term this leads to increasing “costs” for foraging strategies and an increasing tendency to settle is to be expected, as it becomes the best alternative.’

Just three per cent of our ancestors’ protein came from mushrooms, berries and nuts (stock)

Fish bones are much smaller and more brittle than those of mammals, and are therefore not as well preserved.

In an excavation, fish bones are almost impossible to detect while in the ground, requiring fine-mesh sieves to find them.