People who eat breakfast every morning are slimmer and less likely to gain weight over time, a new study has found.

Many skip their first meal in a bid to cut down on calories, including actress Joanna Lumley, but a Mayo Clinic study has shown that tactic is flawed.

The study of 350 adults found breakfasters had smaller waistlines in general – and over the next decade they gained a maximum of three pounds, while breakfast-skippers gained eight pounds of, in particular, dangerous belly fat.

The researchers said it is not clear why breakfast has such an impact on weight gain, but it is likely to do with the fact that people tend to squeeze more whole grains and fruits into their daily diet if breakfast is involved. 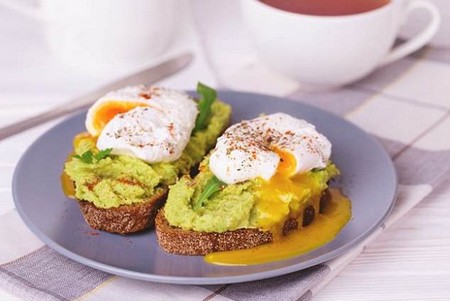 Eating breakfast is associated with less weight gain over time, a study has found

The new study was presented on Sunday at the Experimental Biology annual meeting in San Diego.

It was a bid to investigate how diet habits impacted obesity risk.

Dr Virend Somers, a cardiologist at Mayo Clinic, tracked 347 healthy adults, including 100 who said they never ate breakfast or skipped it between one to four times a week.

From the outset, those who ate breakfast at least five times a week were healthier.

Over the next 12 years of the study, that difference became even more stark.

On average, breakfast eaters gained fewer than three pounds by the end of the study. Meanwhile, those who occasionally skipped breakfast gained about five pounds, while the never-eaters gained eight pounds.

Most concerning, Dr Somers said, was that those who always skipped breakfast seemed to gain weight around the belly, which is more dangerous for general health.

The study did not specify what time or what exactly to eat, but Dr Somers endorsed a healthy varied plate of fresh fruits and/or vegetables with some whole grains.

The new study follows another by researchers from the universities of Bath and Nottingham in November, which showed skipping breakfast is linked to diabetes.

They found the process could help regulate the hormone insulin, which controls blood sugar levels, and prevent the body from producing excess fat which commonly triggers diabetes and heart disease.

Part of this has to do with the fact that the body’s blood sugar level is typically low in the morning, and breakfast helps replenish it – literally breaking the fast of the night.

Those who don’t get that initial fuel from food may be more likely to overeat later in the day, either due to low energy or because they feel they have ‘earned’ it.

Gay men are altering their voices to make them sound deeper