Watching the World Trade Center twin towers collapse in front of your eyes on live television is a moment that no child could ever really forget. I was seven years old when the 9/11 attacks happened, and I still remember this moment like it happened yesterday.

I walked into the lounge where my parents were watching the news on TV and first saw the huge black clouds hovering over these collapsing buildings, and then their blank faces. At first, I didn’t realise what was happening, just that these buildings were falling down. But then I heard the word ‘terrorism’ and ‘Islamists’.

My parents were not naive in the sense that they wanted to shelter or protect me from how people viewed terrorism – as a Muslim kid it’s something you just have to be aware of – but they also recognised that I was only seven years old. And so, they told me that some ‘bad Muslims’ had flown those planes into the towers.

I remember feeling initially detached from the whole situation because the people responsible were ‘bad people’, and my family and I were not. I didn’t think it had any relation to me or my Muslim identity whatsoever. I was just sad that it happened and so many people got hurt or lost their lives. A pretty normal reaction for a seven-year-old to have to something so horrific. 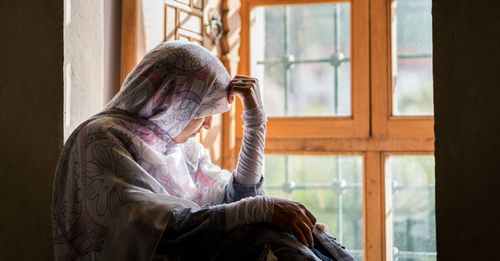 But then I noticed how others would talk to me or act around me at school, and I started to feel differently. Kids in my class became more wary around me. They would ask me questions about the attacks, like did I know the attackers or were my family related to them. Some would even ask why my family and I practised a religion that was violent and evil.

“I started to internalise the links between Islam and terrorism, and I started to hide the Muslim aspect of my identit

At that age, these are questions that were likely not coming from a place of maliciousness; but simply kids trying to understand the world better. They assumed because I was a Muslim classmate that maybe I would have more answers for them. But this is only something I can now recognise in hindsight. At the time, it felt odd and alienating to be constantly asked about something I myself knew very little about. It was around this time that I started to internalise the links between Islam and terrorism, and I started to hide the Muslim aspect of my identity.

Things did not get better over the years as I left primary school and went to high school. The 9/11 attacks made a deep and marked impression on the world, especially on how the West viewed and approached Muslims. The two became synonymous with each other. I still found myself fielding regular microaggressions in the form of constant questioning about Islam or offhand comments that people didn’t think I picked up on.

I am privileged in the fact that I am not easily identifiable as a Muslim woman because I don’t wear the hijab. But for my mum who does, she experienced a fair amount of Islamophobia and racism after the 9/11 attacks. My parents moved to the UK in the mid-1990s and before the 9/11 attacks, they didn’t experience anywhere near the amount of Islamophobia and racism that followed.

“Islamophobia definitely increased and became more prominent after 9/11, with tensions running high and people becoming a lot more bold in voicing their comments and abuse,” she explains.

She also recalls a particularly upsetting incident that occurred a few months after the attacks. “I was on the bus on my way to the school pickup, when the driver started shouting at me and repeatedly asking me to show him my ticket even though I already had. He wasn’t asking any other passenger to do the same.”

She adds: “As the only hijab-wearing woman on the bus, you could tell he’d singled me out, both as a Muslim and a person who didn’t speak English very well, and wanted to vent his frustrations out on me.” And my family are not the only ones who have both noticed and experienced this increase in Islamophobia.

In the UK, Islamophobic hate crimes only started being recorded as such in 2015, so statistics relating to anti-Muslim attacks immediately following the 9/11 attacks are somewhat limited. However, opinion polls around that time paint a grim picture for what life was like for Muslims. A few weeks after 9/11, in October 2001, 22% of British people reported a changed attitude to Islam as a whole, and 13% said their feelings about British Muslims had become less favourable.

“Since the 9/11 attacks, half of mosques in the UK have been subject to racist and Islamophobic attacks

In fact, people viewing Islam as incompatabile with British values doubled between 2001 and 2006, and perceptions of Islam as a threat to free speech and democracy increased from 32% immediately after 9/11 to 53% in 2006. And little has changed since. Since 2006, polling has consistently found that one in five people in the UK hold strongly negative perceptions of Islam and Muslims, especially when it came to associations with violence. This is reflected in the fact that since the 9/11 attacks, half of mosques in the UK have been subject to racist and Islamophobic attacks.

Noor*, 25, also recalls how life changed for her after 9/11. “I don’t remember the exact moment I knew about the attacks, but I do remember my parents trying to explain it to me as a child, telling me that people might ask me questions about Islam.” And she did get questions and comments from fellow classmates. Like myself, this questioning may have started off innocently as a child, but Noor says it became a lot more loaded, and sometimes malicious, later in her school and university life.

“There was this one moment in my first year of university where I attended a welcome event and started chatting to this girl. Not long into the conversation, she started asking me about Islam and how violent and anti-feminist it was, demanding answers from me.” Noor adds that “whilst everyone else was meeting new people and talking about their courses or hometowns, I had to stand there and field Islamophobic questions about my religion from a person I just met.”

Islamophobia has become both normalised and justified since the 9/11 attacks due to Muslims being intrinsically linked to terrorism and violence, which has provided a solid base for the expansion of the Islamophobia industry. It has meant Muslims are constantly monitored and regulated, if that’s being ‘randomly’ stopped in airports or being reported to anti-radicalisation programme Prevent for reading the Quran.

We shouldn’t have to constantly defend ourselves and our religion just so that people see us as human and deserving of safety and respect. We shouldn’t have to constantly be asked to condemn the acts of others who act in the name of our religion. When a non-Muslim white man drives a van into a mosque, killing and injuring people, we don’t ask his entire community to come out and publicly condemn his actions. And so, it shouldn’t fall to Muslims to do the same.

The 20-year anniversary of the 9/11 attacks will likely be a day of reflection for my family and I, thinking about all the people that lost their lives that day, but also all the lives lost in places like Afghanistan and Iraq who were subsequently invaded by the US following 9/11. Islamophobia is something we’re always aware of, but will especially be aware of on the anniversary as underlying tensions are brought back to the surface. I hope one day, Muslims won’t need to think twice about how they exist, just to keep themselves safe.

*Name has been changed.

I grew up in the Children Of God ‘sex cult’, subjected to beatings, abuse and exorcisms