Now the pair return for the sixteenth series of Ant and Dec’s Saturday Night Takeaway and here they discuss the power of their brotherhood, the challenges they have learnt the most from and their boy power…

Everyone has an Ant and Dec moment that illustrates a point in their life. From starting out in Byker Grove as teenagers to rumbling around as pop stars, PJ and Duncan, and then their careers as TV presenters, Ant and Dec have been a constant in many of our lives.

For me, Ant and Dec will always symbolise Saturday mornings, watching the pair alongside Cat Deeley on SMTV: Live. The sketches were epic from Chums to Cat the Dog, the trio gave me LIFE every single week. So, meeting them in real life is quite the moment for their 10-year-old fan boy!

Before we go any further, I need to tell you that I literally lived for SMTV: Live…

Ant: We loved that. I remember Phillip Schofield saying to us, just before we started SMTV: Live on Saturday mornings because he used to do it, ‘it will be the best fun you will ever have on telly.’ You know what the innocence and freedom we got on that show you don’t get anywhere else. We could just mess about.

Dec: It was all before social media, everyone was watching TV and the viewing figures were off the charts for a Children’s TV show. Everyone was talking about it. It was such fun.

As an adult I now wonder, how did you deal with the hangovers?

Ant: We never drank on a Friday night! One year we did, that was the millennium. We were on air that next morning. We were in Newcastle, so we drove down through the night and went live on air, slightly worse for wear. That was the only time.

Dec: We used to go straight out from the show on a Saturday, so Saturday was a sesh. Sundays were a write off!

What was the fondest memory from that time?

Dec: I think towards the end when we did the wedding in Chums. Cat (Deeley) got married and the guest list was incredible. Mariah Carey was Cat’s Bridesmaid; Frank Skinner was the vicar. All the classic nineties pop groups were on it – it was incredible.

Now you are back with Saturday Night Takeaway…

Dec: We always had one eye on doing Saturday night TV even when we were back doing mornings. That’s where we wanted to go to get a bigger audience. This show had been our ambition – this was the show we always wanted to make. We are just about to do our sixteenth series and I can’t believe it!

So many times, on other networks they try to do Saturday night TV shows and they just don’t work. What is it about this show which really works?

Ant: We only ever do seven in a series. The team that work on it view every show like it’s the biggest show they have ever worked on. We need to have the best surprises, the biggest guests, the best under cover and hidden cameras pranks. We started working on this series last summer and started filming last month for the first episode so there is a lot of pre-planning. 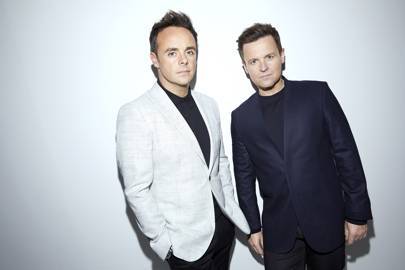 Dec: We try and evolve the show every year – we never repeat an item. We never want the audience to get bored. Anything could happen and anyone could be part of the show. Even people at home eating a bowel of quavers. We want to involve everyone.

You are masters of a good prank – but which one has been your favourite?

Dec: I think it was Gordon Ramsey. We took over his dressing room and I locked myself in his toilet, pretending to be a work man who got caught short. I left a dirty burrito on his mobile phone as apparently; he hates greasy food. He hit the roof. We were locked into our dressing room and so Ant put an axe through his dressing room door. That was the only time we have done a prank and I thought I was actually going to get punched, when I asked him for a selfie. He nearly punched me in the mouth!

Ant: For me it was when we flew to American Idol and we dressed up as two American people who auditioned for the three original judges. We sung Paula Abdul’s hit, Opposites Attract. And we really surprised Simon, he had no idea. That’s when I knew we were onto something.

I talk about sisterhood a lot but what do you think your careers have taught you about the power of brotherhood?

Ant: Doing it with someone else is a good lesson in dropping the ego. You need to be constantly conscious of the other person, it needs to work for both of you not just one of you.

Dec: I think it teaches you tolerance and to be accepting of other people’s ideas and be inclusive which is something we need to do more of in society. I think working as part of a brotherhood shows you can achieve personal satisfaction in a team.

If you could sit the two of you on Byker Grove across this table from you right now, what advice would you want to give them?

Dec: Maybe, are you sure about the rapping thing? I am joking – I wouldn’t change it for the world.

Ant: I wouldn’t change any of it! I think I would say to them, you are going to have downs but ultimately you will be happy.

Dec: I think the piece of advice would be to stick together, trust one another and you are going to be alright. I think if you sat me down as one of those boys and told us what we were going to achieve, I wouldn’t have believed you. I would have said, ‘wow, that is a dream.’ I would say to them rest assured your dreams will come true and they have. We have so many moments where we think, ‘how lucky are we?’ Those moments are never lost on us.

Ant: Then we would ask to borrow your time machine!

You are well known for creating ridiculous challenges but what do you think has been the biggest challenge for you to overcome and how has that shaped you?

Ant: I think it’s the failures that shaped us the most. We have a show very early on called Slap Bang on a Saturday night and it didn’t work. It started off peak time and started getting earlier and earlier in the schedule. I think that that taught us you have to adapt. We went back, licked our wounds and went back to it.

Dec: Not everything you are going to do is going to be a hit. I think you learn every day. You can’t buy experiences; all these experiences shape you.

Ant: We learnt a lot from doing Panto, actually back when we were still doing SMTV: Live. We learnt how far we could push things and the show was all the better for that. I think that taught us you really have to know your audience because you could see how they would react to things. In this game knowing your audience is so important, early doors.

You have learnt so much about yourselves, as well too, right?

Dec: From Byker Grove to our music careers where we travelled the world touring, we had amazing times as far east as Japan which was eye opening for us at 19 years old, it’s been a journey!

I can only imagine what went down…

Ant: They were eye opening times!

What’s the biggest takeaway you have taken from your career so far?

Ant: I think if you are having fun the audience will have fun too. If you are enjoying yourself its infectious. I think people watch us and see its two best mates having a laugh and they can relate to it. We all have a best mate and think that’s how people can relate to us.

Dec: I think from doing so many live shows it gives you a real appreciation of being present. You don’t know what’s going to happen, you don’t know what is around the corner. Don’t spend so much time worrying about the future or having regrets about the past, be in the present.

We talk about girl power, but you are a great symbol of boy power…

Ant: If we turn boy power into a sketch, we will credit you!

Ant and Dec’s Saturday Night Takeaway returns to ITV on Saturday at 7.30pm

Ellie Goulding: renzied person in my 20s, but I’m much more confident in my 30s