As a woman, it can be painfully frustrating trying to get a medical diagnosis. In fact, the average time it takes to receive diagnosis for endometriosis was seven and a half years from the first onset of symptoms and a 2015 study found there was a significantly longer time from the onset of symptoms to diagnosis in female patients in six out of 11 types of cancer.

As well as holding your own when visiting your doctor (if you feel that something is wrong, don’t let it go until it’s taken seriously and you are properly assessed), it’s also important to recognise the initial symptoms of problem so you can seek treatment at the first possible opportunity.

One of the most commonly dismissed and misdiagnosed women’s health conditions is pelvic congestion syndrome. According to the British Society of Interventional Radiology, it is a cause of chronic pelvic pain in approximately 13-40% of women but despite being so common, it is often misdiagnosed as endometriosis, which delays treatment and can be incredibly distressing for the sufferer.

Here, Professor Mark Whiteley, Consultant Venous Surgeon and Founder of The Whiteley Clinic, tells us everything we need to know about the condition, from the warning signs to the tests your doctor should do. 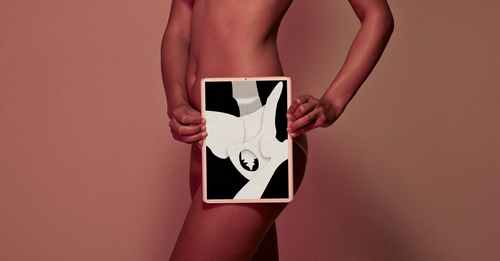 What is pelvic congestion syndrome?

“Pelvic congestion syndrome is a medical condition caused by varicose veins inside the lower abdomen and pelvis. Unlike varicose veins in the legs, these veins cannot be seen on the skin’s surface,” explains Professor Whiteley.

According to Professor Whiteley, a varicose vein is caused by valves that have failed. “When these valves fail in the pelvic veins, blood that should be pumped out of the pelvis and back to the heart, falls back down the veins and into the varicose veins,” he says.

“This stops the normal blood circulation to the pelvic organs and causes the large varicose veins to push on the bladder, bowel, vagina, and pelvic floor. In addition to this, the poor circulation of the venous blood increases the risk of inflammation in the pelvic veins.”

Is it only women who get pelvic congestion syndrome?

While more commonly thought of as exclusive to women, Professor Whiteley explains that the condition can affect men as well, “the condition used to be thought to be most common in women who have experienced pregnancy; however, we have now seen it in women before pregnancy, those who have never been pregnant and in post-menopausal women. We have even found out that it affects men.”

What are the symptoms of pelvic congestion syndrome?

As well as uncomfortable and chronic pain, which is often described as a “dragging” sensation or a “heaviness” in the pelvic region, Professor Whiteley explains there are a number of other signs and symptoms to look out for.

“This chronic pain may be worse when standing and sitting up, and in some cases, the pain may also turn into a sharp stabbing sensation that is commonly associated with low back pain and even hip pain.”

“Some women will also experience an irritable bladder and bowel, because of the weight the swollen pelvic veins are putting pressure on the bladder and rectum. Women suffering with pelvic congestion syndrome are also prone to painful menstruation and often experience a deep discomfort during or following sexual intercourse.”

How does pelvic congestion syndrome differ from endometriosis?

As pelvic congestion is not well known, many women with chronic pelvic pain are mis-diagnosed as endometriosis. “Endometriosis is a condition where tissue similar to the lining of the womb starts to grow in other parts of the body, most often the ovaries and fallopian tubes. This endometrial-like tissue will thicken and break down during a menstrual cycle, however, because there is no way for the tissue to exit your body, it will become trapped. This can cause severe pain, especially during your period.”

What are the causes of pelvic congestion syndrome?

While there is no single cause of pelvic congestion syndrome, there are a number of factors that can increase your risk and make the chance of developing pelvic congestion syndrome more likely. “The most significant of these is if you have had more than one child, as pregnancy can alter the structure of the pelvic, which can in turn, affect the blood vessels,” explains Professor Whiteley. “In addition to this, during pregnancy, the volume of blood in a woman’s body increases, putting more pressure on the veins while the higher levels of oestrogen weaken the blood vessel walls.”

According to Professor Whiteley, other risk factors include having a close family member who has the condition and is commonly found in women who have leg varicose veins, haemorrhoids (piles), or intimate varicose veins of the labia, vulva, vagina or perineum.

What is the treatment for pelvic congestion syndrome?

Luckily, if the condition is diagnosed before worsening, treatment can be relatively non-invasive and great success rates. “At The Whiteley Clinic, we treat patients suffering with PCS with a procedure called Pelvic Vein Embolisation. Pelvic Vein Embolisation is an x-ray technique where very thin catheters are placed directly into the veins that need treatment,” explains Professor Whiteley. “A catheter is placed into a vein under local anaesthetic and ultrasound control. Once the catheter is in place, we use a combination of foam sclerotherapy and specialist inert metal coils. These are placed into the vein, which closes it and stops the pelvic vein reflux. This procedure is performed under a local anaesthetic and is a walk-in, walk-out procedure, meaning there is minimal discomfort and patients can resume their normal daily activities once they leave the clinic. Our research has shown that this is a highly effective technique with exceptionally low risks.”

Getting fully vaccinated cuts the risk of long Covid in half, according to a new study of millions of people in the UK