Even though we don’t really know what it is, homeopathy is piquing our interest. In fact, the search term is taking off, alongside our growing efforts to ensure our wellbeing.

What do you think of when you hear the word ‘homeopathy’? For me, it feels vaguely familiar – wellness-y, soothing, relaxing – maybe something to do with alternative medicine? “It’s to do with herbs and stuff,” my mate told me, when I asked her what she thought it meant. “Ummmmm???” said another.

But, despite some enthusiastic celebrity fans that include the likes of Cindy Crawford, David Beckham, Emma Watson and even Prince Charles (who became patron of the UK’s Faculty of Homeopathy this year), the alternative medicine, which offers up tinctures and remedies derived from nature to combat each individual ailment, in contrast to the prescriptions and therapies we receive in conventional medicine, has had a chequered history.

The NHS publicly advised GPs against offering homeopathic remedies to their patients in guidelines released in 2017 after a House Of Commons report deemed the practice “scientifically implausible,” and now, the health authority is looking to ratify things further by blacklisting it completely. “There’s no good-quality evidence that homeopathy is effective as a treatment for any health condition,” they say. 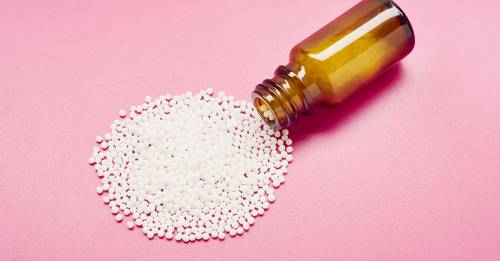 Even so, there are many who swear by the treatment, noting that it helped them when nothing else worked, we asked Dr Jonathan Hardy, qualified doctor and homeopathic expert to shed some light on what exactly homeopathy is and how it works.

“Homeopathy is a natural system of medicine which has been in use for over 200 years. The holistic nature of homeopathy means each person is treated as a unique individual and their body, mind, spirit and emotions are all considered in the management and prevention of disease. Homeopathy is used by over 200 million people worldwide to treat both acute and chronic conditions. It is based on the principle of ‘like cures like’. In other words, a substance taken in small amounts will cure the same symptoms it causes if taken in large amounts.”

How does homeopathy work?

“It uses mostly remedies made from minerals and plants which stimulate the patient’s own vitality and healing force to remove often deep seated and longstanding symptoms. A typical example of the like cures like principle is in hay fever when the main symptoms are stinging eyes and sneezing – the remedy Allium Cepa is made from onions and can cure those symptoms.”

Where did it originate from?

“A German physician named Samuel Hahnemann first discovered homeopathy in the modern age at the end of the 18th century. However, he really rediscovered the principles that the ancient Greeks and Egyptians had used in healing. After he wrote his work, The Organon of Healing, it rapidly spread throughout Europe and the rest of the world.”

What can it help with?

“Most illness can respond if it is possible to find exactly the correct homeopathic remedy for the individual case. That is the key with homeopathy: finding just the right remedy for the patient. For example we have over a 1000 remedies listed for headache – but you need to find the right one in the individual case. Conditions we see commonly include irritable bowel syndrome, inflammatory bowel disease, allergy problems, depression, anxiety, chronic fatigue, fibromyalgia, headaches, childhood disorders like hyperactivity and drug addiction.”

There’s a lot of debate as to whether homeopathy can make a real difference to health. What are your thoughts on this?

“There has actually been a lot of research into homeopathy. Up to the end of 2014, a total of 104 papers reporting good-quality placebo-controlled trials in homeopathy (on 61 different medical conditions) have been published in peer-reviewed journals. 41% of these reported a positive effect – this is remarkably almost exactly the same rate of success as is found in trials of conventional medicines. So there is plenty of evidence to show that homeopathy works. The people who attack homeopathy usually have not seen the research or sometimes they have but still refuse to accept it works because they cannot understand how it does.”

How do you work out which treatment each person needs? What questions do you normally ask?

“We are meticulous in getting the detail of a person’s complaint. For example if they have a headache we want to know whether it’s worse in warm air or cool air, what time of the day it gets worse, how it makes them feel and any other symptoms that happen at the same time. In addition we look at other issues like their personality and mood, their relationships and family history. So it is a long conversation. Usually at the end of about an hour and a half, it is possible to pick the one remedy that fits the whole picture exactly. Some of my favourite questions are: what effect does this have on your life? How does this condition make you feel? What is the worst thing about it?”

Have you seen a rise in interest for homeopathy in recent years as we get to grips more with wellness and mindfulness?

“We have seen a rise in interest in homeopathy and this is shown by not only increased consultations with Homeopathic Practitioners but also increased sales of over the counter homeopathic medicines both in this country and throughout the world. Homeopathy is actually the second most used form of medicine in the world.”

How often should people see a homeopathic doctor?

“We usually ask people to come back a few weeks after their first consultation – depending on the urgency of the case. If things are going well the appointments can be spaced out every two or three months and the aim is that after a year or two even with longstanding complaints that the problem should be solved once and for all and then treatment can stop.”

What sorts of things do you prescribe and how do they work?

“We use anything from the natural world. Essentially anything can be made into a homeopathic medicine and we do use some very interesting things apart from a whole array of beautiful plants and minerals.

One of the groups of remedies I have had particular success with recently have been the gems and homeopathic medicines have been made from gems like amethyst, diamond and opal. These are really good for deep seated “stuck” states where patients may have felt completely trapped – often in a family relationship which is very toxic. The effect is like bringing them out of the darkness into the light: rather like it is when a gem is brought to the surface from deep within a mine.

And we use unusual things too: I had a case of a five year old autistic girl who made no contact with anyone. She loved swimming pools but simply sank to the bottom of the pool where she believed she could breathe underwater. Born at 27 weeks because of lack of amniotic fluid in the womb, her mother said “she lives in her own world – as if she is in a
bubble”. Amniotic fluid as a homeopathic remedy rapidly turned her into a normal child. Her entire family considered it a miracle.”

What qualifications does a homeopathic doctor need?

“In addition to a doctor’s conventional qualifications they will have undergone a course of training in homeopathy from a registered teaching centre. There are also some excellent homeopathic colleges for people who do not have an existing medical qualification. I have quite a lot of contact with many of those colleges and I know that the standard of education is very high. It takes a lot of dedication and commitment to qualify as a homeopath these days and the people who qualify are sincerely dedicated to mastering the art of healing.”

Are there any people who homeopathy wouldn’t work on?

“Actually, I find quite often when patients come back for a second appointment with a significant improvement they rather shyly admit “I was a complete sceptic, I didn’t expect it to work.” So it doesn’t matter whether you believe in it or not. Really it depends most of all on whether you can find the right medicine in the individual case. When you really find the perfect medicine for someone the results are very good – often dramatic.”

This is the skincare regime Kayla Itsines says cleared her acne