The Whole Foods in my neighborhood has been carrying it with regularity. Here is a beautifully simple way to prepare it, taught to me by my friend and avid fisherman Hank Shaw.

The fillets are simmered in a Japanese-style broth of sake, soy sauce, rice vinegar, oil, and ginger. While the fillets are cooking, you spoon the simmering sauce over the top of the fillets so that the top gets infused with the sauce as well. The fillets are then topped with toasted sesame seeds and thinly sliced green onions.

Hank brines his fillets first, to firm up the flesh before cooking. I could go either way with this. If you have time, brine the fish (instructions are in the notes to the recipe), if not, just be more careful with handling the cooked fish, as it is rather delicate. 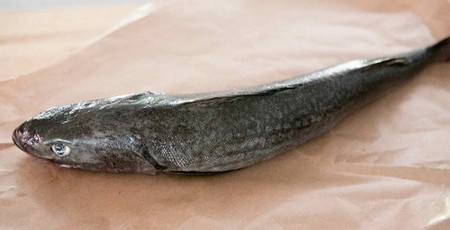 If you have a favorite way of preparing Pacific black cod, please let us know about it in the comments!

Pacific black cod (sablefish) have long pin bones along the sides of their fillets that are difficult to remove before the fish has been cooked. Once the fillets have been cooked, however, they are easily removed with tweezers or needle-nosed pliers.

Pacific black cod falls apart easily. If you want your result to be more firmly textured, brine the fillets in a salt brine of 1/4 cup of salt to 1 quart of water plus 2 cups of crushed ice for 20 minutes. 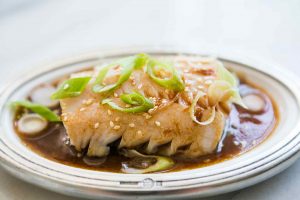 1 In a large sauté pan, mix the sake, rice vinegar, canola oil, soy sauce and ginger. Bring to a simmer on medium to medium high heat.

2 Lay each fillet in the pan. Use a spoon to baste the tops of each fillet until you see the flakes of the fish separate a little, which should take about 30 seconds to 1 minute per fillet. 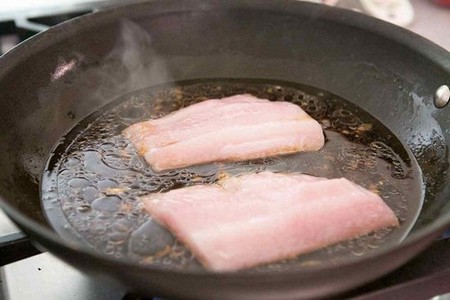 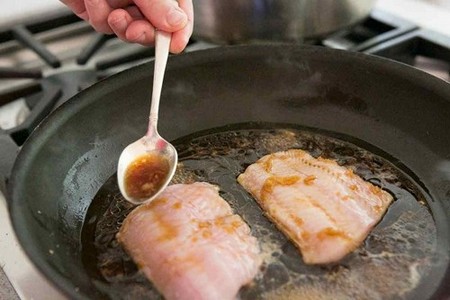 3 Gently move the fish to individual plates. If you want, use (clean) needle-nosed pliers or tweezers to remove the pin bones in the fillets.

4 Increase the heat on the sauce and boil vigorously for 1 minute, stirring constantly to reduce the sauce. Spoon a tablespoon or more of the sauce over each fillet and discard the rest. Drizzle a little bit of sesame oil over each fillet, then garnish with the green onions and toasted sesame seeds.