A nine-year-old boy is desperately waiting for surgery to remove an agonising belly-button hernia that is almost the size of two cricket balls.

The growth has left the youngster unable to walk or fit properly in clothes, as well as being forced to drop out of school and live as a recluse due to other children bullying him.

Salman, who is the youngest of 11 children, saw his hernia continue to grow while his family failed to notice the seriousness of his condition as they mourned the sudden loss of his father Qadir Raheem, who died suddenly in a bike accident.

After making a 200-mile journey by bus to hospital, doctors told Salman’s mother Kiran Qadir, 49, they could not operate on his hernia until he gains weight and overcomes the pneumonia he is battling.

Salman Qadir is desperately waiting for surgery to remove a hernia from his belly button that is almost the size of two cricket balls. The growth has left him unable to walk properly

WHAT ARE UMBILICAL HERNIAS?

An umbilical hernia occurs when part of the bowel or fatty tissues pokes through a weak spot in the abdominal wall near the belly button.

Up to 75 per cent of babies born under 3.3lbs (1.5kg) develop umbilical hernias. Such infants are usually premature.

This is due to the umbilical cord passing through an opening in the abdominal wall while the foetus is developing.

Although this should close, if muscles fail to completely seal they leave weak spots for hernias to develop through.

Umbilical hernias look like 1-5cm lumps, which may be more obvious when the baby is crying or laughing.

Most umbilical hernias close by themselves by the time the baby reaches one year old.

Surgery may be necessary if it has not resolved by four years old.

In adults, obesity, coughing and multiple pregnancies raise the risk.

Family were too bereaved to notice his condition

Speaking of her son’s birth, Msn Qadir said: ‘Salman was born through a Caesarean delivery.

‘He was very weak and suffered from jaundice.

‘We all thought he would not survive but he did.

‘He used to have stomach problems and constipation but nothing serious.’

Aside from his initial health problems, Salman was like any other baby until a lump started to grow on his abdomen at six months old.

Due to his father’s recent death, Salman’s family ignored his condition at first.

Ms Qadir said: ‘We all were in shock after the death of my husband.

‘His elder brothers used to take him to a local faith healer and instead of any improvement his condition kept worsening.’

Salman’s hernia weighs 2kg (4.4lbs) and stops his clothes from fitting him properly 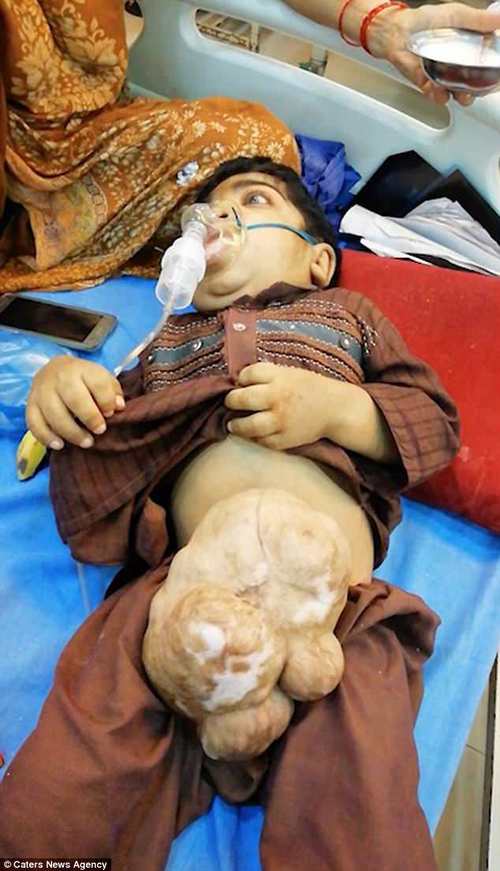 Not healthy enough to be operated on

Earlier this month, Salman traveled with his mother and eldest brother to the Jinnah Post Graduate Medical Centre in Karachi.

Dr Ayesha Majeed, who treated him, said: ‘The boy was admitted in the hospital after he complained of extreme pain in his hernia.

‘Initial tests suggest he is also suffering from pneumonia.

‘He must have had this hernia since his childhood but as the hernia was left untreated it has grown to this size.’

Dr Ayesha, who has never seen such a large hernia on a child before, said Salman is not ready for surgery, adding: ‘He is too weak.</p >

‘We are putting him on a proper diet so that he will gain some weight and get prepared for the surgery.’

The growth worsened over the years, which was not noticed by his bereaved family