But it’s her role as Alex Levy, a national news anchor dealing with sexism, age-ism, and #MeToo on The Morning Show that gives Aniston the most to work with. In it, she’s completely captivating.

All eyes are on Jennifer Aniston’s return to TV with The Morning Show, the first three episodes of which premiere on Friday, November 1 on Apple TV+. But take one look at her brand new Instagram account and you’d think Friends is back. Exhibit A: the reunion photo of the cast that nearly broke the social media platform. Exhibit B: a throwback clip of Aniston (as Rachel Green) with Witherspoon (as her younger sister, Jill) bickering over Ross (David Schwimmer). And exhibit C: When former Bachelorette Kaitlyn Bristowe commented on the aforementioned reunion photo asking whether Ross and Rachel were still together, Aniston actually responded with, “Well we’re on a break.”

But as much as I loved that (poorly lit) Friends reunion photo and the Central Perk nostalgia, it’s time to move on. Aniston is so much more than Rachel Green – and I think what you’re about to see on The Morning Show will finally show everyone just that.

“This is the best I’ve ever seen her,” says Mimi Leder, The Morning Show’s executive producer and director. “I’ve known Jen for years, starting when I was directing ER and she was across the lot doing Friends. She is fearless, she’s ferocious, and she’s a genius. And in this role, she’s the most vulnerable, the most honest, the most open.” 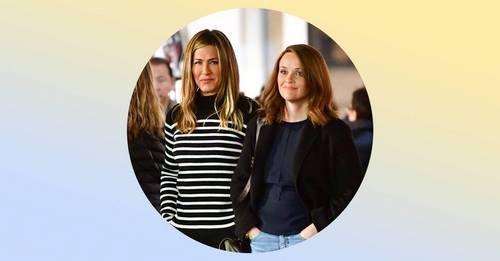 It’s high – but accurate – praise from Leder, who recently directed the Ruth Bader Ginsburg biopic On the Basis of Sex and was the first female graduate of the AFI Conservatory. “She has this ability to listen like nobody else,” she says of Aniston. “Starting on her first day of work, she came guns a-blazing, completely prepared.”

Leder is right: The Morning Show – which has already been renewed for season two – shows Aniston at her most vulnerable. It’s not the first time viewers have seen her in a darker part (once again, see Cake, The Good Girl), but this series allows her to go even deeper. She’s razor-sharp brilliant, whether she’s throwing out a sarcastic quip or about to crumble under the pressure of being a high-profile woman in an unfair industry. Her scenes with Billy Crudup, Mark Duplass, Steve Carell, and, of course, Witherspoon are so riveting they need to be viewed twice. That’s why critics have already been throwing her name in the Best Actress race for awards season.

Ask Aniston about this, though, and she’ll give credit to her secret weapon: her acting coach Nancy Banks, who she says helped her through the lengthy monologues and emotionally-taxing scenes. “She became this incredible tool for me, especially in this role, because the material is so dense and there’s so many levels that you’re reaching and coming down from and going back to again,” Aniston tells Glamour. “I don’t know how I could have done it without her.”

In fact, Reese Witherspoon – who calls The Morning Show one of the most challenging but most rewarding jobs she’s ever had – says Aniston’s desire to work with an acting coach shows her next-level commitment to the part. “Halfway through filming the first season, I was like, ‘Can Nancy help me, too? This is so hard! She was so thoughtful and encouraging to all of us.”

Aniston also relied on one-on-one time with ABC News anchor Diane Sawyer. “I asked her everything from, ‘What was the motive to get up and do this starting at 3 A.M. every day?’ to ‘How did you physically cope and emotionally cope?’ And, ‘How do you have a life with a partner?’”

Although Aniston has always been the interviewee on these morning news programs, she says she connected with the Savannahs and Gayles of the world in a very real way. “Just being a public figure and having to always have your game face on in the midst of whatever personally is going on, and feeling the desire to sort of isolate…I can relate to that.”