Chanel is the light at the end of the tunnel and today the set was a replica of a Parisian street’s rooftops… just like the ones the heroes in The Aristocats hop over and poets full of unrequited love and longing gaze out from.

The supermodels, the epic set, the little goody bag on our seats and, of course, the vision the most desired and recognised fashion houses in the entire world.

Every season, the last day of fashion month, the exhausted and jaded fashion pack perk up at the thought of Chanel.

The models – including Gigi Hadid and Kaia Gerber – picked their way over walkways between the chimneys – to a whimsical soundtrack by Stereolab, put together by longtime Chanel collaborator and ‘sound stylist’, Michel Gaubert. It was the dream of the chic Parisian ingenue made real.

Since Virginie Viard has taken sole control of the creative direction of Chanel, nothing has changed yet everything has changed. Viard was Karl Lagerfeld’s right-hand woman and with the company for 30 years so has always had a huge impact on the aesthetic of the collections but this season seemed to have a lightness of touch, a femininity and freshness that seemed perfectly in tune with how a woman would design clothes for women. It seems a no brainer but consider that fact that most creative directors and designers are men. Only a handful of women take the top jobs in Paris… Maria Grazia Chiuri at Dior, Clare Waight Keller at Givenchy, Sarah Burton at Alexander McQueen and… and… 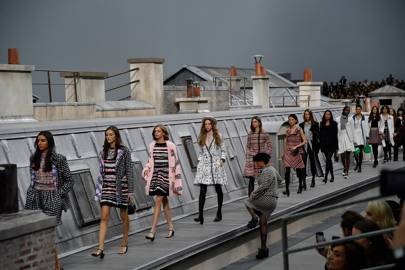 The clothes were exquisite, obviously. Puffs of satin flared out into skirts, nifty skirt suits with black opaque tights, boater hats and ruffles everywhere. Cool jeans came in unwashed blue. Matching jackets had slouchy oversized shoulders and sleeves and broderie anglaise trims on them. Pops of highlighter pink were the main colour story and all the shoes looked easy to walk in with nothing bigger than a block heel a couple of inches high. 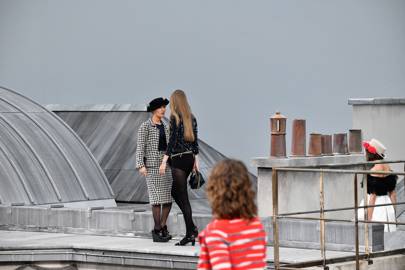 As the last looks came round some of the models started to hang out on the rooftop, waiting for the finale and the other girls to finish their walk. The audience clapped politely for a few moments then held up their phones to video the end – as is standard at every show. But what wasn’t standard was the woman (dressed in a monochrome tweed skirt suit, jaunty boater hat and super sized clumpy black heels) who ran out of the audience, scrambled up onto the rooftop set and took her place in the finale walk.

Sometimes shows have a surprise ending… like the time street dancers ran out of the aisles onto the catwalk at Dolce Gabbana to shake it with the models… but this was not part of the show. There have also been PETA activists who storm the runway with a message to spread.

Security guards tried to work out what just happened as today’s gatecrasher, who seemed to want nothing more than a moment in the spotlight (according to reports she was a YouTuber), walked straight up to Gigi for a pose off. But, with superhero calm, Gigi just led her off the set. No wannabe can detract from Chanel and no one messes with Gigi Hadid.

This lingerie brand is made for literally EVERY body

25 of the Best Things to Do During Fall